The secret history of terror in Europe: How our blindness to a century of mistakes is making everyone less safe

After the first Great War, Europe carved up the Middle East. Long since, we're still feeling the effects 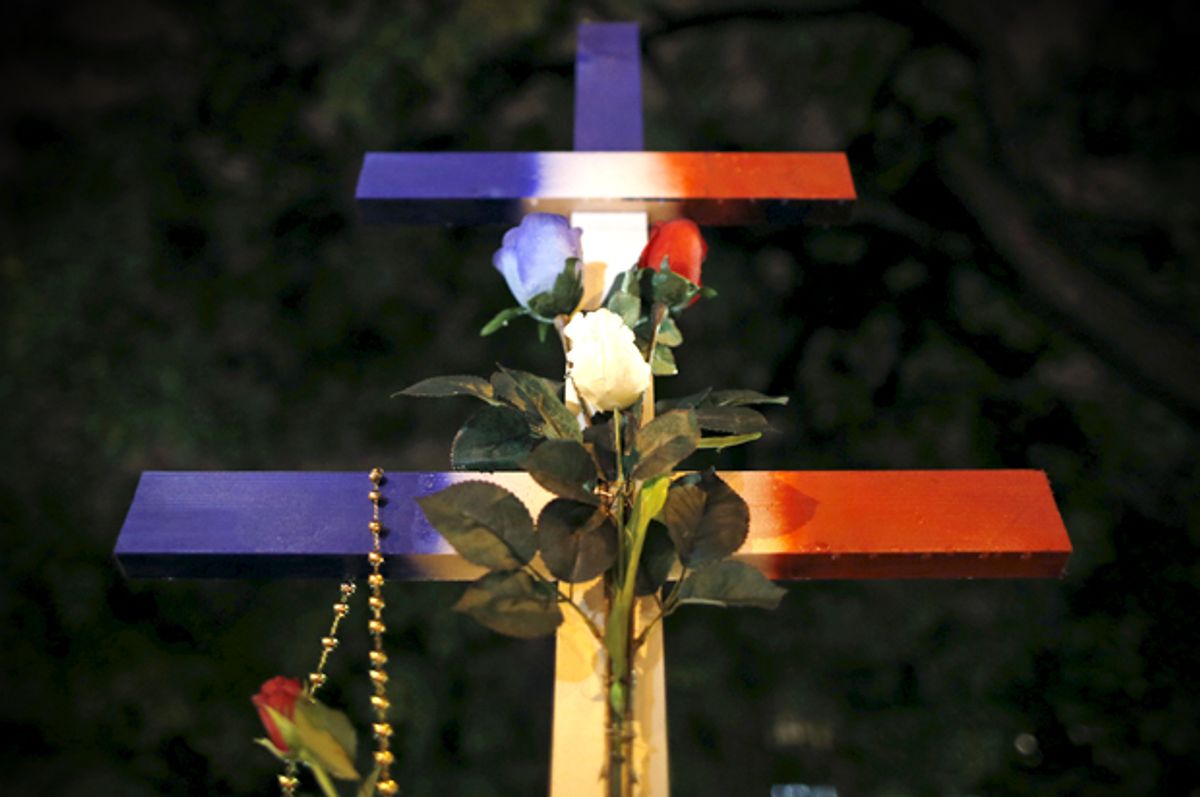 While embracing France, invoking the spirit of "Nous Sommes Tous Francais" (or "We are all French"), it's also critically important to have deeper analytical discussions about unresolved issues pertaining to the inextricable bond between imperialist Europe and the Middle East.

It's time for the world to stop circumventing the unequivocal truth that much of what has happened in Europe with the rising terror threat level and the bloody massacres in Paris -- labeled soft target attacks -- is rooted in European colonialism of the Middle East. We are not doing anyone justice by pretending these planned coordinated attacks transpired in a vacuum or are just isolated incidents with no basis in past histories.

Much of what has happened recently, whether in Paris, Raqqa, or Beirut, Lebanon, appears to be predicated on policies established by three important early 20th Century documents: a clandestine understanding known as The Sykes-Picot agreement of 1916; the Treaty of Sèvres  signed in 1920; and the Treaty of Lausanne of 1923 that superseded The Treaty of Sèvres -- which advocated and facilitated the dissolution of the Ottoman Empire. The Treaty of Lausanne presciently delineated focus areas with respect to Turkey, Syria, and Iraq -- three current hot spots in the region -- by grouping all three in Section III of the treaty.  In an article for the Middle East Policy Council journal published in the Winter 2011 issue with the headline "The Troubles in Syria: Spawned by French Divide and Rule," Dr. Ayse Tekdal Fildis makes an excellent argument that highlights the seed-planting role of European imperialist regimes:

Great Britain and France transformed what had been relatively quiet provinces of the Ottoman Empire into some of the least stable and internationally explosive states in the world. As a consequence, the First World War agreements are at the very heart of the current conflicts and politics in the Middle East. The partition lines in the Arab provinces of the Ottoman Empire originally laid down the terms of the secret Sykes-Picot Agreement in April-May 1916. The agreement gave Mesopotamia (Iraq), the Gulf and the regions bordering Palestine to Great Britain, and Syria and most of the eastern part of the region to France.

It becomes more and more obvious with each passing day that the governments and law enforcement entities of Europe have failed to address a number of issues: growing right wing xenophobic, anti-immigrant and anti-Islamic sentiments; how to solve colonial injustices in a postcolonial world; the home grown European Jihadi terrorism phenomenon; the handling of refugees in a humane, consistent and equitable fashion; and what appears to be a proliferation of under-the-radar and on the radar individuals who clearly think they have nothing to lose and are willing to destroy anything in sight and kill ruthlessly without blinking. Three of the seven individuals who carried out the attacks at Bataclan, the Stade de France and several restaurants were known French nationals. One of those men was a French national from the Courcouronnes section of Évry Ville Nouvelle who had also been on the radar for years and was classified as an extremist since 2010. The alleged mastermind of the Paris attacks, Abdelhamid Abaaoud, was a Belgian national -- and Belgium is home to numerous terror cells, with Abaaoud having been connected to a militant cell headquartered in the Molenbeek section of Brussels. Abaaoud was killed November 18 after a battle with police that lasted between six and seven hours. Police pinpointed Abaaoud's location after tapping the phone of a woman named Hasna Aitboulahcen, who also died during the shootout.

The day before the Paris attacks, Pentagon officials ascertained that Mohammed Emwazi, aka "Jihadi John," the figure cloaked from head to toe in black who is thought to be the man standing next to beheading victims in ISIS videos, was most likely killed by drone strike in Raqqa, Syria last week. Emwazi, responsible for possibly at least seven beheadings, grew up in London and had possibly been on the MI5 radar as early as 2009.

All of this begs the question: Why are governments and intelligence agencies failing so miserably at stopping these terror threats? Repeating the same mistakes over and over seems to have opened the door to the proliferation of terror cells in London, Paris and Brussels, among other places. Emwazi, for example, grew up in London. Yet, in the wake of the Paris attacks, there has been much focus and speculation around a Syrian passport tracked through Leros, Greece, which has now, according to Agence-France Presse been determined to either be a fake or stolen.

Over-speculation and false information has created an extremely dangerous atmosphere and unnecessary burden on already over-burdened, dispirited Syrian refugees whose situation has been exacerbated over the years by a failure of international policy. This has made it easier for far right-wing nationalists like France's Marine Le Pen to make inflammatory, hateful statements about immigrants. Le Pen, leader of the National Front party, often makes remarks that mirror the same kind of vacuous, anti-Islamic remarks made by right wing politicians and people like Bill Maher, all of whom prey on audiences suffering from America's selective amnesia when it comes to history, xenophobic and ignorant anti-immigrant sentiments, and the position of the world outside the Middle East and North Africa which seems to embrace the idea of remaining willfully obtuse as far as the origins of the region's conflict.

It doesn't help that American politicians like Bernie Sanders, for example, make the well-intentioned but incorrect assertion that these problems began with the war in Iraq -- a point made for the sake of debate against Hillary Clinton, who voted in favor of the war. Obviously, that vote has haunted her for years. Even worse than the Sanders misstep is the preposterous idea advanced by Republican Presidential candidate Jeb Bush that the United States should basically repeat the same mistakes made in Iraq. Ivy Ziedrich became a hero when she told Bush, "Your brother created ISIS."

The Western response to terror which the West fan the flames of tells us something about how this world really works on a number of levels. The double-tap, twin suicide bombings in Beirut, Lebanon which claimed the lives of at least 43 people and injured hundreds more last Thursday -- the worst violence in more than two decades -- drew much less attention. In response to recent events, Russia is perhaps attempting to align itself with anti-Daesh forces (Daesh being another term for ISIS) in the West's fight against ISIS in Syria. The slaughter of possibly up to 2,000 people by Boko Haram in Nigeria earlier this year, labeled the Baga Massacre, also drew comparatively little attention. Israeli Prime Minister Benjamin Netanyahu's deplorable policies against African immigrants within Israeli borders are treated like elevator music no one wants to listen to. When 147 people were killed at the Garissa University College in Kenya back in April, the world didn't quite respond in the same fashion as it has to the attacks in Paris. What did the Kenyans get in response? Crickets.

The world didn't get too upset when the three Kurdish women political activists were assassinated in Paris in 2013. And while France's President François Hollande has labeled the heinous, diabolical attacks of suicide bombers and shooters as "an act of war," authorizing the continuous bombing of ISIS targets in Raqqa, Syria, the question then becomes: What happens after the bombing stops? After all, Germany has taken in some 800,000 Syrian refugees while France has only greeted 10,000 to 20,000 Syrians -- and Syria is its former colony. So much for French socialism, right? The post facto raids might be a case of too little too late. The West sat back for months and did nothing while ISIS terrorized Muslims and others in the Middle East but now wants to turn the tables on Muslim people and declare them Public Enemy No. 1. What gives? And what will be the policy concerning Belgium? France was given the mandate for Lebanon and Syria at the San Remo Conference of 1920, and look where we are today. Beirut, Paris and Syria have all been struck within a matter of days. Blaming the Syrian escapees who are literally running for their lives to escape the wrath of ISIS and the Assad regime is simply unacceptable. This nonsense needs to stop today. And while France still has responsibilities in the Middle East, even as it. Chris Graham, an Australian writer, made some great points about the Western response to terrorism in a recent opinion piece which ended with a sobering thought:

Westerners are finally being given just a small taste of the constant fear that people from other nations have endured for generations. So solidarity with, and compassion for, the French is a good thing...But solidarity and compassion for the victims of terrorism everywhere is even better, in particular those who've fallen victim to the terrorism sponsored in all our names."

Perhaps what we all need to do, while embracing the people of Paris, Beirut and any of the other places attacked recently, is create a new world where difference is celebrated, where governments are truly held accountable and one that makes the terrorists abandon their senseless campaigns which have claimed the lives of people all around the world."