We have the Woodrow Wilson/P.C. debate all backwards: Protesters are forcing a debate Princeton has whitewashed for decades

Princeton placed Wilson on pedestal for decades. Protesters tell a fuller story. So exactly who is stifling speech? 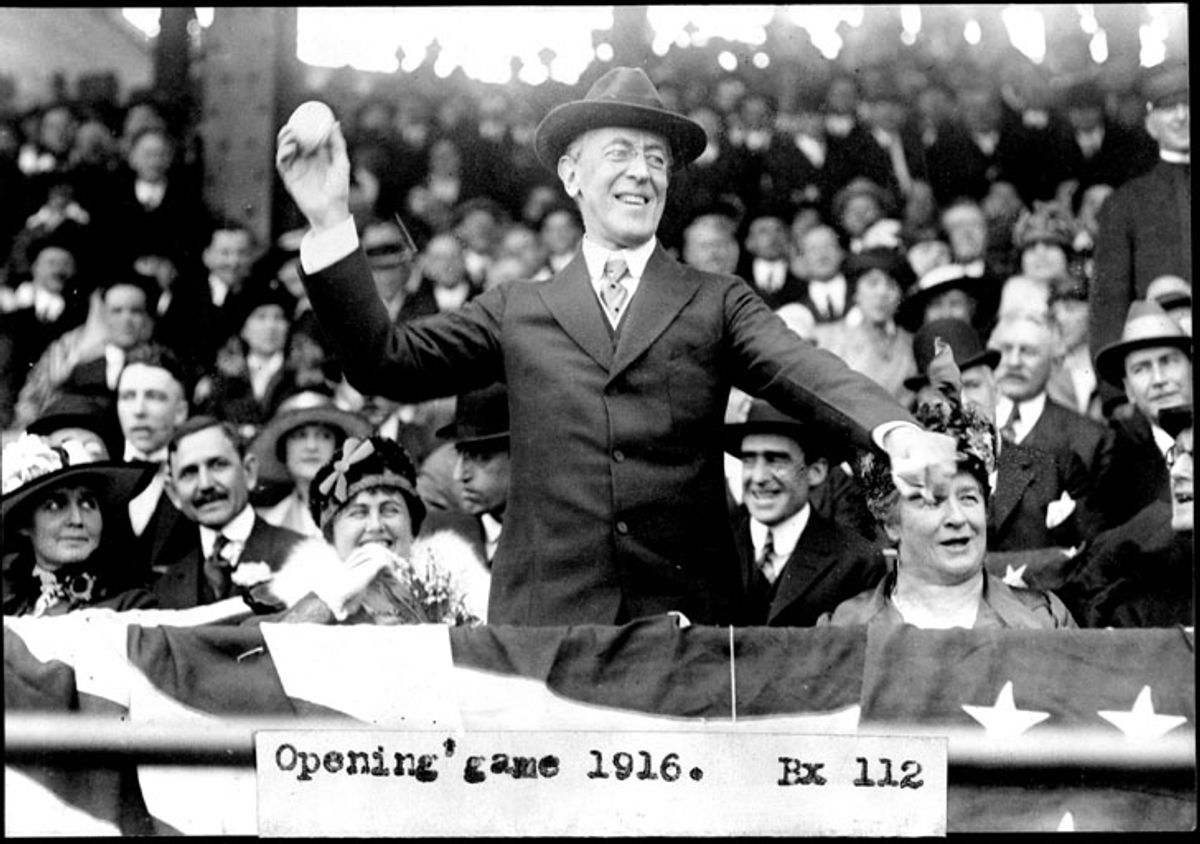 I have three thoughts on the Woodrow Wilson/Princeton University controversy, which now seems, at least temporarily, to have come to a conclusion.

First, in discussions with various people, two of the most common responses I've heard to the Princeton students’ demands that Wilson’s name be removed from all campus buildings are these:

1. Woodrow Wilson may have been a racist, but he was a great president, contributing to all manner of progressive policies. Wilson's racism was, at most, a sideline interest, a passion he pursued during his off hours, after the real business of daily governance was done. It has nothing to do with his presidency or legacy.

2. Yes, Wilson was a racist, but so are all white people in the United States. Always have been, always will be. (Whether the people making these claims are including themselves in this characterization remains unclear.) So why single him out?

As it happens, both claims are untrue. Wilson wasn't simply a personal, after-hours racist. Nor he was he just a creature of his time, reflecting a popular racism that was already firmly in place. As president, Wilson actively worked to nationalize — some might even say internationalize — the Southern position on race, most notably by segregating, and implementing new modes of discrimination within, the federal bureaucracy, which in the years leading up to his administration had offered African Americans some possibility for advancement. Racism was central to his politics, and he made specific contributions to advancing its cause in America.

It was also a cause he had long thought about, and to which he devoted countless scholarly hours. In 1901, while he was a professor at Princeton, Wilson penned an article for "The Atlantic Monthly" titled “The Reconstruction of the Southern States.” Here’s what he said about the freed slaves after the Civil War:

An extraordinary and very perilous state of affairs had been created in the South by the sudden and absolute emancipation of the negroes, and it was not strange that the southern legislatures should deem it necessary to take extraordinary steps to guard against the manifest and pressing dangers which it entailed. Here was a vast 'laboring, landless, homeless class,' once slaves, now free; unpracticed in liberty, unschooled in self-control; never sobered by the discipline of self-support, never established in any habit of prudence; excited by a freedom they did not understand, exalted by false hopes; bewildered and without leaders, and yet insolent and aggressive; sick of work, covetous of pleasure,—a host of dusky children untimely put out of school....They were a danger to themselves as well as those whom they had once served....

One year later, he was made president of Princeton.

If you're a high school student checking out the university on a campus tour, here's how the university's tour guides might describe this former university president to you:

Woodrow Wilson's association with Princeton began when he arrived as an undergraduate in the Class of 1879. During his college years, Wilson was secretary of the Football Association, speaker of the American Whig Society (now the Whig-Cliosophic Society), and managing editor of the Daily Princetonian. In 1890, Wilson returned to Princeton as a professor and in 1896 he pioneered the theme "Princeton in the Nation's Service" in a speech at the University's sesquicentennial celebration.

Renowned as a warm, high-minded scholar, Wilson was elected Princeton's 13th president in 1902. As president, he initiated the broad distribution requirements and raised the University's admission standards. In 1905, Wilson introduced the preceptorial system to foster a personal and intimate relationship between teacher and student. In terms of social and residential life, Wilson promoted a "Quad Plan," inspiring the residential colleges we have today.

Wilson resigned the Princeton presidency to begin his political career in 1910, running for and winning the governorship of New Jersey, where he quickly established himself as the nation’s leading progressive politician. He was elected President of the United States in 1912 and re-elected in 1916. For his efforts at Versailles including his League of Nations proposal, he was awarded the Nobel Peace Prize, the only Princetonian to receive this honor.

And that's why we owe these students at Princeton a debt. Universities are supposed to be educational institutions: Their first educational constituency is their students, of course, but their second is the nation. Most of us are fairly ignorant about how central race and racism were to Wilson's politics. By forcing this question, not only on Princeton's campus but throughout the country, Princeton's students are actually doing the job that Princeton itself is supposed to be doing: they're educating all of us.

Or pushing us to educate ourselves. I know they forced me to scramble back to the articles and books I once read, prodding me to get clear on questions and answers I used to have a firmer grasp on: What was Wilson’s position on self-determination in Africa again? What's the connection between slaveholder John C. Calhoun's theory of the concurrent majority and Wilson's own ideas about representation again? Why did the West Indian-born activist Cyril Briggs hate Wilson so much again?

Second, the resolution to the immediate crisis of the students' occupation of the president's office is that Princeton will now consider whether to expunge Wilson's name from its buildings. Wilson is the crown jewel of Princeton: he was its president, his name adorns a residential college there and Princeton's school of public policy. When I was an undergraduate there in the late 1980s, the only bad thing anyone had to say about him was that he once tried to get rid of the university's stuffy eating clubs. (Some of us wish he had succeeded, but that’s another question.)

But now the university is going to have an opportunity to debate Wilson's legacy. Not just its students, faculty and staff, but also its alumni, who include many prominent figures in the media and politics. Because of Princeton’s place in national politics and culture, the conversation is sure to get a lot of attention. Vested interests will be challenged; passions will be roused; arguments will be had. History, which too often remains the preserve of professors and scholarly journals, will become genuinely public history.

In the last few weeks, campus activists have been portrayed as the sworn enemies of freedom of speech. But what have these activists at Princeton achieved if not a flowering of dialogue and debate? Not only have they asked for more discussion (one of their demands includes more courses on ethnic studies) but so have their actions — taking over a campus building, refusing to leave until their demands have been met — produced more discussion. And are sure to produce even more.

Too often in our debates about freedom of speech, we assume that it already exists and that it is campus activists, particularly over questions of race, who threaten it. But what Princeton’s students have shown is that, before they came along, there was in fact precious little speech about figures like Wilson, and what speech there was, was mostly bland PR for tourists and prospective students. Even more important, Princeton’s students have shown us that it is precisely the kinds of actions they have taken — which are uncivil, frequently illegal and always unruly — that produce speech. Not just yelling and shouting, but also informed, deliberative, reasoned speech.

Last, one of the most common objections to these types of moves to get rid of names on buildings or monuments — in addition to these Princeton students, there’s been a move at Yale to get rid of John C. Calhoun’s name from one of its residential colleges — is that we are erasing or repressing the past. My friend Jim Livingston, the brilliant Rutgers historian from who I always learn something, makes that claim here. I would be less than honest if I didn't say that I shared that concern. Purification rituals always make me nervous.

But if you’re looking for symbols of purity, you’d be hard pressed to find a better one than Princeton's Woodrow Wilson School of Public and International Affairs: the building is as white as the driven snow. Or take a tour of the campus, where you'll hear tales of Wilson's storied presence there. Listen to how Wilson gets repeatedly invoked by college administrators in campus addresses. At Princeton, the man is a monument, a monument of power that is pure.

While my general approach to history is one of modulation — past imperfect, always — I'm leery of those who would say, against the students, don't erase the past. I'm leery of these critics’ timing: if there's any erasing going on here, it's in the daily practices of Princeton. In those campus tours, those campus addresses, the general celebration of the man. Why haven’t we heard criticism of how the past is being erased by Princeton’s celebration of Wilson?

I’m also leery of these critics’ assumptions that removing a name from a building is about erasing the past. As if once the name is gone, all conversation stops, all memory disappears. As if the decision to remove Wilson’s name won’t itself become part of the story of Woodrow Wilson at Princeton. As if history is frozen in amber.

Besides, there’s any number of ways to take Wilson's name off a campus building — without erasing the past. Princeton could put up a plaque that says, "This building was once named after Woodrow Wilson in honor of his achievements as president of Princeton, governor of New Jersey and president of the United States. In 2015, after lengthy campus discussions of Wilson's racial policies — including his decision to segregate the federal bureaucracy — the university decided to remove his name from this building and to rename it the W.E.B. DuBois School of Public and International Affairs, in honor of Wilson's most formidable critic on matters of race."

And then we could have another debate: about how DuBois would have been appalled to see his name adorn a building on a campus where dining hall workers, many of whom are black (it’s telling that the demographic on campus that has the highest percentage of African Americans is “all other staff”), make less than a living wage if they are parents and are often treated as if they were servants.