An activist is beaten and taunted with racial slurs at a Trump rally in Alabama. This is just the beginning 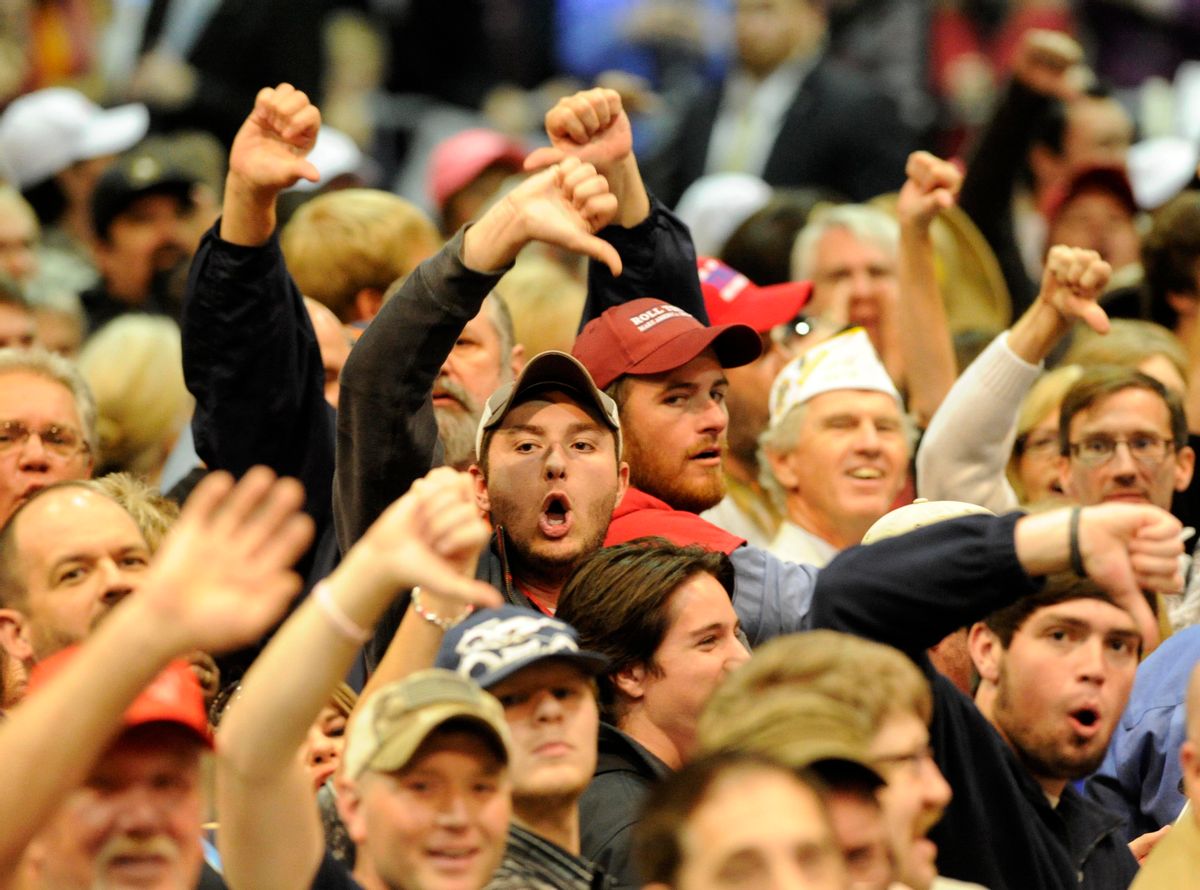 A protester from the Black Lives Matter movement was beaten at a Donald Trump rally held on Saturday in Birmingham, Alabama.

At least a half-dozen attendees shoved and tackled the protester, a black man, to the ground as he refused to leave the event. At least one man punched the protester and a woman kicked him while he was on the ground.

All of the attendees who were involved in the physical altercation with the protester were white.

The protester appeared to be shouting "black lives matter" and later removed his sweatshirt to reveal a shirt with those words.

Mercutio Southall Jr., the man who was assaulted, offered these additional details:

The Black Lives Matter protester attacked during Donald's Trump's Birmingham rally said he was punched, kicked and called "n****r" while a group of eight or nine people were on top of him…"

He said people encircled him, and he was being pushed and punched from every direction. Someone hit him from behind, and the next thing he knew, he was at the bottom of pile. He was kicked in the stomach, and the chest, both men and women. "I got enough people off of me that I was able to get up a little bit,'' he said. "Somebody got behind me and started trying to choke me out."… Southall said he was repeatedly called a "n****r" and "monkey" and told his life doesn't matter.

“Maybe he should have been roughed up, because it was absolutely disgusting what he was doing,” Trump said on the Fox News Channel on Sunday morning. “I have a lot of fans, and they were not happy about it. And this was a very obnoxious guy who was a trouble-maker who was looking to make trouble.”

In their current state of outrage about anti-racism protests at America’s colleges and universities, “political correctness,” and Black Lives Matter activism, movement conservatives are refighting the Culture Wars of the 1960s and 1980s. Once more, the university is their enemy both because of the American right’s deeply rooted anti-intellectualism, as well as how it is one of the few spaces where women, gays and lesbians, and people of color are (incorrectly) imagined as having a voice and some pittance of power.

Because conservatives exhibit a high degree of social dominance behavior, any threat to what they view as “the natural order of things” is met with fear, a sense of victimization, and feelings of hostility. This dynamic helps to explain the right-wing’s current obsession with “political correctness” and “safe spaces.” It also reveals the glaring difference between how movement conservatives and liberally minded people understand the world, and the language they use to describe it.

As originally used and intended by liberals and progressives, a “safe space” is one where non-whites, gays and lesbians, women, the differently-abled, and other stigmatized groups and individuals, can be momentarily free from harassment, marginalization and discrimination.

Liberals use the phrase “political correctness” to describe a basic principle that individuals should try to treat one another with dignity and respect.

Conservatives (who of course practice their own type of ideological orthodoxy as “political correctness”) are enraged by these notions because they view them as a limitation on their ability to demean, harass and abuse other people.

Moreover, conservatives are especially upset by “political correctness” because it is often an assertion of agency and a demand for respect from marginalized groups against dominant, white, male, institutional authority.

The divergent reaction to “safe spaces” and “political correctness” from conservatives and liberals also signals to another socio-political fact. American society is structured around maintaining, promoting, and protecting unearned advantages, life opportunities, and resources for white people. As viewed through the lens of the color line, almost every aspect of American life is a “safe space” for white people. This “safe space” for whiteness is reinforced by many factors, including, but not limited to, the mass media, residential and housing segregation, racially homogeneous interpersonal social networks, as well as a racist “criminal justice” system. And when this protective bubble of white privilege is pierced, or in any way challenged, many white folks respond in extremely negative, hostile, and immature ways.

When people tell and show you who they really are, you had best pay close attention.

When Black Lives Matter protesters exercised their constitutionally protected right of free speech at Hillary Clinton’s and Bernie Sanders’ rallies earlier this year, they were not physically assaulted by those in attendance.

In contrast, when Black Lives Matter and other protesters have intervened at Donald Trump rallies they have been met with thuggish violence by his public.

It is also telling that Donald Trump’s supporters began to triumphantly yell “all lives matter” while Mercutio Southall Jr. was taken away by police.

This slur is a rejection of the basic principle driving Black Lives Matter: African-Americans should have same the full and equal human rights, protections, and freedoms as whites. Any other civic arrangement should be unacceptable in a country that purports to be the greatest country on Earth.

To stand against Black Lives Matter is to agree that black people should in fact be second class citizens in their own country.

Consequently, it has become abundantly clear in recent months that “All Lives Matter” is the new “White Power!” for the Age of Obama.

Research on political attitudes, values, and American history has repeatedly demonstrated the many ways that conservatism and racism is now the same thing in post-civil rights era America.

The rise of the Tea Party, the GOP’s extreme rightward shift, vicious and ugly racially driven animus and conspiracy theories towards Barack Obama, the efforts to destroy the gains of the civil rights movement, and now the Know-Nothing-like xenophobia and prejudice against non-white immigrants and Syrian refugees are current events as an example of the Republican Party’s white supremacist orientation and brand.

[This is seen online as well. The YouTube clip of the fracas in Birmingham, Alabama, has hundreds of comments—many of them are overtly racist, use racially violent anti-black language, lie about how “Black Lives Matter” is a “terrorist organization,” and deploy the slogans “White Power” and “All Lives Matter” interchangeably.]

And because he appeals to the most strident, immature, and reactionary part of the American right-wing id, Donald Trump’s rallies are safe spaces -- for nativism, white racism, and increasingly, violence.