Redskins player blames biased refs who hate the team name for loss: "We shouldn’t have to be punished for that"

Jason Hatcher holds firm against the league and the officials: "I don’t give a crap about the name" 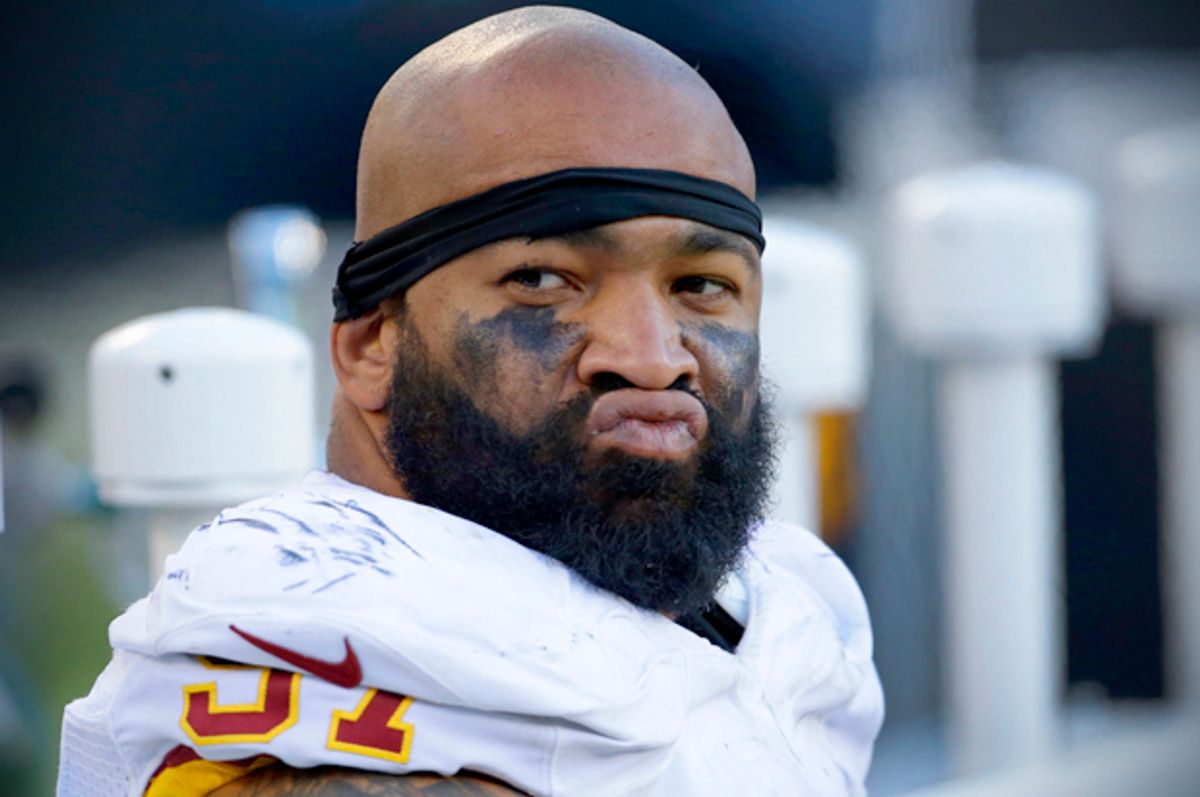 Football fans and players, just a heads up. There's a full moon this week. Adele has a number one Billboard album. Both Glenn Rhee and Jon Snow are totally alive. I mention this because you might be in need of a completely reasonable and logical excuse for your team losing next time. You're welcome, Jason Hatcher!

Remember when you thought we'd reached peak weaksauce explanations just last week, when ostensibly legitimate news organizations gave a veneer of legitimacy to the bonkers theories that Olivia Munn's relationship with Aaron Rodgers was the root of Green Bay's dismal three losses in a row? ESPN's Rob Demovsky went so far as to insinuate "possible off-field issues," noting, "Lions reporters said they spotted Rodgers’ girlfriend, actress Olivia Munn, at Lambeau Field on Sunday. Sometimes it's easy to forget that professional athletes have lives away from the field, and you never know what could be going on in their personal lives." Both the Washington Post and Fox Sports likewise jumped on the story, quoting one concerned tweeter who theorized that Munn was likely behind the reason "God has taken his hand of blessing off the Packers players."

Munn, because she is an adult and a smart person and also, of course, not responsible for the outcomes of football games she herself does not play, called BS on this line of reasoning late last week, pointing out along the way that "If ur going to validate a 'fan's' comments about me, please also include if he's a racist." And she added, "Playing it fast & loose w/the journalism @RobDemovsky. Your professional skills are lacking... you must be having personal problems at home." Boom!

But Packers fans aren't the only ones looking to make sense of how a professional team of athletes could lose a game. Speaking with the Washington Post this weekend, the Redskin's defensive end Jason Hatcher expressed his thoughts about what happened during his team's 44-16 loss to the Panthers. After a controversial unnecessary roughness call when the game was still tied at 14-14, fans were left steaming — and the Redskins went on to defeat. Searching for explanations post-game, Hatcher mused, "It’s going to be hard, you know, we fighting against teams and the referees. It just is what it is. I’m not saying this out of character to get fined, but it is what it is. I don’t know if it’s about the name or what, but at the same time, we play football too. We work our butt off too. Don’t single us out. At the end of the day, it’s the name."

He continued: "Don’t worry about the name – we players and we work our butt off too. I’m just frustrated with it. We shouldn’t have to be punished for that. It’s been every game, calls after calls that should’ve been made in our favor, but it goes to them. It’s just not right. We in the league too. We’re National Football players. We got a team too. We go out there, and we sweat and work hard too. I don’t give a crap about the name. We are players. We’ve got feelings too, and we want to win, too."

Later, on Instagram, he added, "I’m done being quiet. Freedom of speech right? We done being slaves to this league…. Don’t punish us for something we can't control. We are the redskins let’s move on. God forgive so should yall. Everyone’s accountable!!!"

The Washington Redskins have in recent years come under intensifying scrutiny for the team's hopelessly offensive, outdated name. Yet despite ongoing pressure — including a U.S. Patent Office Trademark Trial and Appeal Board ruling that the name is “disparaging to Native Americans,” the organization has been holding on to it like, well, you know, sports metaphor. But while many of us here in the non-racist terminology using 21st century oppose the continued use of the team's name, it's pretty tough to make a case that officials are punishing the Redskins' players for wearing it. And just like last week's Munn-blaming, it's funny, in a sad way, watching a bunch of grown men sitting around making lame excuses for a defeat. Whatever causes any particular loss, you don't need to an intimate follower of the game to know it's not the fault of a beautiful woman, or an ugly name.