The sounds of “Fargo,” 1979: The musical masterminds behind TV’s best soundtrack

Perfect covers of Coen brothers favorites, spot-on period tunes — and the song that blew the budget is yet to come 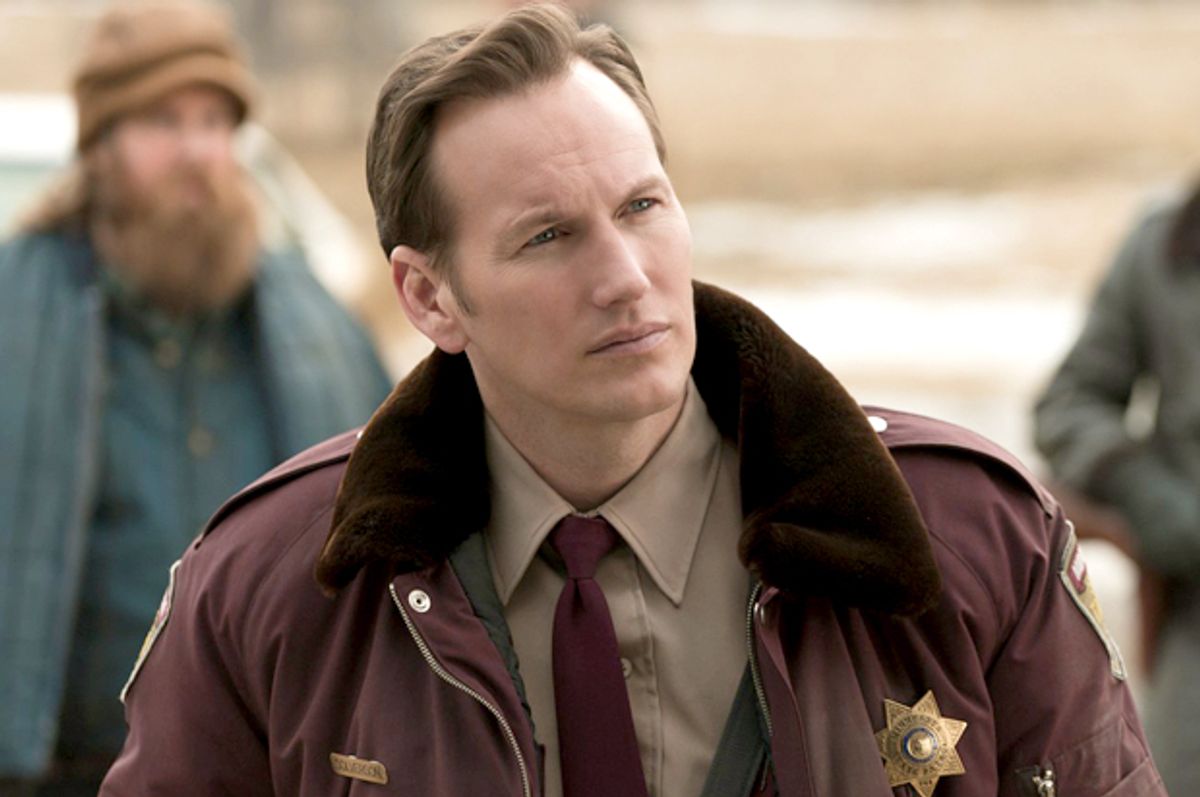 The second season of “Fargo” is the best drama currently on television, far surpassing its own very fine first season. The FX production, which airs Mondays at 10 p.m., is a master class in acting, with consummate performances from Patrick Wilson, perfectly cast with his Gary Cooper presence in a show that is as much a western as a crime thriller; Jean Smart as the tough and tender matriarch; Jeffrey Donavan as the warmonger Dodd; Ted Danson in his best role since “Cheers”; and so many others. And the mastery doesn’t stop there: look at the production design, direction, cinematography, sound design, the incredible writing, and just about everything else. But perhaps the most interesting aspect of all is the music.

There’s no doubt that the score by Jeff Russo (“Manhattan,” “The Returned”) is among the most memorable and stirring in recent memory. But what tells us just as much about the characters, the time period and the sense of place are the musical selections that have been picked by showrunner Noah Hawley and music supervisor Maggie Phillips.

This season of “Fargo,” set in 1979, is using music in a more interesting way than any other show on TV right now. Whether it's the 1960s country crooning of Wayne Chance on “Send Her to Me,” Fats Domino setting the scene with “Kansas City,” Fleetwood Mac rocking out to “Oh Well,” or the portentous laments of Gustav Mahler, each song is adding another layer to a show that is already like a lovely onion we continue to peel back, revealing more emotion, trouble, and beauty.

Patrick Wilson, known for films like "Little Children" and "The Conjuring," as well as the groundbreaking miniseries "Angels in America," is a comforting force as one of the main stars of the show and his performance is already garnering well-deserved Emmy buzz. With the looks of a matinee idol from the Golden Age of Hollywood and an intelligence that burns through the screen, Wilson’s Lou Sorenson is the moral center of the show whether he’s quietly worrying over his cancer-stricken wife as he stares out the window at the falling snow or engaged in a face-off with a lynch mob at the jail that is reminiscent of the classic western "Rio Bravo." Wilson says the music has become absolutely “vital” to the success of the series. “Particularly with this show, which has taken so many themes from the '70s, from a pre-Reagan, post-Vietnam America struggling with an oil crisis and the awareness of UFOs,” he says.

This effectiveness is due to the vision of Hawley and particularly to Phillips, whose widest-seen work as a music supervisor has been on films such as “Safety Not Guaranteed,” “Cyrus” and “Jeff, Who Lives at Home,” as well as the new HBO series “Togetherness” from the Duplass brothers.

Phillips has done for this season of the show what T Bone Burnett did for the Coen brothers film “O Brother, Where Art Thou,” adding nuance to scenes and characters through musical selection. “O Brother” was a movie soundtrack that became a cultural phenomenon, bringing old-time and Appalachian music to the mainstream and arguably paving the way for acts like the Avett Brothers and Mumford and Sons to use their banjo stylings to gain widespread acceptance. Phillips has managed to balance well-known tracks with truly obscure songs that light up social media as soon as their episodes air.

Phillips says she has worked closely with Hawley to create the sound of the show.

“Noah had given the sound a lot of thought and had some specific ideas. I knew as soon as he started playing us some of his ideas that this job was going to be unlike anything I’ve ever done before," said Phillips. "The first two songs were Billy Thorpe’s ‘Children of the Sun’ and Jeff Wayne’s ‘The Eve of the War.’ (He) broke it down into a handful of musical directions -- different worlds he wanted me to explore; for example, prog rock, girl punk bands, women’s (or womyn’s) music, music from Kansas City, etc.”

Phillips set out on ardent research and eventually sent a long playlist — “what was probably way too much music,” she says — to the showrunner. “Luckily, some of it worked. It was a great collaboration.”

Her research paid off, allowing viewers to disappear into the world and time period of this season of “Fargo.” For one single background song — “Song of the Soul” by Cris Williamson, a musical icon for lesbians of the period -- when Constance is driving Peggy home from the beauty shop, Phillips did deep research into the history of womyn’s music, a period when women were so ostracized by the recording industry that they took matters into their own hands, starting their own labels, promoting their own music, and putting on their own festivals. The fruit of her labors was only one song, but one that fleshes out Constance, a fiercely independent gay woman in a time when that went against all of the norms.

There’s Bobbie Gentry with her songs of burgeoning independence like “Reunion” and “He Made a Woman Out of Me” as commentary on a show populated by strong and fierce women, a show that appears to be about the men only on the surface. “They are the strongholds this season,” says Phillips. “They keep everything together, or at least try.” These strong female characters also lead to amazing performances from the likes of the aforementioned Smart, Dunst as the maybe-sociopathic Peggy, and in a deeply moving performance, Cristin Milioti as the witty and tenacious Betsy Solverson. Or the use of Burl Ives’ “One Hour Ahead of the Posse,” which single-handedly builds on the All-American-1950s-man appearance of Ed (played by Jesse Plemons) but also comments on his do-anything-for-my-woman darkness (his character calmly does for meat grinders what the 1996 film "Fargo" did for wood chippers).

Then there is a song like the one that ushers in the opening of Episode 3. As character-epitomizing scenes of each of the major players are shown to us in split screens, we hear the surreal and driving magic of war drums and childlike vocals in 1971’s experimental French-Japanese hyrbid “Yama Yama” by Yamsuki. The track perfectly conjures the building tension of the impending war between the Gerhardts and the Kansas City mob while managing to get us into the minds of several very different characters. Phillips says the song was so perfect she knew she had to use it. “Super catchy and frivolous but dramatic at the same time. We tried that song in a few places…it felt perfect there.” Phillips says it comes from a playlist called “Treasures” she keeps on her computer. “I save songs I love for the right time.”

Perhaps this is the true magic of the way music is used in the series. Wilson points out that nothing is ever expected. “[They’ve] managed to find thrilling hits from the time that haven’t been overplayed in every '70s throwback film. Just about every Vietnam-era film has either Hendrix, Cream or [Van Morrison’s] 'Brown-Eyed Girl,'” Wilson says. “It’s so refreshing to see these songs amplify tension and set tone, without reminding us of another film or show.”

The result is that many of the most memorable scenes from the show cannot be separated from the soundtrack. Simone (Rachel Keller, in a star-making performance) lounging nude on the bed with the scene-stealing, Lewis Carroll-quoting Mike Milligan (Bokheem Woodbine) while Michel Polnareff’s “Historie de Couer” plays, or Simone again, smoking a joint and driving to a rendezvous with Mike as she listened to the Dramatics. Peggy boarding the bus to the lyrics “Wash away my trouble/wash away my pain” of Three Dog Night’s “Shambala” and thinking herself very clever for selling the incriminating car. J.C. Akins’ old-style blues of “I Love You” summarizing Ed’s unconditional love for his illogical wife as they prepare for a supper of Hamburger Helper and Tater Tots.

The song selection and score work hand-in-hand to create an entire world. Composer Russo manages to pay homage to the iconic Carter Burwell score from the original film while also becoming completely its own commentary on the violence and lonesomeness of the wintry scenes and epic scope of the frozen fields and woods of Minnesota. It is deeply melancholy, moving and ominous, all at once. Phillips says she and Russo work closely to make sure the sound of the show is consistent, so much that at one point the score is actually folded into one of the musical selections. At the end of Episode 5, Russo and Phillips joined forces so the score transforms into the opening strains of “Children of the Sun,” which Hawley has always seen as one of the major framework songs for the show.

Covers of songs featured in Coen brothers' movies have been peppered throughout the season and some of them were specially recorded for the series. So far these include Jeff Tweedy covering Jose Feliciano on “Let’s Find Each Other Tonight” (which Feliciano performed in the film “Fargo”), Blitzen Trapper doing a '70s rock-inspired version of “Man of Constant Sorrow” (made famous by “O Brother”), and Hawley and Russo collaborating on a cover of “Didn’t Leave Nobody But the Baby” (also featured in “O Brother”). Although not recorded for the show, Bon Iver and the Chieftains’ cover of “Down in the Willow Garden” was featured in Episode 4 and is a nod to “Raising Arizona” while also perfectly matching the tone of the show. And there’s more to come.

“Episode 7 has some big ones, three of them,” Phillips promises. “Episode 9 ends with my favorite cover of the season.” She says that doing the covers not only allowed them to pay homage to the tremendous musical heritage of the Coen brothers’ films but to also bring in current artists for a show set in 1979. “And, a few of them happen to be from Austin,” Phillips says. “I’m from Austin and Noah lives there now. I love any time I can get an Austin band in any project. That’s where I learned to love music.”

Phillips’ love for music — and her close work with Hawley and Russo -- has transformed the show and taken already exquisite work to new heights. “I’m all emotion,” she says. “I get so attached to all the characters, so when a song hits me in the gut and makes me pause and sit with that character a little more, I know it’s right.”

Besides covers to look forward to, there are also what Phillips calls “big songs” from the era that promise to continue the trend of “Fargo” being the best music show on television. “In the last few episodes we use two huge songs from the time, the most recognizable songs used in the season, and both are used in very dramatic ways. A song in the last episode, the song that blew our budget, that song (that I can’t mention) makes me so very happy,” Phillips says. “I think I told Noah I could die happy now that I’ve used that song. And used that song in the best way it could ever be used.”

Music supervisor Phillips and star Wilson may work on opposite sides of the camera, but they also know that sometimes the soundtrack is hemmed in by budgetary concerns. That’s certainly true of a television show. But Wilson believes that the wonderful use of music throughout this season proves that originality and true style can’t be bought. “It’s less about rights and money and more about taste and desire to set a new tone,” Wilson says, “which they seem to do every week.”