Ted Cruz's laughable plan to rebrand himself as a moderate 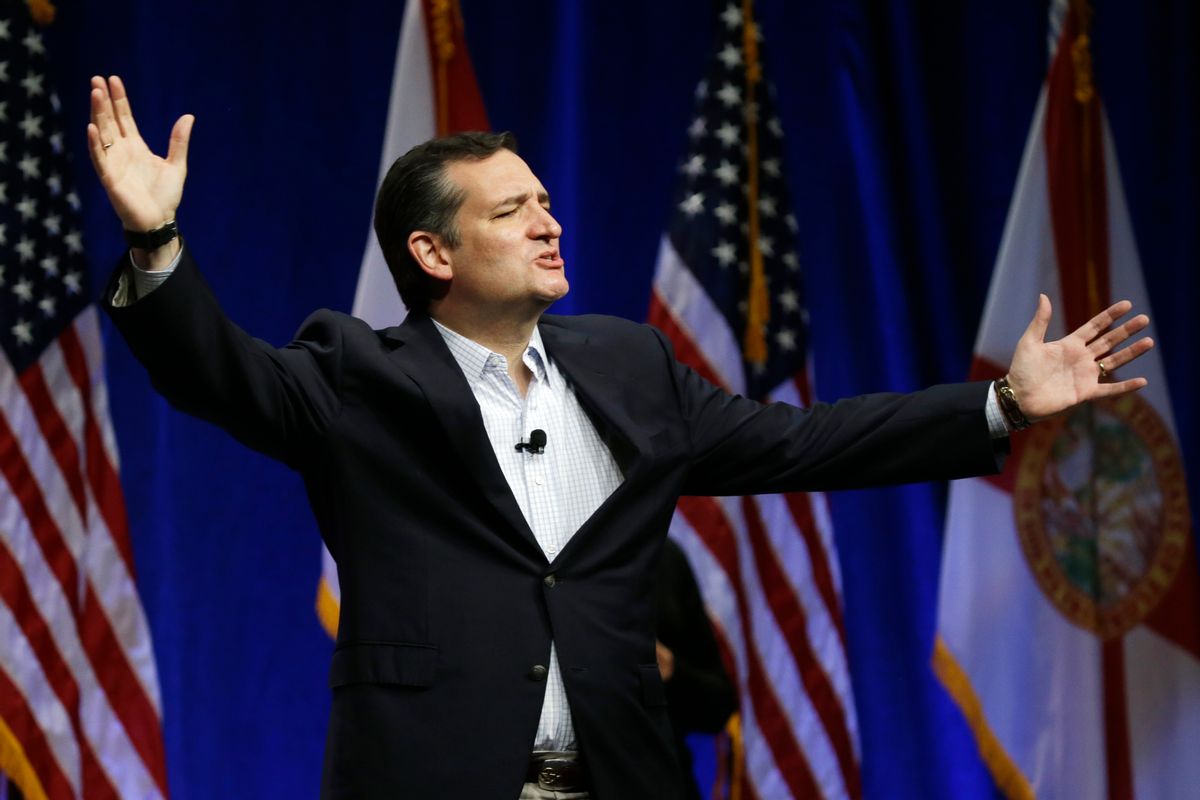 When you think of Republican moderates, very few – if any – come to mind. There just isn’t a lot of space for pragmatic, policy-minded conservatives in today’s GOP. There’s good news, however, and his name is Ted Cruz.

Turns out Ted Cruz is really a moderate, and he’s deeply concerned about the rhetorical excesses of his fellow Republican candidates, particularly after the terrorist attacks in Paris. Indeed, a new AP report suggests that Cruz is attempting to rebrand himself in the wake of the latest attacks. His hope is to appeal to the supporters of people like Trump and Carson by emphasizing his experience and, I’m not joking, his moderation.

“Tone matters,” Cruz told the AP in a recent interview. “Are there some in the Republican Party whose rhetoric is unhelpful with regard to immigration? Yes.” When pressed about his affiliation with Steve King (the Iowa congressman who endorsed Cruz last week), who has described immigrants as disease-ridden and even “compared them to drug mules and livestock,” Cruz glibly replied: “I cannot help the language that others use. I can only help the words that come out of my mouth.”

You almost have to applaud Cruz’s chutzpah here. This guy has made a career of extremism. His strategy in the Senate, from the very beginning, has been to obstruct and to use his platform to appeal to the wingnut base of the Republican Party – showing little to no interest in advancing a credible legislative agenda. And he’s mouthed as many inflammatory idiocies as anyone currently running for president.

Politico was kind enough to compile some of Cruz’s rhetorical highlights in March. A similar list was assembled at Raw Story. Here are just a few examples:

Keep in mind that all of these statements were uttered before Cruz launched his presidential campaign. He hasn’t toned down the rhetoric one bit since becoming a candidate. Quite the opposite, actually. He consistently refers to his colleagues on the Hill as the “Washington Cartel.” He boasts about his climate change denialism. He suggested on the Senate floor that Speaker Boehner cut a secret deal with Leader Nancy Pelosi in order to “surrender and join with the Democrats.” He constantly pushes proposals he knows even Republicans won’t support, like threatening to shut down the government over Planned Parenthood funding. He said “religious liberty is under threat as never before in this country,” and that he would “not surrender” on issues like same-sex marriage, no matter what the law or the general will or the Supreme Court says.

Ostensibly, Cruz’s latest gambit is in response to Donald Trump’s call for a Muslim database after the Paris attacks, which is surely a non-starter outside the conservative echo chamber. But Cruz’s response to Paris is scarcely better – or less extreme. He has suggested that we impose a religious test on Syrian refugees, allowing only Christians into the country. He even introduced legislation, which he knows will never pass, making this religious test official policy.

That Cruz wants to suddenly shapeshift into an electable centrist is laughable on its face. He has carefully positioned himself to absorb the supporters of Trump and Carson, and that means he’s had to appeal to ideological hard-liners. There’s very little difference between Cruz and Trump and Carson, in other words.  If anything, Cruz is simply a more polished rhetorician, and so he’s able to take similar positions as Trump without sounding as brash or unhinged. Substantively, though, he’s as extreme as anyone.

This strategy might work in the short-term, especially now that Carson appears to be fading. But it won’t work in a general election. Cruz isn’t remotely electable, and his unfavorable ratings would be sky high against virtually any Democratic candidate. Thus, like everything else Cruz does, this tactic may work for him but it will be positively disastrous for the Republican Party.