Faith after Ferguson: It's been 1 year since Michael Brown's killer wasn't indicted, and I learned what I really believed in 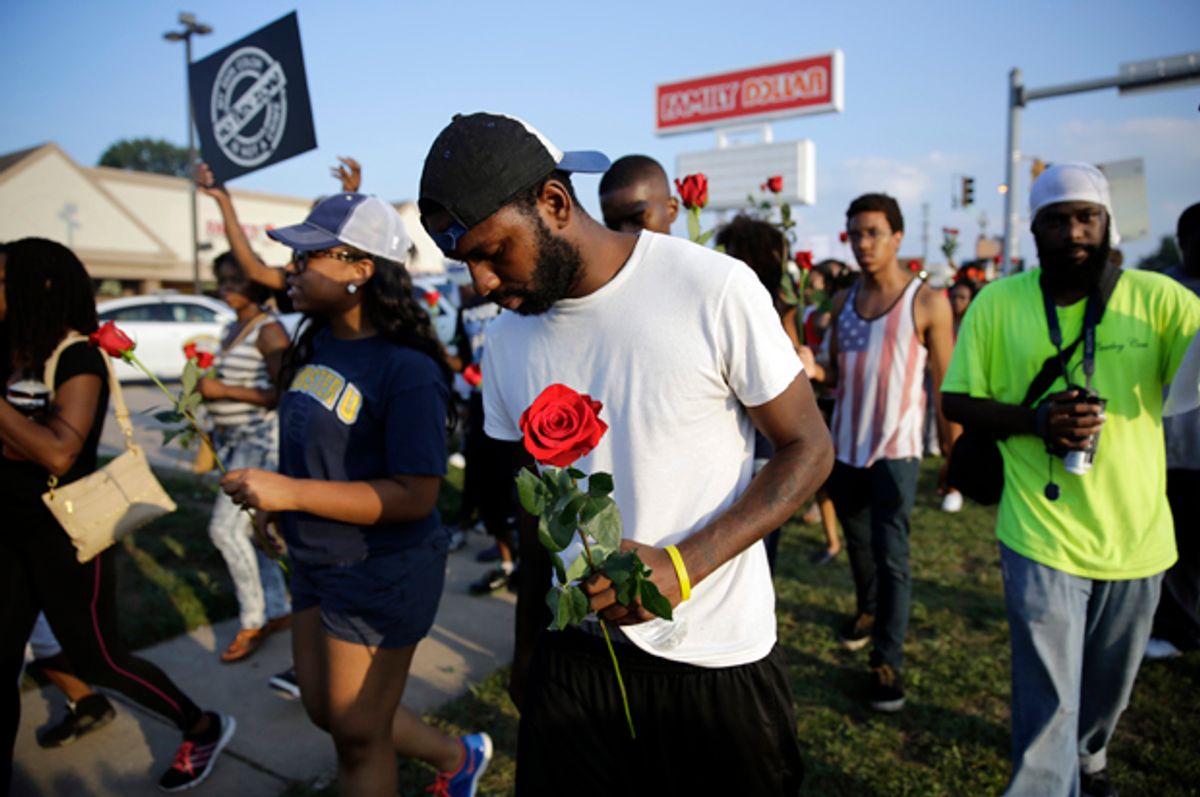 I don't want to romanticize that night. I understand its wide-reaching political ramifications, its contemporary significance, how our nation's entire social landscape shifted irreversibly, so much energy and tension balancing on a single city at the heart of the country. I get it. That night represented the beginning of something for thousands of people. Standing in the middle of S. Florissant across from the Ferguson Police Department and amid a mass of anxious citizens, we huddled in clusters next to any device capable of livestreaming the announcement of whether police officer Darren Wilson would be indicted for killing Michael Brown. I was standing between a friend's phone and someone's open car window with the radio on. Mike Brown's mom was standing a few feet away, waiting. Someone's arms were around her shoulders. We listened. No one moved.

And then suddenly, everything did.

What followed was a long, scattered, frantic night in multiple locations. I won't compare it to a battlefield because I've never been in or witnessed one. I think the metaphor, although helpful for some, makes lazy work of the particular kind of American domestic state violence we experienced that night and on countless others. There's a strange desire to reimagine it all as some dramatic, "Hunger Games"-revolution epic, complete with Hans Zimmer musical score. But here again, lazy work; imagining a revolution, even arguing for its necessity, does not mean you understand its realities, what it calls for, or what it requires of each of us. And that, of course, is often the pitfall of recollection. After all, to quote Barbara Kingsolver, "Memory is a complicated thing; a relative to truth, but not its twin." What so many of us experienced that night was not some righteous race war or Hollywood epic. Nor was it a reason to play out some anti-establishment anarchist fantasies. A year later, I still have trouble naming it anything poetic or describing it without just retelling the specifics of what I can remember. Aside from the screaming and running and chanting despite the smoke and police, my reflection a year later offers me, right now, only this: a question of faith.

Believing that something can get better means that you still believe in it. It's as true for bedridden loved ones as it is for our justice system. There's a difference between believing the system is broken, and believing the system itself is a mechanism of injustice. There's a difference between wanting a nation to recognize and repair its faults, and understanding that the state functions as the very vehicle through which oppression is carried out and daily enforced. Now, within the faux-vacuum of the academy, I understood the latter to be true. But outside of that theoretical space, as I suspect is true for many (despite our Twitter timelines), it's a bit of a stretch to wrap our minds around. To traverse the space in between those ideas means repositioning many of the intuitions we all participate in. It means implicating ourselves, and that can be a risky thing to engage in--a leap of faith, if you will. Last year, on non-indictment night, I leaped.

It was both the stream of evidence accumulated over the weeks of protest, and that singular night of excess that pushed me to jump. It was the books I had read and the expensive classroom discussions I was privileged to participate in and have access to. It was the people I had met and protested with and talked to between meetings. It was the culmination of a lot of things. I leaped. I lost faith in the American justice system, that it ever had the intention to operate with any amount of equity, or that it even had the capacity to rectify its past harm. I lost faith in America capitalism, that it would ever be capable of anything other than inherent exploitation, that it could sustain itself without dealing in poverty. I lost faith in the idea that the visible negative effects of a white supremacist capitalist patriarchal neocolonialist system were the exception. I couldn't convince myself that it was broken if I was watching it work in real time right in front me. From the mainstream media narrative and the political (re)positioning and displays of so many politicians, to the maddeningly predictable court process and the militarization of the police night after night after night after night--it was all working. I realized that I was watching the web of systems at work, and that it was really, actually, practically, in reality, built to work this exact way.

Losing so much faith in one night could indeed melt any person down into an utterly disenchanted nihilistic cynic — or it could mean you have room to strengthen your faith in something else. The night of the non-indictment, I was given the opportunity to do just that. Seeing strangers help each other get to safety, to pull a stranger away from an advancing police line or to kneel next to a fallen protester and help them to their feet through burning, squinting eyes wasn't a new sight, but on the night of the non-indictment everything seemed more pronounced, including our compassion for each other. It matters that we maintained our ability to fight for the collective, even in moments of extreme crisis. Remembering the medics, fully prepared and focused on our safety on that night and on so many, many others, reminded me that in the midst of state terror and the multiple kinds of violence we're all learning and unlearning, we can and will fight to keep each other safe. Seeing MoKaBe's transform itself into a safe haven from the weaponry just outside its storefront reminded me that spaces of refuge do, in fact, exist. Seeing the coffeeshop get teargassed seconds later told me that those spaces can and likely will take a beating--and can and will remain standing afterward. I watched a girl teach a hyperventilating, freshly teargassed protester a quick breathing exercise to calm him. The care with which she, freshly teargassed herself, walked him through the steps was effective; he caught his breath soon after and the two parted ways. It seems small then, but it feels demonstrative, especially now.