UPDATED: A promotion for TV show "The Man In the High Castle" comes at a high emotional price for commuters 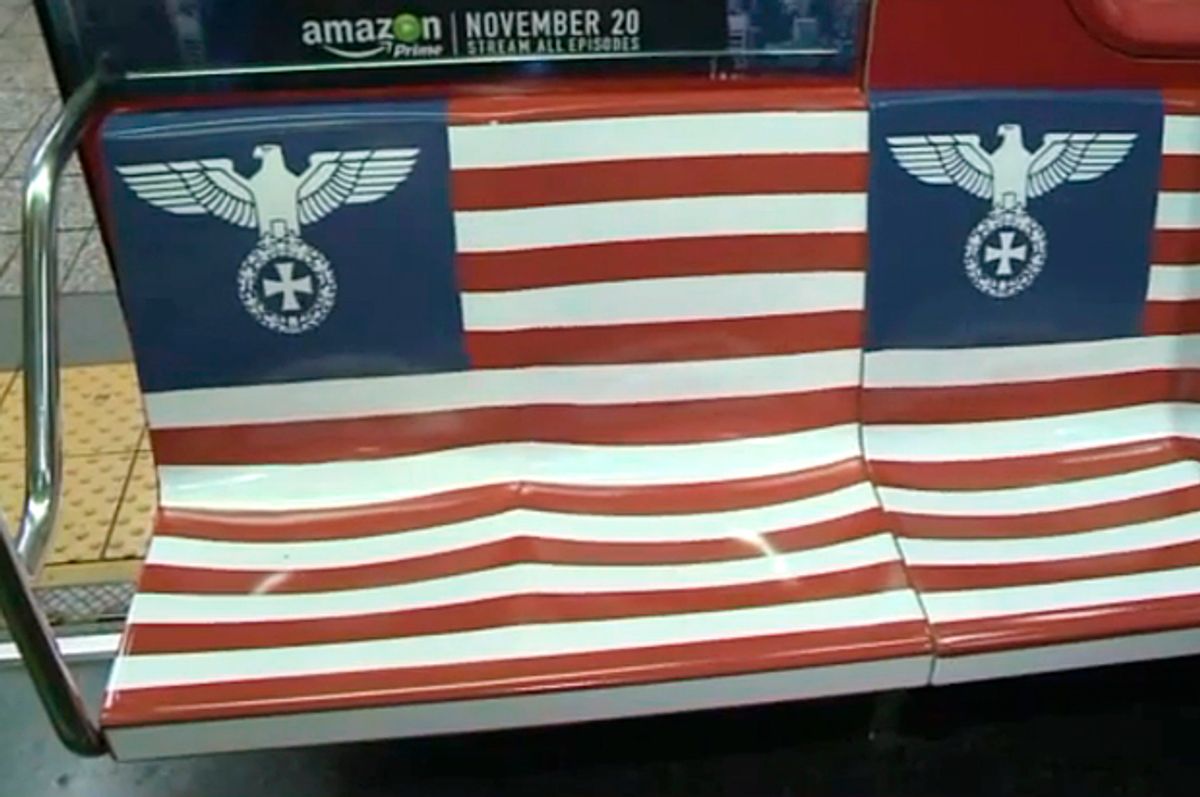 Just a mere month ago, the MTA was the center of a controversy over its rejection of a campaign created by Outfront Media for clothing brand Thinx. Thinx defines its mission as "reimagining feminine hygiene products to provide support, comfort, confidence, and peace of mind. We aim to eliminate shame, empowering women and girls around the world." Outfront claimed the MTA initially told them the ads, featuring women in modest undergarments and the straightforward message that the products are "for women with periods," were "inappropriate” and “suggestive.”

This sudden attack of primness from the MTA was viewed as rather questionable, especially by New Yorkers who've seen ads featuring "beach body ready" bikini girls, sexy beast augmentation ads, and entire subway cars plastered with lingerie-clad models. A week later, the MTA approved the ads, even though MTA boss Thomas Prendergast admitted "On a personal level, I just found parts of those ads offensive, other parts not offensive." MTA Transportation Commissioner Polly Trottenberg, meanwhile, grumpily added, "There’s a level at which people want to have ads that aren’t going to offend their sensibilities. Getting that line right is proving to be something we’re grappling with."

Yet when the MTA subsequently "grappled" with the campaign for Amazon's new series, "The Man In the High Castle," it ultimately decided that swaddling the interior of an 42nd Street shuttle train with the regalia of the Nazis and Imperial Japan was a hot idea. The series, a reimagining of modern history if the Axis powers had won World War II, features symbols and slogans that combine American patriotism and Nazi propaganda. On the shuttle train ads, an American flag has been revamped to bear a Reichsadler eagle, and an Imperial Japanese sun has been tweaked to a red, white and blue design. The campaign was created, by the way, by the minds behind the Thinx ads, Outfront.

As commuter Ann Toback told Gothamist's Erik Baard Monday, "Half the seats in my car had Nazi insignias inside an American flag, while the other half had the Japanese flag in a style like the World War II design. So I had a choice, and I chose to sit on the Nazi insignia because I really didn’t want to stare at it…. I definitely didn’t feel welcome this morning." Anti-Defamation League New York regional director Evan Bernstein added, "On the train, seeing the American flag paired with a Nazi symbol is viscerally offensive, because there is no context as to what it means. The fact that the flag is spread across the seats only compounds the effect. This ad campaign has a feel of exploiting things that are so sensitive to so many people." And do the MTA and Outfront really need to be reminded that trains already have enough Nazi associations without using them to promote an Amazon show? Gothamist also notes, "Many New Yorkers and their families are from Asian nations once brutally occupied by the Japanese Empire. For them the seats opposite the Nazi insignias might be just as jarring."

The response on social media has been equally unenthused, with Buzzfeed writer Miriam Elder asking, "What Jew ~hasn't~ wanted to commute to work in a Nazi train car?" and Ron Hogan noting, "Apparently, as long as it's for 'entertainment,' & not 'political,' you can cover a NYC subway car in Nazi insignia."

With a few notable exceptions, we're reasonably on the ball here in the Big Apple. We know who won the war. We get that this is fiction — and the stunt certainly has raised awareness of the show. But it's one thing to voluntarily watch a show and it's another to apparently be fine with making travelers — some of whom are survivors of war atrocities and some of whom are descendants of victims of them — sit on a train full of enemy insignia and call it entertainment. And it suggests the MTA really has no idea what "offensive" really means.