This is not how you beat Donald Trump: GOPers organize yet another effort to sabotage their billionaire frontrunner

A new GOP coalition is trying to stop Donald Trump, and so far their best effort is "Trump says crazy things!" 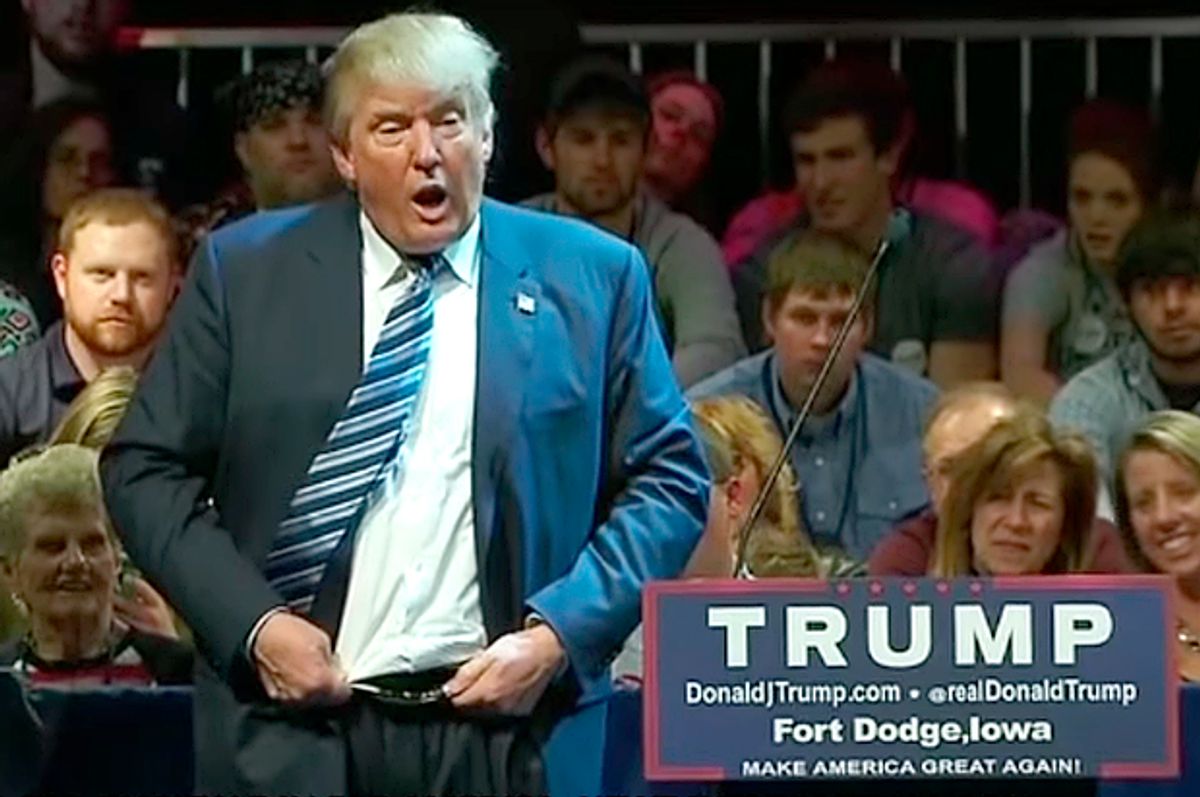 For what feels like the fifth or sixth time this election cycle, Republicans are organizing themselves to try and take down Donald Trump. Rick Perry tried it, Jeb Bush tried it, Rand Paul tried it, and they all retreated battered and diminished. A few months ago there were rumblings that the remnants of Mitt Romney’s 2012 campaign apparatus were going to reunite and launch an effort focused on dragging Trump out of the frontrunner’s spot, but nothing seemed to come of that, and Trump hasn’t faded in the meantime. Now the latest anti-Trump uprising has come along, with a host of Republican-aligned super PACs and outside groups moving at the same time to finally, perhaps, mount a successful assault on the racist billionaire who’s captured their party’s loyalty.

Per the Wall Street Journal, the new anti-Trump offensive is being spearheaded by a group formed by Republican activist Liz Mair, with some assistance from the Club for Growth and a super PAC supporting long-shot Republican presidential candidate John Kasich. “The sense of urgency has mounted in part because Mr. Trump continues at or near the top of GOP polls,” the Journal notes, “even after many predicted that the Paris terror attacks would lead voters to turn to a more seasoned candidate.”

It’s tough to know how serious all this is, given the past anti-Trump coalitions that have fizzled and the fact that all of this secret planning is being spilled to the Wall Street Journal. But the pro-Kasich group, New Day for America, has released its first anti-Trump ad… and it is terrible.

The ad is a compilation of some of the crazier things Trump has said during this campaign and in years past, with all of it set to “The Blue Danube,” for whatever reason.

I guess the thinking behind this ad is that if you take all the terrible things Trump has said that didn’t arrest his momentum and cram them all together in one ad, by some strange greater-than-the-sum-of-their-parts alchemy they’ll transform into a potent indictment of the Trump candidacy.

This is not how you beat Trump. To be completely honest, I’m not really sure how you beat Trump given that he’s seemingly incapable of sabotaging his own campaign and he’s stubbornly survived every effort at demonstrating what an enormous shitheel he is. But watching him react to the latest round of “Trump said a crazy and unjustifiable thing” at least clarifies what his appeal is and should instruct the terrified Republican establishment on how to deal with him.

The panic over refugees from Syria has fed nicely into Trump’s brand of xenophobic, crypto-fascist politicking, and this weekend he went on ABC News and defended his claim that “thousands and thousands” of Muslims in New Jersey cheered on 9/11 when the World Trade Center came crashing down. “It was on television,” Trump insisted. “I saw it.” The fact checks came hard and fast, with the Washington Post giving Trump the maximum number of Pinocchios and pointing out that there is zero evidence this happened.

With assistance from the dimmest, most ancient stars of the conservative blogosphere, Trump pushed back, highlighting a 2001 Washington Post article that reported “authorities detained and questioned a number of people who were allegedly seen celebrating the attacks and holding tailgate-style parties on rooftops while they watched the devastation on the other side of the river.” Trump demanded an apology from the Post based on that article.

It doesn’t matter that the newspaper article doesn’t back up Trump’s claim that he saw this happen on TV. It doesn’t matter that the article mentioned “a number of people,” and not the “thousands and thousands” Trump referenced. It doesn’t matter that one of the reporters who wrote the article says flat-out that it does not support what Trump alleges. This tendentious, goalpost-shifting, factually inaccurate “debunking” of the fact-check will more than qualify as “truth” to people who are motivated enough to believe it. And it let Trump put himself in the position he likes to inhabit: that of the unfairly maligned victim pushing back against his persecutors.

Trump does this stuff because it makes him look “strong” in the eyes of his supporters, and if Republicans are going to knock him down, they have to find some way to make him look weak. A crappy “best of” reel of Trump being Trump that questions his electability doesn’t do that – Jeb Bush already went down that route and it accomplished nothing. The problem for the GOP is that Trump feeds off of the establishment's disdain and is surging on anti-immigrant sentiment and the gross exploitation of fears about Muslims in America. So if the Republican establishment goes after him for being too much of a bigot or a xenophobe, they’re arguably doing him a favor.