12 best dinner table scenes on film: From the Griswolds to the Deetzes, here are Hollywood's most memorable meals

When you gather around the table today, remember these iconic scenes 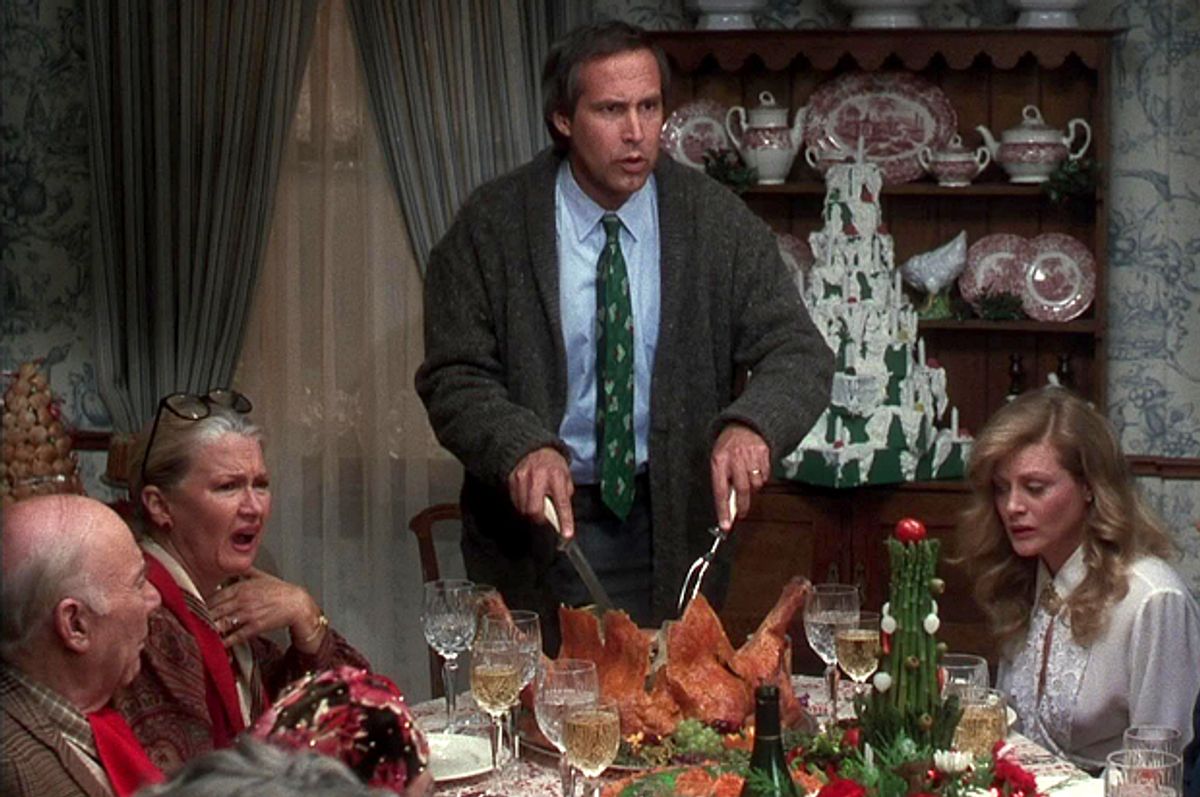 When my family gets together for Thanksgiving, my twin and I always race to quote our favorite line from “Night Shift”: “Turkey’s almost dead!” It’s as much a ritual as carving the bird. As families gather around the table this holiday season, films that depict dinner scenes always come to mind. Sure there are some great dysfunctional family Thanksgiving comedies, from “Pieces of April” to “Home for the Holidays,” but even non-holiday-meal films are invoked. Consider in the awkward social comedy “Guess Who’s Coming to Dinner” or the broader farce, “Meet the Parents,” about meeting one’s partner’s parents for the first time.

Many films use dinner table scenes to inform audiences of the relationships between characters—note how the table in “Citizen Kane” gets longer as the couple gets more estranged, or how truly unsettling the meal is in “The Texas Chainsaw Massacre.”

Oh, and another word of advice from my twin and me and a classic comedy: Don’t be late to dinner or we’ll quote Nurse Diesel (Cloris Leachman) from “High Anxiety,” who insists, “Those who are tardy do not get fruit cup!”

Sam Mendes’ film may not deserve the Oscar it won for Best Picture, but it does feature a fantastic dinner table scene. Lester Burnham (Kevin Spacey in an Oscar-winning performance) announces to his daughter Jane (Thora Birch) that he quit his job. His wife Carolyn (Annette Bening) gets riled up by this news, and the burden of having to be the family’s sole breadwinner. But her rage is nothing compared to Lester’s delicious outburst when he simply wants someone to please pass him the fucking asparagus. And don’t interrupt Lester, either.

Alvy Singer (Woody Allen) visits his titular girlfriend’s family for Easter dinner in this classic Best Picture-winning comedy. From the "dynamite ham" served to Grammy Hall, looking at Alvy as if he were a Hasidim, Alvy is in disbelief. He even stops the meal to directly address the audience and illustrate the differences between the Singer family and the Halls. It’s a hilarious split screen comparison: her family’s table talk concerns swap meets; his parents boisterously discuss diabetes. “Annie Hall” is the ne plus ultra of gefilte-fish-out-of-water dinners.

Barry Levinson’s knowing drama about a Polish-Jewish family in Baltimore features a fantastic Thanksgiving dinner scene. At one point, a young boy being served his meal complains about the food touching on the plate. It is a scene out of every household during the holidays. But the real drama begins when Gabriel Krichinsky (Lou Jacobi) arrives late to dinner and storms out screaming, “You cut the turkey without me!” While others acknowledge Gabriel does this routine every year, the scene shows just how high-strung families can get. Levinson actually goes this scene one better later in “Avalon,” as when a camera pan shows the family eating in front of the TV rather than congregating in the living room, a sign of how detached families have becomes over the years.

The exquisite feast served in this exquisite Danish film (which won an Oscar for Best Foreign Language Film) consists of turtle soup, stuffed quail in puff pastry (“cailles en sarcophage”), and other delicacies. The food is washed down with Clos de Vougeot 1845 and Vueve Cliquot 1860. Babette (Stéphane Audran) spends 10,000 francs she won in a lottery on “a real French dinner,” recreating a meal fro 12 from the Cafí Anglais. But the irony is that her cooking is only truly appreciated by one guest, General Löwenhielm (Jarle Kulle). While the meal does have a transformative effect on all of the diners, it also shows the sacrifice Babette makes to please the Danish sisters who took her in, and ultimately, Babette’s joy in serving such a unique and fabulous meal.

If you are going to have a dinner party, you'd better makes sure there are no ghosts in the house making mischief. When host Delia Deetz (Catherine O’Hara) unexpectedly interrupts her meal to break out into a spirited version of “The Banana Boat Song,” everyone eventually joins in. One guest even uses the ice bucket as a bongo. While their singing at the table may be what causes the food in “Beetlejuice” to act out and attack the dinner guests, if there are ghosts in the house, rebellious food is likely the lesser problem.

While most family celebrations are happy occasions, this lacerating Danish film, shot in the Dogme style, about Helge’s (Henning Moritzen) 60th birthday party, shows just how unhappy families can be. Eldest son Christian (Ulrich Thomsen) delivers a doozy of a toast, full of “home truths,” that shocks everyone. Sure, the anecdote about how he and his late sister Linda would put things in people’s food without their noticing is amusing, but the bit about dad taking baths and then taking Linda and Christain into his study to sexually abuse and rape them might just put folks off their meal.

“The Cook, The Thief, His Wife, and Her Lover”

Peter Greenaway delivers the ultimate “theme” restaurant as the characters’ clothes in this visually opulent film change to match the color of the room they are in. (Red in the dining room, white in the bathroom, etc.) The story of adultery, murder, gluttony and revenge concerns a nasty gangster, Albert Spica (Michael Gambon), his cheating wife Georgina (Helen Mirren), her unfortunate lover Michael (Alan Howard), and the cook, Richard (Richard Bohringer) who prepares their meal(s). The film famously ends with—and perhaps earned its NC-17 rating for—a scene in which Richard serves Albert Michael’s dead body, and Georgina encourages him to eat the corpse’s cooked cock. Getting his just desserts, Albert is called a cannibal.

Ang Lee’s mouth-watering opening scene of a meal being prepared sets the appropriate tone for this poignant film about Master Chef Chu (Sihung Lung) and his three grown daughters. The family gathers around the table for dinner every Sunday. Whenever they get together, however, someone always seems to have an announcement that causes everyone else to go into a tailspin. In one of the film’s most ironic scenes, Chu, whose taste buds are failing, prepares a gorgeous meal that everyone refuses to eat.

The chicken dinner in David Lynch’s deadpan debut is truly memorable. There is a strange conversation about a numb arm, and the chicken’s animated response to being cut up is that cooked birds fidget and bleed. The bizarre behavior by one of the other guests at the table prompts the comment, “She’ll be alright in a minute.” But will she, really? Lynch prepares a real surreal meal.

Proving the magic properties of food, this romantic Mexican film uses magical realism and a dish of quail with rose petals to cause Pedro (Marco Leonardi) and Tita (Lumi Cavazos) to fall passionately in love. The alchemical phenomenon of Tita’s blood that permeates the sauce “invades” Pedro’s body in a sensual way. “The nectar of the gods!” Pedro exclaims at dinner, feeling passionate. However, Tita’s disapproving mother (Regina Torné) thinks the dish is much too salty.

It’s a sure thing that things will go badly for the Griswolds, but the film’s Christmas dinner table scene is pretty funny. Not only does Aunt Bethany (Mae Questel) have an interesting interpretation of saying grace, but the turkey is so dry it deflates. (The extended family politely chokes it down anyway.) There are other awkward moments involving Uncle Eddie (Randy Quaid) or the family pets, which are either really amusing or really disgusting, depending on one’s taste.

This adaptation of Henry Fielding’s picaresque novel features one of the most famous eating scenes in all of movie history. When Tom (Albert Finney) and Mrs. Waters (Joyce Redman) share a meal, they practically seduce each other at the table. Director Tony Richardson conveys all the erotic properties of food as Finney looks lustily at both his meal and his dining companion while they ravish a chicken leg and each other. “Tom Jones” proves that slurping an oyster is ideal foreplay. The characters don’t say a word to one another, but their body language and their hungry tongues express it all.