In his speech last week, Sanders said what every presidential candidate ought to say about ISIS and the Middle East 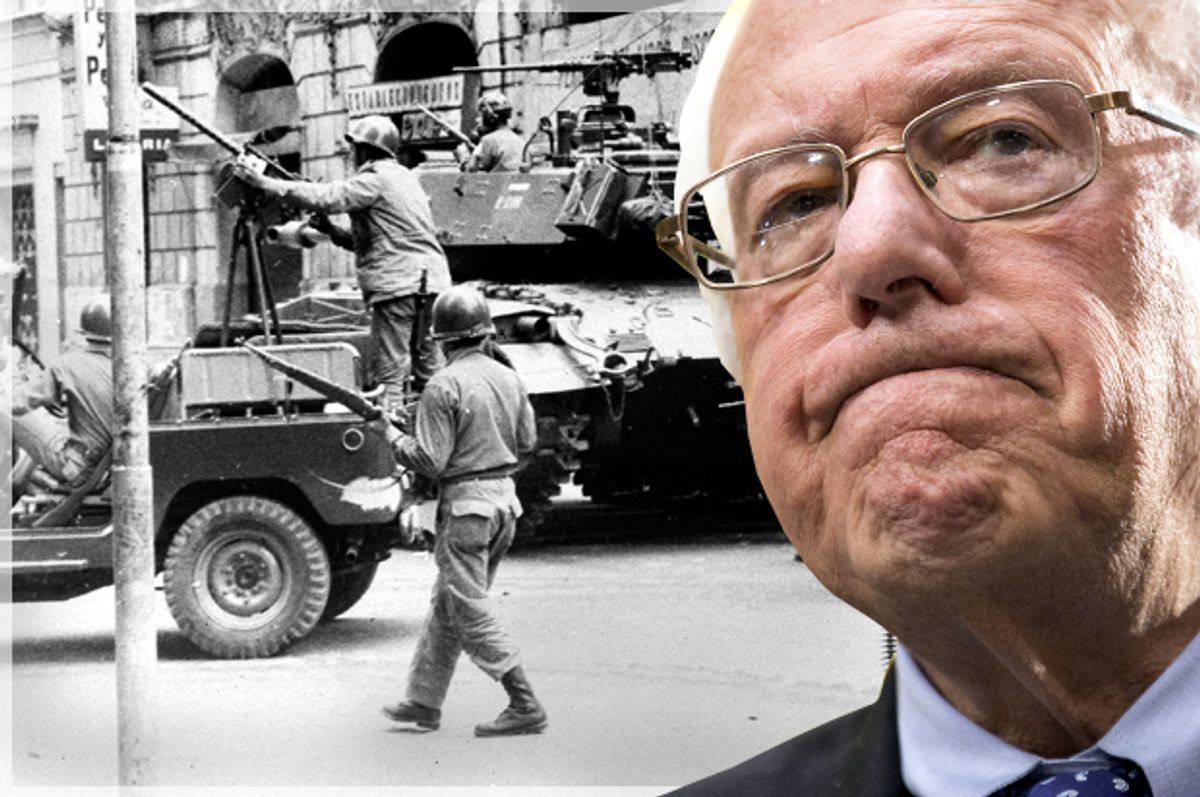 Bernie Sanders’s economic populism and domestic agenda receive a lot attention, and they should - he’s a unique and important voice on these fronts. But Bernie’s refreshing sanity on foreign policy gets overlooked far too often. This is especially problematic given the most recent Paris attacks and the renewed emphasis on national security.

Sanders gave a major speech last week at Georgetown University, the central theme of which was democratic socialism. Understandably, much of the coverage focused on Sanders’s efforts to situate his brand of socialism in the broader American tradition. However, Sanders also used his speech to talk about our foreign policy dilemma in the Middle East.

His remarks were what we’ve come to expect from Sanders: honest.

Because he doesn’t spin the way other politicians do, Sanders brings a kind of clarity to this conversation, a clarity that’s desperately needed in our current climate. Conservatives will likely dismiss Sanders as a dovish liberal who doesn’t understand foreign policy, but that’s because they don’t want to hear what he has to say.

In the speech, Sanders makes clear that he both understands the crisis and the complicated political realities on the ground. “The United States must pursue policies to destroy the brutal and barbaric ISIS regime,” Sanders said, and we must “create conditions that prevent fanatical extremist ideologies from flourishing. But we cannot – and should not – do it alone.” [Emphasis mine].

The part about not doing it alone is critical. To begin with, unlike most candidates, Sanders concedes that we’ve being going it alone for decades now, with disastrous results.

“Our response must begin with an understanding of past mistakes and missteps in our previous approaches to foreign policy. It begins with the acknowledgement that unilateral military action should be a last resort…and that ill-conceived military decisions, such as the invasion of Iraq, can wreak far-reaching devastation and destabilize entire regions for decades. It begins with the reflection that the failed policy decisions of the past – rushing to war, regime change in Iraq, or toppling Mossadegh in Iran in 1953, or Guatemalan President Arbenz in 1954, Brazilian President Goulart in 1964, Chilean President Allende in 1973. These are the sort of policies that do not work, do not make us safer, and must not be repeated.”

It’s astonishing how many candidates on the Right in particular simply refuse to acknowledge that our previous encroachments around the world have done more harm than good (For example, our invasion of Iraq created the vacuum into which ISIS inserted itself).

Reminding Americans of our history is necessary, however. It’s a good way to avoid repeating mistakes. This has to be part of the conversation about ISIS. Everyone agrees that ISIS is a threat, and that something has to be done about it. But this isn’t a problem that American can or should solve on its own.

“But let’s be very clear. While the U.S. and other western nations have the strength of our militaries and political systems, the fight against ISIS is a struggle for the soul of Islam, and countering violent extremism and destroying ISIS must be done primarily by Muslim nations – with the strong support of their global partners…What does this mean? Well, it means that, in many cases, we must ask more from those in the region. While Jordan, Turkey, Egypt, and Lebanon have accepted their responsibilities for taking in Syrian refugees, other countries in the region have nothing or very little.”

We’ve wasted too much money and spilled too much blood fighting a war on terror that clearly isn’t working. We’re in a war, and we have to fight it, but we can’t win it alone. “Muslims must lead the fight,” Sanders declared, because “it is incumbent on Muslim nations and communities to confront those who seek to hijack their societies and generations with intolerance and violent ideology.”

Countries in the region have arguably a much bigger stake in this fight than we do. As Sanders points out, Saudi Arabia (our chief ally in the region and a prolific fount of extremist ideology), Kuwait, Qatar, UAE and others are “countries of enormous wealth and resources” who “have contributed far too little in the fight against ISIS. That must change.”

For too long these countries have sat idle while America has done the heavy lifting – this isn’t sustainable and it’s not working in any case. And yet Republicans insist that America has to play a larger role, that we have to shoulder more of the burden, and that we have to fight the tactic of terrorism without addressing its ideological fountainhead.

Indeed, the majority of Republicans – not all, to be fair, but most – refuse to see the connection between the Iraq War and the present destabilization of the region, without which ISIS would not exist. Donald Trump and Jeb Bush, for instance, are calling for more troops on the ground without any discernible plan to deal with the more fundamental causes of terrorism. Worse still, they want America to “lead the way” which means allowing the countries closest to and most invested in this fight to allow us to counterproductively wage it on their behalf.

We’ve tried this strategy. It failed. It’s time to let the region police itself. That doesn’t mean America doesn’t have a role to play – surely we do. But unless we accept that this isn’t merely an American fight, we’ll continue to create more problems than we solve.