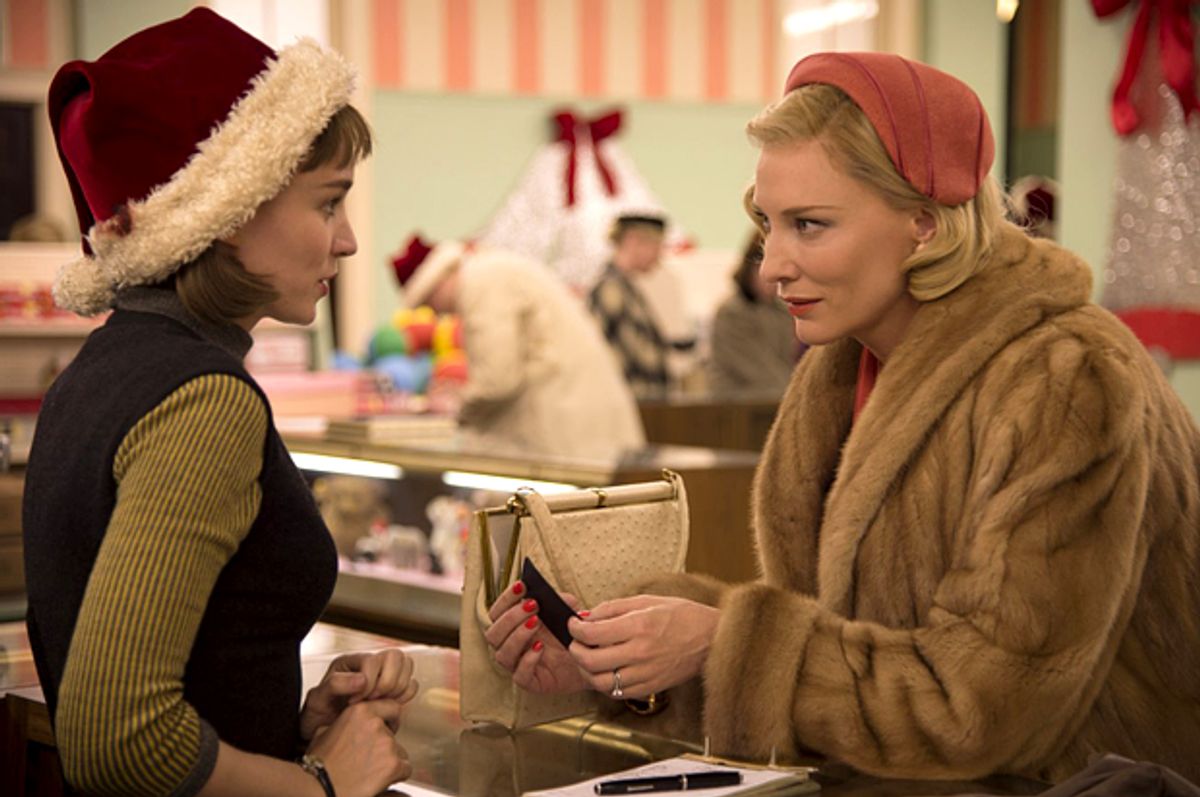 From its opening shots of the autumnal, rain-swept streets of New York sometime in the middle of the last century, director Todd Haynes’ magnificent new film “Carol” establishes a mood of mournful romance, half nostalgic and half ominous, that never lets go. We move out of the streets and into an upscale hotel bar, following a young man who turns out to be such an insignificant character we never learn his name. We observe the scene partly from his point of view as he orders a drink, buys one from the bartender and then sees a girl he knows across the room. If he has a tiny flicker of intuition or understanding about the nature of the liaison between his friend, Therese Belivet (Rooney Mara), and her cocktail companion, Mrs. Carol Aird (Cate Blanchett), it never gets all the way to his conscious mind.

We know what that guy doesn’t, of course, since everyone who sees “Carol” will understand that it’s a story about a lesbian love affair in an era when such things were shameful and scandalous. But Haynes and screenwriter Phyllis Nagy (adapting Patricia Highsmith’s novel “The Price of Salt”) are fully in control, manipulating what we know and think we know and what we notice, including the way Carol leaves her hand on Therese’s shoulder a half-second too long when she says goodbye. When we see the same scene again, later in the film (in a completely different sequence of shots), we will understand that we were nearly as much in the dark as Mr. Clueless Cheerful. We were congratulating ourselves for our attitude of tolerance and our clear perception, but in fact we had no idea what was going on in that meeting between Carol and Therese, or what had precipitated it or how it would change the rest of their lives.

“Carol” is such a moving film and such a beautiful film, which demonstrates in a thousand ways why cinema (however moribund or irrelevant it may appear) is not television, that I am reluctant to privilege any particular element of its construction. Maybe I can start by saying that this the masterpiece Todd Haynes has been working toward, after a series of admirably crafted films that have all felt a touch too mannered or detached. But that’s not nearly enough, given Haynes’ reputation as an ultra-indie auteur or special-interest LGBT artist. So let’s try this: “Carol” is one of the greatest American screen romances of any era, period – and perhaps that serves as the ultimate vindication of Haynes’ outspoken commitment to “queer cinema.”

Of course it’s not irrelevant that the protagonists in this love affair are two women, and of course there are political and social issues at stake here. But “Carol” does not work by engaging your tolerance or your compassion or your political sympathies. It works by seducing you and enrapturing you and enraging you and sweeping you away, as do “Romeo and Juliet” or “Casablanca” or “Before Sunrise.” (Despite its period setting, “Carol” is not overloaded with film-school references, but there were moments when I could feel the undertow of “Roman Holiday” and David Lean’s “Brief Encounter” and Martin Scorsese’s underappreciated “The Age of Innocence.”) If you feel the need to discuss this movie in terms of its representational politics, or its depiction of both social and internalized homophobia – well, what can I say? Those issues are in there, and those discussions are inevitable. I guess I’ll just play the role of the guy wearing an old cardigan with leather patches on the sleeves, who pisses you off by suggesting that you’re missing the point.

If there is an overriding technical quality I perceive in “Carol,” beyond the dazzling yet restrained performances of Blanchett and Mara, and the fact that it is gorgeous beyond description and will break your heart, that would be its quality of attentiveness. Haynes and his production team pay attention to the smallest details: the construction and lettering of internal department-store signage circa 1952 (those free-standing steel frames!), or the tyrannical but frustrated demeanor of a floor manager in that era of full employment, or even over-employment. I especially like the guy whose job is to hand out Santa hats to Therese and her fellow employees as they enter the fictional B-plus store that isn’t quite Macy’s or Gimbels (it might be Wanamaker’s or the May Co. or Abraham & Straus), while muttering “Season's greetings, compliments of the management” in a Bronxian monotone.

I won’t insult Blanchett’s eye-popping wardrobe, in her role as a rich suburban housewife and barely closeted lesbian, as a minor detail; Carol’s oversized mink coat and painstakingly sculpted suits are more like characters unto themselves, or powerful natural forces shaping the future of the world. It would have been incredibly easy for Haynes or Nagy to overplay the imprisoning quality of Carol’s life in New Jersey horse country, or to make her cuckolded husband into a cartoon 1950s villain. But Carol always sees herself as a woman in charge of her own life (even if she’s not always right about that), and her husband, blessed with the unlikely but perfect name of Harge (Kyle Chandler), is angry and confused but not entirely hateful. We can feel Harge’s pain, up to a point: He played football at Yale or Princeton, pulls down the big bucks on Wall Street, and rather enjoyed marrying a free spirit who made his old-money parents uneasy. At least until the precise nature of her free spirit became clear.

I’ve seen “Carol” twice now, and there are a few shot sequences – Carol and Therese’s first meeting, amid the Christmas retail rush, or the beginning of the road trip they take together – that I could watch a dozen times through. Cinematographer Edward Lachman, who has been making movies for 40 years while somehow avoiding widespread recognition as one of the living masters of his craft, outdoes himself here with one spectacular image after another. Working in what I believe is old-school Super 16 film (with Haynes and editor Affonso Gonçalves guiding and shaping the results), Lachman captures the luminous love affair between the faintly predatory rich lady and the virginal shopgirl with an almost religious intensity, painting in space and backward and forward in time. As in Haynes’ 2003 interracial romance “Far from Heaven” – an obvious companion piece to this movie, and the source of Lachman’s only Oscar nomination – there are hints of European-style experimentation, but never enough to pull us out of the story.

You will notice by now that I’ve circled around the obvious focal points of “Carol.” All I can really say about Blanchett and Mara in this movie is that they both destroyed me in completely different ways, and that as memorable as they have been in other roles, I didn’t know either of them could do what they do here. If Carol is in some respects a mannered and exaggerated character – a beautiful woman playing the role of a beautiful woman, to calculated effect – she is vastly more convincing and more controlled than the Blanche DuBois nightmare that won Blanchett an Oscar in “Blue Jasmine.” As Carol observes several times, Therese is like a creature from another planet, an innocent trying things out with little understanding of what human society considers right or wrong. She orders whatever Carol orders in restaurants, like someone who has never seen a menu or cannot read one. Therese fails to see why falling in love with Carol should be categorically distinct from falling in love with a boy; if her upright posture, trans-Atlantic diction and newly hatched quality suggest Audrey Hepburn’s renegade princess in “Roman Holiday,” that may not be accidental.

I don’t want to spoil all the moments of delicate wit in Nagy’s screenplay, when Therese and Carol circle toward each other gradually, each knowing what she wants but not quite knowing how to get there. Their dialogue often or always carries multiple layers of meaning, as the conversations of people strongly attracted to each other often do: In discussing music or photography or family, they move ever closer to the central subject. Indeed, “Carol” works that way in general, acting simultaneously on the brain, the heart, the eyes and the ears. I haven’t yet mentioned Carter Burwell’s haunting score, which sets the mood by bridging the seemingly unbridgeable gap between Schubert, Duke Ellington and Philip Glass. Or the perfectly pitched supporting performance by Sarah Paulson as Carol’s slightly embittered ex-lover.

There are quite a few longer and more overtly ambitious releases still to come in the overcrowded ritual of Oscar season, and if I had to guess I would say that the artistic restraint and period setting of “Carol” will operate against it. (“Spotlight” remains the leading best-picture candidate, and no one outside the movie biz has yet seen David O. Russell’s “Joy” or Alejandro González Iñárritu’s “The Revenant” or Quentin Tarantino’s “The Hateful Eight.”) Much as I would love to see Haynes, Nagy, Blanchett, Mara and Lachman showered with awards for this amazing combination of classic Hollywood romance and 21st-century artistic sensibility, that’s ultimately not the point. “Carol” is a landmark in American movie history, and will endure, I suspect, after most or all of those movies have faded away.