Read about the lives and families of the 14 Afghan hospital workers killed by U.S. bombing 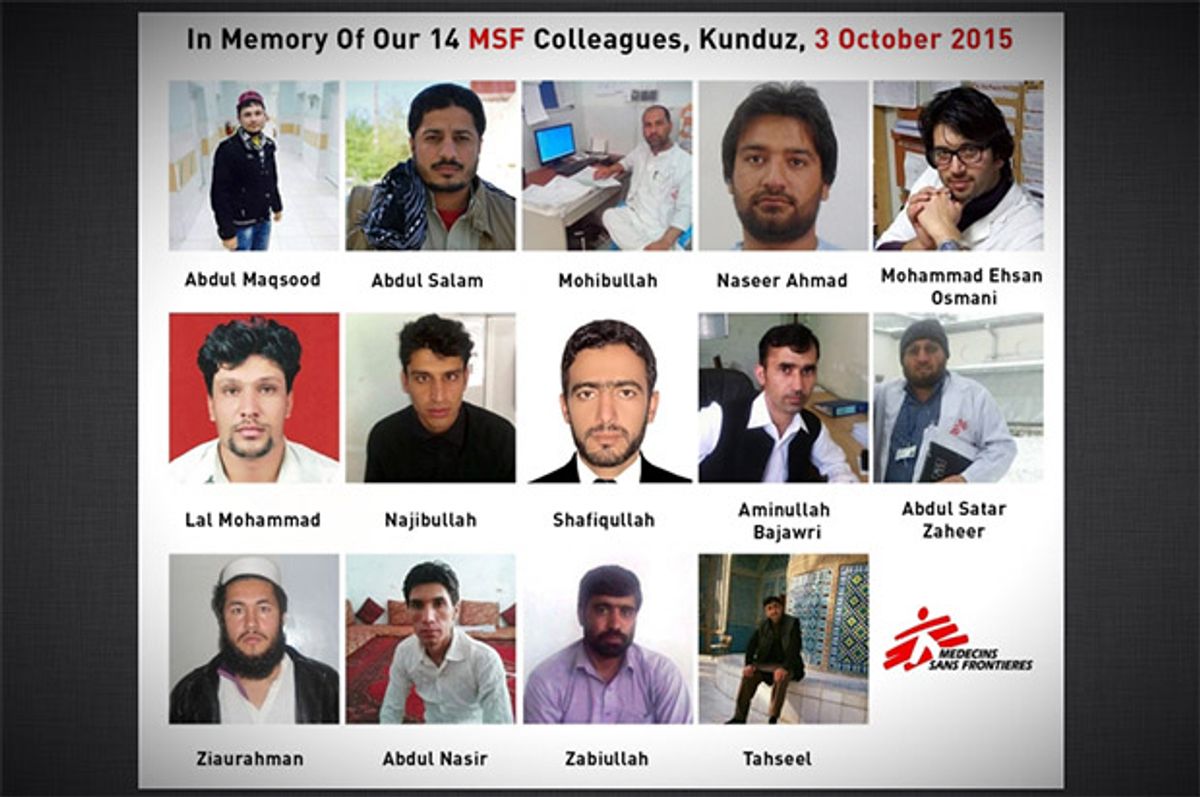 "October 3, 2015, will forever remain a dark day in the history of Doctors Without Borders/Médecins Sans Frontières (MSF)," wrote the international humanitarian organization in a statement announcing the identities of the 14 staff members killed in the U.S. bombing of its hospital.

"On that day, in the early morning hours, MSF's trauma hospital in Kunduz, Afghanistan, was hit with precise and repeated airstrikes for more than an hour," MSF continued. "Even as the attack continued, our colleagues fought for their lives and for the lives of their patients with extraordinary determination and courage."

30 people in all were killed in the U.S. bombing. A hospital nurse present said there "are no words for how terrible it was," noting "patients were burning in their beds." MSF released a phone log detailing 18 calls and messages the hospital made to American and Afghan officials as they were attacked for more than an hour:

The U.S. government's story behind the attack was full of contradictions and constantly changed — at least four times in four days. MSF accused the U.S. of war crimes, and the U.N. said the attack may indeed constitute a war crime. The U.S. has since refused to allow an independent investigation into its bombing, even while MSF, the U.N., and other organizations have called for one.

The Kunduz hospital was the only medical facility of its kind in northeast Afghanistan. The closest large hospital is hours away. After the attack, MSF withdrew from Kunduz, leaving behind a city full of besieged civilians who no longer have access to desperately needed medical care.

Doctors Without Borders officials visited the hospital in the aftermath of the destruction. They created a video in memoriam of those who lost their lives:

Too often, Americans forget that the victims of their government's bombings had their own lives and families. MSF shared these identities, so the world can read, if only briefly, about the medical workers who sacrificed their lives to help save lives.

Many of the staff killed in the bombing voluntarily chose to work long hours at the hospital, in order to care for wounded Afghans at a time of heavy fighting.

The victims ranged in age from 22 to 47. The majority were married; at least eight were fathers.

Abdul Satar Zaheer, 47, the deputy medical director of the MSF Kunduz Trauma Center, had eight children. He worked long hours, and, when his son asked if he could work less, Abdul would reply saying that he was not working, but rather serving the Afghan people.

Dr. Aminullah Bajawri, 32, also a father, overworked himself, and "felt personally responsible for any patients who did not recover while he was on duty." He taught at Kunduz University and was training in neurosurgery, because Afghan children often die due to the lack of neurosurgeons.

Abdul Salam, 29, was a father of two, including a newborn. He enjoyed playing cricket and Buzkashi (Afghanistan's national sport). MSF says that, during "the heavy fighting in the week leading up to the attack, he barely slept and worked long hours to help his people and colleagues as much as he could."

Abdul Maqsood, 22, was also described as an "enthusiastic and skilled" cricket player.

Lal Mohammad, 28, had three children, who will now go on without a father. Mohibullah, 38, was also a father, and the youngest of eight brothers. Najibullah, 27, is now leaving behind his own wife and child -- as is Tahseel, 35, who friends said always "had a great sense of humor." Shafiqullah, 39, who was said to "always have a big smile on his face," had four children, now fatherless.

One of the victims, Zabiullah, a married 29-year-old, was a poet and translator. He wrote in one of his poems:

Time will fly, but its memory will remain;

Wounds will heal, but its stain will remain.