The false resurrection of George W. Bush: Don't be fooled by calls to reassess his loathsome legacy

Our 43rd president looks reasonable compared to what came afterwards. But you shouldn't be fooled by appearances 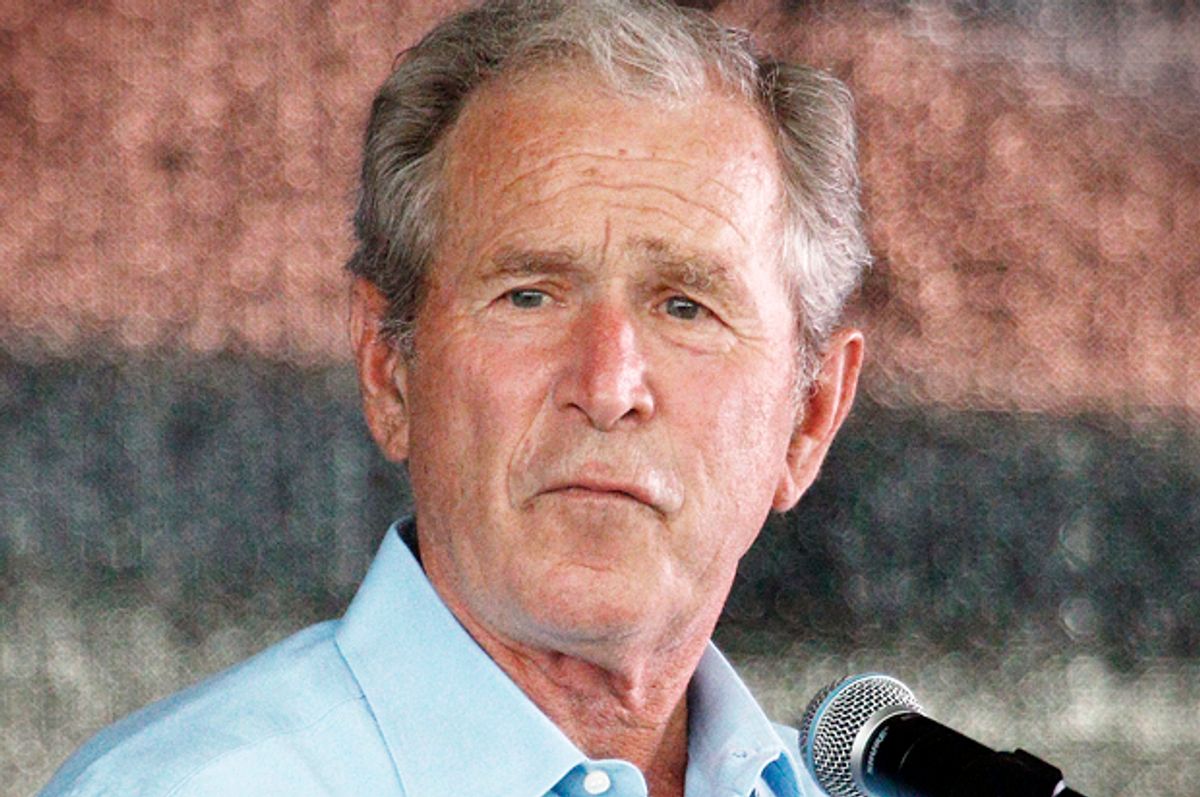 The Republican primary has proved that former president George W. Bush had something fifteen years ago that his younger brother Jeb does not: likability and an ability to connect on a personal level with white middle-class Americans, despite the fact that he was born into a family of massive political influence, the most successful political dynasty this country has ever seen, and enormous wealth.

In the years after Bush left office, where he sported a 37 percent approval rating over the course of his second term, he's done a remarkable job rebuilding his personal reputation back up somewhat in this same way, even with the liberals who vehemently opposed his policies during his administration.

This can be attributed partly to Bush making it a point not to criticize President Obama directly, as well as to some puppy paintings, and an effort to focus his philanthropic efforts on relatively uncontroversial topics, all to go along with the approval rating bumps that have accompanied every recent former president's exit from politics: among liberals in particular, Bush's approval rating has climbed 22 points since he left office. The less people hear or think about Bush, the more they like him.

With this in mind, coupled with the fact that a legitimate fascist is by far the most popular candidate running for the Republican nomination, Slate's Jamelle Bouie called on Bush last Friday to "speak to his party" about the rampant Islamophobia that has exploded since the 11/13 terrorist attacks in Paris. The argument goes like this: Bush, whose measured and nuanced response to 9/11 included starting wars with two countries with no exit strategy (which resulted in the nearly 200,000 deaths of Iraqi and Afghani civilians in those wars and contributed heavily to the rise of ISIS in Iraq), responded rhetorically to 9/11 by not blaming Islam as a religion, as most Republican candidates are currently doing.

“Bush worked hard to sow tolerance for Muslim-Americans, convinced—like President Obama—that respect and openness was an asset in the fight against jihadists. Integrated, assimilated communities don’t give aid to violent extremists. In the week since the Paris attacks, however, his would-be successors—the 2016 Republican presidential field—have jettisoned these efforts. Now, much of the GOP is stirring anti-Muslim sentiment. And perhaps the only person who can stop it—or at least, turn down the heat—is Bush.”

Bouie, who is an extremely smart writer, was predictably slammed for this, with the most common response being that he was either (a) excusing Bush's actions because of his good rhetoric in the Islamic Center speech, or (b) saying that Bush, who probably did more to wreck political stability in the Middle East than any Western leader since David Lloyd George, is an expert on Islam and Muslims.

Obviously, he wasn't saying either of those things, only that Bush is slightly better for not calling for the types of things Trump now is, and Bouie makes a salient argument that rhetoric matters a hell of a lot. When the leading Republican candidate is recommending surveillance of or even the "closing" of mosques, slamming the door on Syrian refugees and torture — essentially all of the worst parts of the Bush administration, plus an outwardly nativist, racist bent — and when the leading Republican candidate among Republican elite (and absolutely no one else) is completely dumbfounded that Hillary Clinton would be hesitant to use the phrase "radical Islam" after 14 years of continuous war with predominantly Muslim nations, Bouie is right to an extent: Bush's speech does matter.

Saying something like that, however, is also a magnet for criticism, and rightfully so: the immediate emotional response on the left is understandably along the lines of: "Why on earth would I want to listen to anything that George W. Bush has to say about the Middle East or Islam?" Comparing Bush and Trump or Rubio's rhetoric alone is too narrow — for all of Bush's talk about respecting other religions and cultures, the fact remains that the culture of fear his administration and party created in the aftermath of 9/11 has directly contributed to an atmosphere where Republican candidates can capitalize on the attacks in France as a way to stoke distrust of Muslims in the U.S without being relegated to the fringe of the party.

What Bouie's piece does gets right is that the last Republican president of the United States making an initial effort to assure Muslims that he wasn't declaring war on their religion is an important distinction from what any of the frontrunners for the nomination in 2016 are currently saying. It's also worth thinking about how, as bad as it was during the Bush years, it could have been even worse if someone like Donald Trump, Ben Carson, Ted Cruz or Marco Rubio were setting American foreign policy -- or even if Bush's party had veered as far to the right then as it is now.

What this line of thinking doesn't account for, however, is that Bush is the epitome of the establishment that ultraconservatives have been fighting against for the past several years. The problem is not that there isn't a sane Republican elder statesman who's willing to take on the Republican frontrunners; it's that this constituency simply does not respect or understand the government, and very few people who have ever served in it.

Every Republican presidential candidate since Nixon has tried to appease these ultraconservatives in some way, with Bush being no exception. Now, these activists dominate the party and have no interest in compromise. To them, Bush represents failure, a man whose expansion of government and less-than-right-wing rhetoric resulted in the Obama administration, the Boehner speakership, and nearly a decade of Republicans failing over and over at the federal level on issues ranging from the ACA and the debt ceiling to gay marriage and the failure of Congress to impose a Nativity scene on every Starbucks cup in America. Laura Ingraham's response to Bouie's piece sums it up: "Here's another liberal pining for the Bush days, Bush ways--confirming again why so many reject Establishment."

It's no mistake that Trump has attacked former party leaders like Bush and John McCain, and despite common sense dictating that slamming the party he wants to lead over and over again should probably not be a winning strategy, nothing that Trump ever says results in a significant backlash in the next week's polls. No other Republican candidate, besides Jeb, frequently cites George W. Bush as the model for their presidency — they’re far more likely to look toward Reagan, despite the fact that they have even less in common with him ideologically than Bush. The fact that two people who have never held elected office lead the pack right now is indicative of this hatred of politicians and government, and so the problem isn't that the Republicans don't have an elder statesman willing to bring the party back from the ledge — it's that they simply don't want one.