Visions of a Nazi America: How "The Man in the High Castle" both sharpens and blurs the lines between "us" and "them"

The television adaptation of the Philip K. Dick novel departs from the book but asks even darker questions 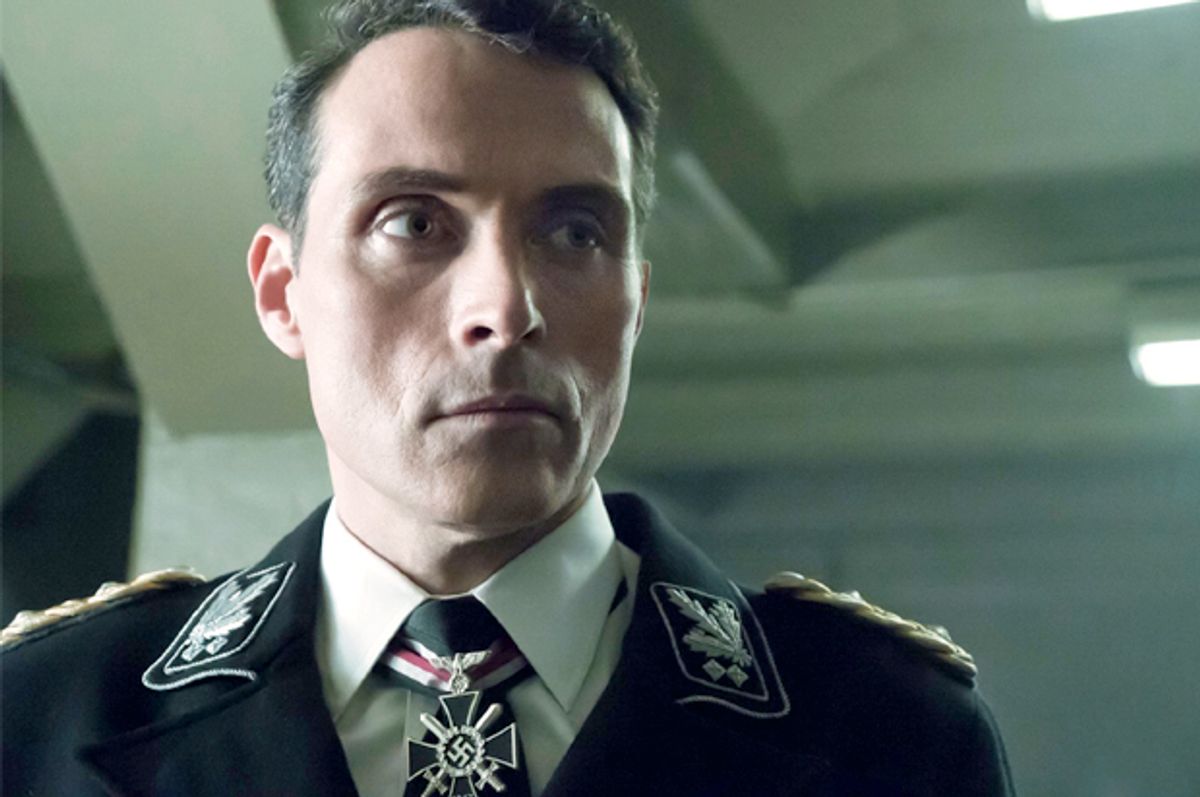 It really makes you think. That sounds like the faintest of praise, the most banal of observations—the punch line, even, to a joke. But: The beauty and power of “The Man in the High Castle,” Amazon’s new streaming series that was released all of a piece on Friday, is in how much self-reflection and close-reading it inspires—of the fictional world in the show, and of our own. The storytelling is flawed, but the vision of “The Man in the High Castle” is routinely arresting.

The story, loosely based on Philip K. Dick’s novel of the same name, is an alternate history where the Axis powers won World War II. Japan and Germany divide up America between them; Washington, D.C., has been flattened with a nuclear weapon. From the West Coast to the Rockies, the Japanese hold sway; from the Rockies to the Atlantic, including New York City, is the Third Reich. When the story begins, in 1962, the world has been this way for nearly 20 years. “Semites” are nearly eradicated; systematic extermination is an ongoing, “necessary” measure; and American culture has been reduced to an “indigenous,” “ethnic” curiosity.

“The Man in the High Castle” operates brilliantly at the micro level—the level of details. Every part of the show—from the casting of extras to the level of dinginess in the characters’ apartments to the type of food or drink ordered at a bar—tells a little piece of this massive historical reimagining. In California, miso soup and sake are staples; in Berlin, a German boy reads an American comic called “Ranger Reich.” In Long Island, an obergruppenführer adjusts his sleek silver tie pin, which reads “SS,” in a softer, more art-deco version of the lightning-bolt lettering that made up the official logo. Somewhere in San Francisco, in a dive bar run by the Yakuza, a white singer croons Japanese pop ballads.

The specific way in which the show uses swastikas is its own sub-story; at first, the Nazi symbol seems implausibly ubiquitous, but after spotting one where an American flag might be—in a logo for a pay phone—the idyllic suburbia dotted with swastika pins is eerily familiar. Dusting off the most horrific symbol of fascism—an association so potent and corrosive that anything else the swastika means is lost to the West—and integrating it into this imagined piece of history is the semiotic equivalent of juggling flaming knives. The viewer is confronted with the Nazi swastika, and is forced to consider what it meant to a different group of people; is forced, too, to contemplate the ubiquity of our own logos and symbols, and what point we might be trying to prove.

On top of these details is a show that is technically breathtaking; it is simply filmed beautifully, framing each character in his or her private hell and seamlessly integrating the CGI elements of that other world order with what we know and can identify. Amazon Studios has yet to have developed a really successful drama, but it does, in the meantime, have a lot of cash. Giving that money to showrunner Frank Spotnitz (who spent many years working on “The X-Files”) results in lush set pieces, astonishing art direction, and a show that pays homage to film from both New York and San Francisco, as New York Mmagazine’s Matt Zoller Seitz explains.

It’s been a banner season for references to Hitler. Ever since that odd New York Times Magazine Twitter poll, which rehashed a faux-philosophical debate from the halls of dormitories, the question of alternate realities with or without Hitler seems truly relevant. Specifically, Republicans: former Gov. Jeb Bush told the Huffington Post “hell yeah,” he’d kill baby Hitler; then Dr. Ben Carson averred that he would not abort baby Hitler. And after Donald Trump once again dog-whistled for a national registry of Muslims and Ted Cruz proclaimed that only Christian Syrian refugees should be allowed into America, many asked if those acts evoked none other than Adolf Hitler, in style and in substance.

“The Man in the High Castle” comes to us at a very strange time in American politics. The same nation that would lead the world on tolerance, action against climate change, and economic sustainability is also digging its heels in, fueled by a hatred and paranoia that is frightening when confronted in all of its glory. It is always "us” and “them” in political rhetoric. And indeed, showing (at least on the West Coast) a foreign power oppressing white Americans in favor of the Japanese is a particular fear many Americans thrill to. “The Man in the High Castle” both sharpens and blurs the distinctions between “us” and “them,” introducing first a premise where “they” win, and then demonstrating how “us” becomes “them,” and “them” becomes “us.” It’s able to point to how we perpetuate racism, xenophobia and censorship, with these narrowly defined, easily shifted lines. Dick, not much of an optimist, found that pointing out the fissures in human existence is what he could do for us. Spotnitz takes the story in quite a different direction.

Hitler is, in fact, in “The Man in the High Castle.” The Führer is, by 1962, an enfeebled and mostly remote figure of power. He lives in a mansion in the Alps, watches old films, and is trotted out for major holidays like V-A Day. He might, himself, be the titular man in the high castle—he certainly seems to have a weird understanding of the past, the present, and of what could have been. And it’s fair to say that the real-life Hitler had a strong understanding of the power of an alternate narrative.

The most amazing thing Spotnitz’s show pulls off (in the finale—spoilers!) is in bringing you to the point where you see someone able to kill Hitler—pointing a gun at his head—and as you are watching, you are hoping that he won’t. The unstable alliance between Japan and Germany will crumble if the old man is assassinated; nuclear war will surely follow. The man holding the gun is a good man—a Nazi who loves his family, who cannot sleep at night because of the atrocities committed by his party. But he can’t do it. There is no Jeb Bushian “hell yeah.” The alternate timeline isn’t extinguished; the flow of history isn’t set aright. Instead the good man puts the gun to his own head, and kills himself. If we are the real characters of “The Man In The High Castle,” facing our own Hitlers, this is not encouraging information.

But perhaps there is an alternative. While Hitler is facing down an assassin in Berlin, on the other side of the world, a man sits down on a bench in San Francisco. He is the Japanese trade minister, and as the season has gone on, he has seemed increasingly worn down by the weights of his office, the duties of the oppressor. In what is “The Man in the High Castle’s" most surreal and brilliant moment, he closes his eyes and simply believes, and when he opens them again, his world is our world. Market Square is filled with American billboards and white teenagers. The season ends with the haunting suggestion that the simulacrum has become self-aware (which is another nod to the novel). Is the takeaway that a gun is less effective than a vision of a different world, when it comes to changing the course of history? Or, more chillingly, is it that nothing really ever changes, no matter which dream you dream?