Never accept a Thanksgiving invitation from a chef who serves cheese soup, liquid pie or a "Turketta" 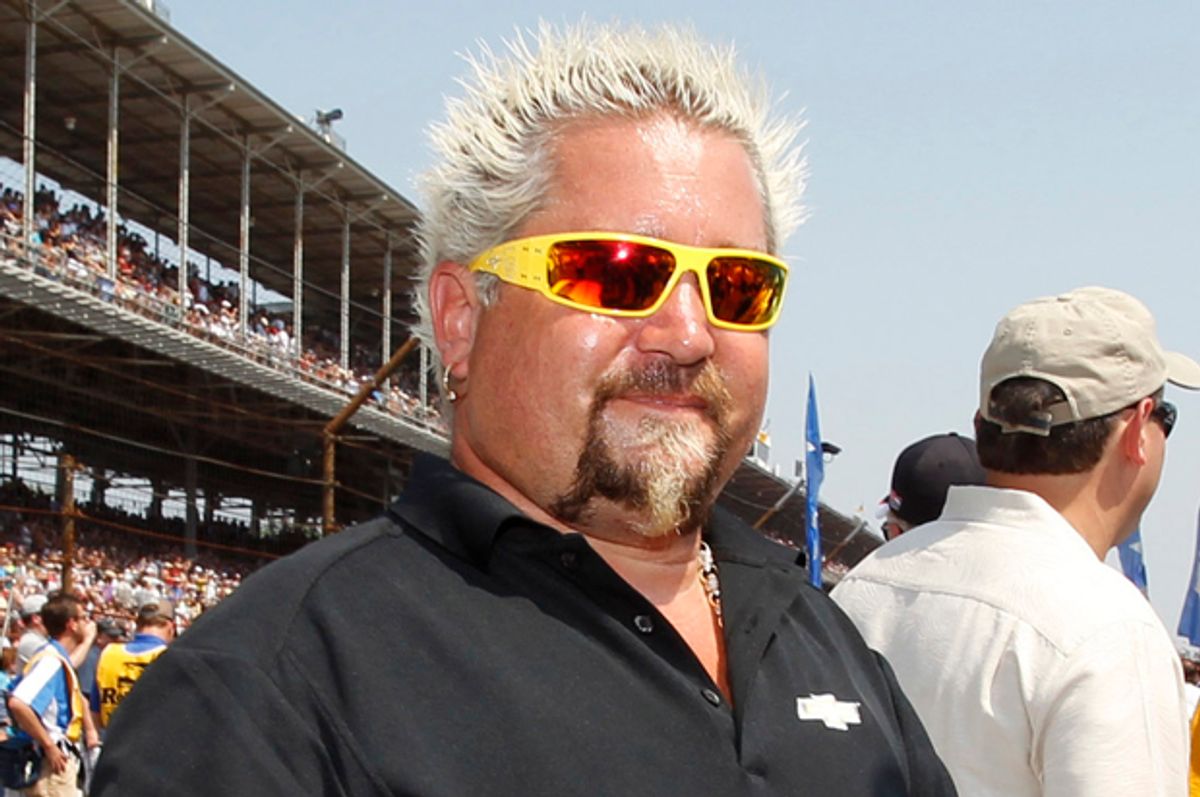 Food Network is the guiding hand for many through the stress of the Thanksgiving meal, but what happens when our trusted culinary guardian angels lead us astray? Let’s take a look back at some of the more perplexing recipes that the network has suggested we make room for on the holiday table.

Ever reach the point when you are so strung out on tryptophan that you don’t have the energy required to lift a forkful of pie to your mouth? No fear -- Ree Drummond (aka “The Pioneer Woman”) has the perfect solution. Just toss the pie in a blender with milk and yogurt and pulse until it can be sucked through a straw.

I’m all for fusion cuisine, but I never thought I’d hear the instructions:  “Drain the ravioli into the gravy and stir to coat.” Giada’s take on the holiday meal seems more like the day after the day after Thanksgiving when you make a sad grab for whatever leftovers are still good and combine them with the pre-Turkey Day remnants stashed in the back in the fridge. It tastes fine, but then you decide to stop kidding yourself and smother it all with gravy because you know you’ve already sized out of your jeans and there’s no way to stop the cycle now. In short, Giada’s Turkey and Cranberry Ravioli recipe is self-loathing on a plate. To make it even more depressing, this is for her special “Thanksgiving for Two” episode; but I suppose that just means there’s more gravy to go around.

For the holiday table that could use a little tye-dyed flair, simply take two of the most common potato side dishes -- mashed and sweet -- and swirl them in a bowl. The result is simultaneously noncommittal and underwhelming (just what your parents say about your partner, right?)  and it’s the antithesis of Bobby’s labor-intensive potatoes below.

Now, don’t get me wrong. These potatoes look beautiful, and they taste delicious as well, but only Bobby Flay would suggest a sweet potato side dish that has to be boiled, charcoal grilled and flambé finished, all wrapped with the suggestion to “serve immediately,” as if sweet potatoes are your only holiday meal responsibility.

Don’t worry, though. If you spend too much time ensuring that you don’t singe the potatoes (and your eyebrows) and end up turkey-less, Food Network Magazine has you covered. One of their tips for decor includes a $12 inflatable bird complete with this calming sentiment: “No matter how your Thanksgiving dinner turns out, you’re guaranteed to get ‘oohs’ and ‘aahs’ when you walk out of the kitchen with this 16-inch, golden inflatable turkey. Everyone can have a laugh -- and play toss with the imposter -- while you [hopefully] carve the real thing.”

Happy Thanksgiving from Flavortown! No list would be complete without Guy Fieri. In an interview with Rolling Stone, Guy talked about his Thanksgiving menu: “This year I’m stuffing a pork tenderloin inside of a de-boned turkey. So I’ve got a turkey here, I’m taking all the bones out of it and then hitting it with some sausage, fennel, sage, garlic, red chili flakes, and then I’m rolling it up and tying it off and roasting that whole thing. So that should be interesting. I’m calling it a ‘Turketta.’”

Sandra Lee is basically your perpetually drunk aunt who attempts to mask her crippling alcohol problem by giving her cocktails cutesy little names like the Mayflower Martini and then hides vodka in the cranberry sauce, like in this recipe.

You know how there is always that one person at holiday gatherings who you can’t quite place, and frankly aren’t even sure why they’re in attendance? Rachael Ray’s Cheddar Soup With Crispy Tortilla Crunch recipe, which was featured in her “Thanksgiving in 60 -- 2”  special, is that rando’s culinary equivalent.

This is a quintessentially Paula Deen recipe from back in the day. Take chilled, jellied cranberry slices and slap a mixture of cream cheese and “good quality mayonnaise” between layers. Delicately garnish with toasted pecans, and enjoy until your your blood sugar spikes and arteries clot in tandem.

What does Paula have against normal cranberry sauce? In this version, instead of slathering the chilled slices with white goo, you dredge them in flour and deep fry them until golden brown. Someone please pass the Lipitor.

10. Not Your Mama’s Green Bean Casserole

Do you remember “Party Line With the Hearty Boys,” the show pitched by The Next Food Network Star Season 1 winners Dan Smith and Steve McDonagh? I doubt it; and it’s recipes like this -- featuring a slick of off-gray mushroom sauce and a bird’s nest of “frizzled leeks” -- that probably led to the show’s eventual cancellation.