Reasons to give thanks: America is a total mess -- and some of it is good news 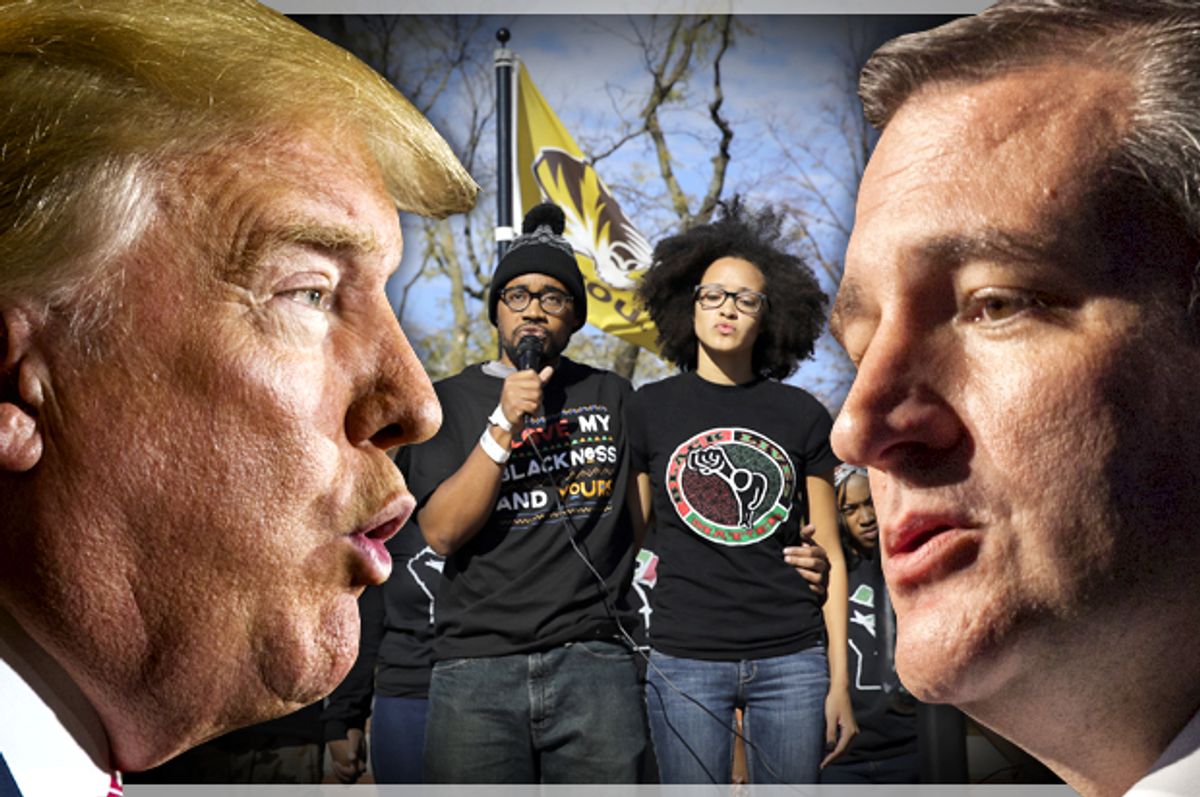 There’s a ritual of American journalism that goes back nearly as far as the Thanksgiving holiday itself, a holiday largely concocted to create an aura of fictional harmony around the painful and complicated history of early encounters between Anglo-Saxon settlers and Native Americans. That ritual consists of assuring readers that we have plenty to be thankful for in our national life as we find it now, despite all the obvious things that have gone wrong. It’s a truism that has the virtue of always being true, even in a year of political insanity, intense domestic discord and rising international tensions when the reasons for communal or national gratitude seem elusive.

The episodes in American history that lie behind this paradoxical holiday present us with an intractable series of what-ifs, straight out of “The Man in the High Castle” or “Inglourious Basterds.” As far as we can tell, in struggling to separate truth from legend, there were people of good will among both the Pilgrims and the native peoples of Massachusetts, who did not foresee a future in which one people would wage wars of conquest from coast to coast, while the other would be relentlessly persecuted and dispossessed. Did things have to turn out as they did? In some alternate stream of reality, did America end up more like the bicultural society imagined by the Quaker leader William Penn and the great Lenape chief Tamanend, who both died believing they had put the territorial enmity between their respective peoples to rest?

There’s no answer to questions like those, and also no point pretending that what happened in North America was all that different from the pattern of exploration, conquest and colonization repeated all over the globe. Sometimes American exceptionalism can be found on the left as well as the right, in the claim that our history of genocide, slavery, racism and imperialism is uniquely appalling and renders the other, better stuff – the preamble to the Declaration and the Gettysburg Address, Louis Armstrong and Elvis Presley, Huck and Jim’s flight to freedom and Nick Carraway’s final reverie, the opening scenes of “Goodfellas” and “Do the Right Thing” – irrelevant or worse.

American history is a few panels in a large and bloody tapestry, and is entirely bad enough as such without beating our breasts and declaring our nation the worst of the worst, the elect among the damned. (Max Weber’s observation that all Americans are Protestants, whether they realize it or not, never stops being true.) You can understand where that overreaction comes from when you consider the grotesque delusions that still fuel so much of American cultural discourse, informing the decisions of roughly half the voting public and roughly one and three-quarters of our two political parties.

When Donald Trump and Ted Cruz and the other raving lunatics and epic hypocrites in the Republican Party – to call those people “clowns,” one of the clichés of this cycle, is an insult to an ancient and honorable art -- announce that our God-given greatness and divine destiny have been tarnished by sinister forces, but can be restored through further enriching the rich, widening the scope of endless war and victimizing the weakest among us, Democrats offer no clear and consistent answer. The best they can do, generally speaking, is to mumble that yes, we do have a God-given destiny of some kind, if we can only figure out what it is. It might turn out not to be about blowing up villages on the other side of the world and being incredibly mean to poor people and reverting to feudal oligarchy! Or at least not about doing those things quite so enthusiastically. Why is anyone surprised that in the popular imagination Democrats are perceived as spineless? The problem is not their policies, which are reasonably coherent if often disappointing; it’s their strategy of responding to religious hysteria and mass delusion by agreeing with it a little. In Salem Village, they’d have been the people arguing that we must be judicious in determining which of these girls really had sexual congress with the Horned One.

But I’m not seeking to fulfill the tradition of the Thanksgiving Day journalistic thumb-sucker by telling you that we should all be grateful not to be the worst country in the history of the world, or that we should celebrate the good kind of patriotism, as epitomized by Martin Luther King Jr. or Bruce Springsteen or whomever, and reject the bad. I am in fact profoundly grateful that our culture is still robust enough that we can make fun of Donald Trump all day long while being reasonably sure he won’t end up sending us all to internment camps. (I won’t say 100 percent sure; beneath our mockery runs an obvious undercurrent of fear.) Those things are distinctly better than the alternatives, but they don’t quite seem like enough in this year of deepening crisis and evident peril. Where I do see some reason to be grateful is in the renewal of our painful struggle with American history itself, a struggle that has been coterminous with the American project since at least the middle of the 19th century and has now reached a critical phase.

Everything about this cultural and political moment speaks to that struggle. I have repeatedly argued that the Republican Party, intentionally or otherwise, is pursuing approximately the same goals as the Islamic terrorists they despise so fervently and have vowed to annihilate. Both groups think democracy has gone rotten, and was probably never a good idea in the first place. They would like to replace it with a godlier and more masculine system with a firmer backbone and sharper teeth. It is equally true, and less controversial, that the Republicans dream of rolling back American reality to some halcyon past. This is customarily understood as an imaginary version of the 1950s, with sock hops and stay-at-home moms and all-white suburban neighborhoods and the total invisibility of immigrants and homosexuals. But that’s only part of the picture: Republicans would not like the actual 1950s, when taxes on the wealthiest Americans reached all-time highs and domestic spending on infrastructure and social programs went into overdrive, in an effort to fend off the Communist menace.

Whether they know it or not, what right-wing zealots really want is more like a modern-day reinvention of the pre-Civil War era, when propertied white men literally held all the power and such troubling concepts as equal rights for women and African-Americans, or birthright citizenship, effectively did not exist. In the Dred Scott decision, the Supreme Court specifically rejected the idea that everyone born in the United States was a citizen by default. Blacks had been defined as property in the Constitution, in the logic of Chief Justice Roger Taney and the court majority, and had no inherent rights at the federal level. State law and property rights trumped all abstract conceptions of universal human rights or the common good. In the wake of Scott, it was not even clear whether the laws banning slavery in Northern states were constitutional. Sen. Stephen Douglas, Lincoln’s great debating rival, suggested that anti-slavery states could rid themselves of the “peculiar institution” only in a negative or passive fashion, by declining to enforce the rights of slaveowners.

I’m not suggesting that today’s Republicans literally want to bring back slavery and the plantation economy -- although a lot of them are really sick of hearing about how terrible it all was. (When really, you know, the slaves had it easy compared to people who had to work in factories in Boston or New York! An argument widely used in the 1850s as well.) But birthright citizenship for all immigrant children, along with the women’s suffrage movement and feminism and the civil rights movement and the LGBT movement and a whole lot of other stuff Republicans view as more or less un-American, are all the direct offspring of abolitionism and the 13th and 14th Amendments.

Republicans sometimes still call themselves the Party of Lincoln, but in their hearts they know the truth. Abraham Lincoln came to abolitionism pretty late in the day, and would never have used that word to describe his position. He held overtly racist views as a young Illinois politician, largely consistent with his place and time, and never felt quite sure about full social equality for black people. But his radical re-reading of Jefferson’s preamble and its “self-evident truths” as a challenge the nation had to meet one day, or destroy itself, permanently altered the course of American history. I say “permanently,” but that presumes too much; the plutocrats and oligarchs and neo-Confederates and constitutional fundamentalists have chewed away at the American riverbank for many decades, like a horde of diabolical beavers, in hopes of altering history's course back again.

One reason the American right has reacted with such exaggerated outrage to the Black Lives Matter movement, or the resurgent student radicalism of 2015, is that such things suggest that the Republican plan of reconquest and reformation will be a lot more difficult than they thought. Give them credit: The Republicans and the forces behind them have come a long way toward their goal, conquering state house after state house, cementing a congressional majority until at least 2022, thoroughly paralyzing the legislative process and draining the life out of the electorate. The Koch brothers and their allies have been a step ahead of their opponents for at least a decade now, and the Democratic Party’s purported demographic advantage has been rendered nearly meaningless. The masterminds of the right have thoroughly gamed the system, but they forgot about the people it is nominally meant to serve. Now they face a new generation that is pissed as hell and eager to claim its share of power. If voting doesn’t work anymore, there are other forms of politics.

Whether those of us in the left-liberal commentariat believe that every single Black Lives Matter protest has been righteous, or every instance of racial misunderstanding or insensitivity on campus has merited trying to shut the place down and get people fired, is almost entirely beside the point. The campaign to end police shootings of unarmed black men is self-evidently more urgent than the campaign against the stereotype that women can’t be comedians, or the campaign for better representation of trans people in the media. Those things, along with our sudden moment of reckoning with the legacy of racism in higher education, or the debate about whether male leftists who attack Hillary Clinton are misogynist, are all different from each other. They have caused considerable discord, and will cause more; they will be valued in different ways by different people. But they are also closely related, and not because there is some orthodox, politically correct position that unites them or renders them equivalent. (There isn’t.) They belong to the long wrestling match with American history, they are part of our agonizing, inch-by-inch struggle to imagine or invent something closer to an egalitarian democracy, “a more perfect union.”

So I will be guardedly thankful, as I sit down today over turkey and cranberry sauce and pumpkin pie (none of which, as we now understand it, the Pilgrims and the Native Americans ate together), for the dangerous mess of America in 2015, with all its anger, its unresolved conflict and its seedlings of hope. Up to a point, I am thankful for Donald Trump, the scariest home-grown despot in many a year, for all the things he has revealed to us (most of them horrible), and for providing every single Thanksgiving table in our great land with a topic of conversation that will end with brooding silences and smashed gravy boats. I will be even more thankful when and if he finally goes away.