While the right constantly points to the founding fathers as exemplars of its philosophy, the truth is more nuanced 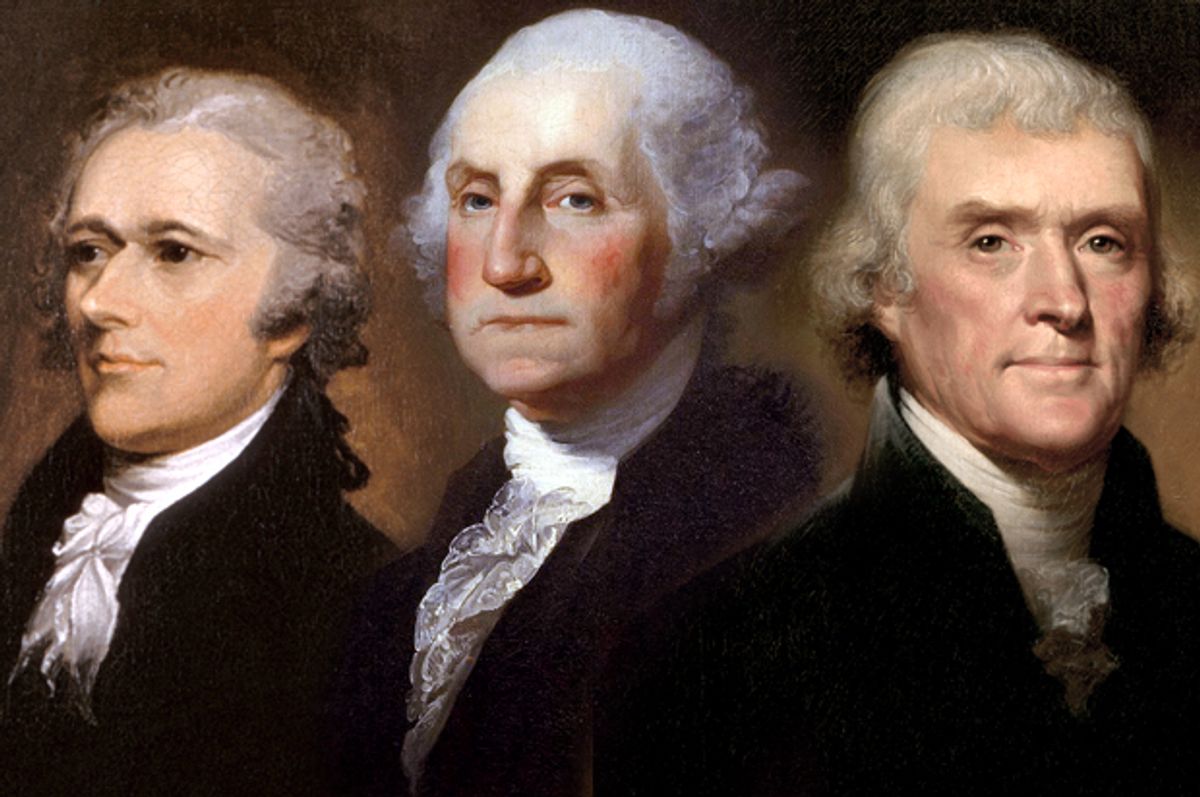 If you’re a Democrat (or, for that matter, a progressive of any stripe) the chances are you’ve heard conservatives evoke the founding fathers when dismissing your beliefs on economic issues. The term “socialist” has become such a toxic epithet in our political culture that the two chief candidates for the Democratic presidential nomination have spent considerable time confronting the term – with Hillary Clinton correctly pointing out that it doesn’t apply to her center-left views, even as Bernie Sanders valiantly strives to remove its stigma by self-identifying as a “democratic socialist.”

In light of all this, one might be forgiven for assuming that America’s founders were unilaterally right-wing in their economic ideology. After all, if this wasn’t the case, liberals could easily debunk attempts to delegitimize them by simply citing the incontrovertible facts of American history.

Which brings us to the five reasons why liberals can be just as comfortable as conservatives in claiming the founding fathers as their own.

1. The founding fathers constantly disagreed with each other.

It is easy to talk about the founding fathers as if they were a monolithic body, but as records of the Constitutional Convention and The Federalist Papers clearly demonstrate, the men who created this country disagreed on everything from the enumerated powers in each branch of government and the abolition of slavery to, yes, the role that the state should play in regulating economic policy.

Since there are too many examples of the latter to comprehensively discuss in one article, I’ll limit my exploration to one of the most fundamental questions of all -- the general welfare clause of the Constitution (Article 1, Section 8, Clause 1), which empowers Congress “[t]o lay and collect Taxes, Duties, Imposts and Excises, to pay the Debts and provide for the common Defence [sic] and general Welfare of the United States.”

When conservatives argue that “general welfare” does not cover left-wing economic policies, they often cite James Madison (from The Federalist No. 41), who argued that it should be construed as narrowly as possible, insisting that “it would have been difficult to find a reason for so awkward a form of describing an authority to legislate in all possible cases.” Less than four years later, however, Alexander Hamilton argued that the term “general welfare” simply referred to Congress’s power to impose taxes for any program that would serve the broader public interest, pointing out (in his Report on Manufactures) that “it is therefore of necessity left to the discretion of the National Legislature, to pronounce, upon the objects, which concern the general Welfare, and for which under that description, an appropriation of money is requisite and proper.”

While legal and historical scholars disagree to this day as to whether Madison or Hamilton was correct, there is no question that they shared the same basic difference of opinion on economic questions as many Americans today. That said, there is one point on which they would not have disagreed.

2. The Constitution was created because America’s first government was too weak.

Despite their penchant for name-dropping the Constitution as proof that the central government should be as weak as possible, conservatives ignore that the Constitution was actually written because America’s first federal government was too weak. Signed in 1781, the Articles of Confederation did not allow Congress to impose taxes, impose uniform tariff policies throughout the country, or effectively address the economic concerns of ordinary citizens -- in particular, those who had incurred massive debt during the American Revolution and were being hounded by their creditors.

This last detail is especially important, since James Madison himself later wrote that it “contributed more to that uneasiness which produced the Constitution and prepared the mind for a general reform” than any other problem. As a result, the Constitution included protections for citizens facing bankruptcy, explicitly allowed Congress to collect taxes, and in general focused on fixing the problems that had become apparent in the Articles of Confederation.

That said, as Madison admitted in a private letter in 1832, economic powers that didn’t appear in the Constitution weren’t always rejected or not adopted because the federal government wasn’t intended to have them. “Without knowing the reasons for the votes in those cases, no such inference can be sustained,” Madison observed. “The propositions might be disapproved because they were in a bad form or not in order; because they blended other powers with the particular power in question; or because the object had been, or would be, elsewhere provided for.”

This may not seem like a big deal today, but when President Washington signed the Postal Office Act of 1792, he created what was then the most far-reaching and sophisticated postal service in the Western world. In the process, the post office actively worked to make Americans into better democratic citizens by shaking them out of the provincial mindsets they would otherwise develop from living on farms or in small towns before the Industrial Revolution. As historian Richard R. John explains in his award-winning book on the subject,

“By facilitating the regular transmission of information throughout the length and breadth of the United States, the postal system provided ordinary Americans with information about the wider world that they could obtain in no other way.”

Perhaps just as importantly, the post office allowed the federal government to create thousands of jobs. By the 1830s, more than three-quarters of the entire federal civilian workforce was employed by the post office (roughly 8,700 people), and the postal service was so widely regarded as necessary that other politicians who advocated creating jobs through infrastructure spending could point to it as an example. This brings us to our next point.

4. Thomas Jefferson reduced the federal debt so he could use the anticipated budget surpluses on economic programs that would be described as left-wing today.

As historian Frank Bourgin explains in his book “The Great Challenge: The Myth of Laissez-Faire in the Early Republic,” President Jefferson had fought since the beginning of his political career for homesteading policies that would give away free land in the Western territories -- which, in an era when land ownership often mattered as much or more than financial worth, could have easily been considered “political gifts” by his opponents. Yet Jefferson did this not only because he hoped to encourage Western settlement, but because he sincerely saw no contradiction between maintaining a “small government” and using the state to economically assist ordinary people.

This is why, when Jefferson succeeded in creating a budget surplus, he quickly proposed that the funds be used to create a top-notch public education system, subsidize scientific and technological innovation, and build transportation and other forms of infrastructure that would strengthen America as a world economic power even as it provided jobs for members of the working class. He even hoped that America would one day embrace taxing the wealthy in order to finance programs that helped the general public:

“We are all the more reconciled to the tax on importations, because it falls exclusively on the rich, and with the equal partitions of interstate estates, constitutes the best agrarian law… Our revenues once liberated by the discharge of the public debt, and its surplus applied to canals, roads, schools, etc., the farmer will see his government supported, his children educated, and the face of his country made a paradise by the contributions of the rich alone, without his being called on to spare a cent from his earnings.”

How was this possible? Well…

5. Thomas Jefferson, despite his small government ideals, was flexible when it came to the important issues of his time.

Jefferson’s economic policies are noteworthy not only because he authored the Declaration of Independence (much as Madison co-authored the Constitution), but because they reveal his willingness to keep an open mind about his earlier ideological assumptions. After all, Jefferson had proclaimed in his first inaugural address that good government should be “wise and frugal” and, though “restrain[ing] men from injuring one another, shall leave them otherwise free to regulate their own pursuits of industry and improvement, and shall not take from the mouth of labor the bread it has earned.”

While this philosophy may seem irreconcilable with his subsequent policies, Jefferson learned early in his presidency that small government ideals aren’t always practical. This was most famously demonstrated in 1803 when, quite unexpectedly, Napoleon Bonaparte offered to sell the Louisiana Territory (then owned by the French empire) to the United States. Although Jefferson knew that the Constitution didn’t clearly grant him the authority to accept what is now known as the Louisiana Purchase, he believed that the enormous benefit of doubling America’s size (the territory consisted of 827,000 square miles) more than outweighed the ideological objections of those who held to an anti-government philosophy -- including his own. “It is the case of a guardian, investing the money of his ward in purchasing an important adjacent territory,” he wrote at the time, “and saying to him when of age, I did this for your good."

Although technically not a founding father, Abraham Lincoln is without question one of the most widely beloved Americans to ever occupy the presidency. More importantly, though, he was the first Republican president, which makes it symbolically appropriate to conclude with a quote from his 1861 State of the Union message:

“Labor is prior to and independent of capital. Capital is only the fruit of labor, and could never have existed if labor had not first existed. Labor is the superior of capital, and deserves much the higher consideration.”

This, when all is said and done, is the bottom line. At a time when income inequality continues to grow and an increasing number of Americans are attracted to the economic populism of politicians like Bernie Sanders and Hillary Clinton, it is important to remember that political liberty is hollow indeed if it isn’t accompanied by economic security. While America’s capitalist economy has made it one of the most prosperous nations the world has ever seen, it has also created conditions that require government intervention on behalf of laborers. If conservatives believe that those policies won’t work, they have the right to say as much. When they do this by trying to claim that the founding fathers would have rejected progressive alternatives as un-American, however, they do a disservice to the country they claim to want to help – and get their facts wrong in the process.