Black Friday is the Donald Trump of holidays: Inside the absurdity of a holiday tradition

Countless Americans lined up at the crack of dawn today in order to get the best deals. Oh brother... 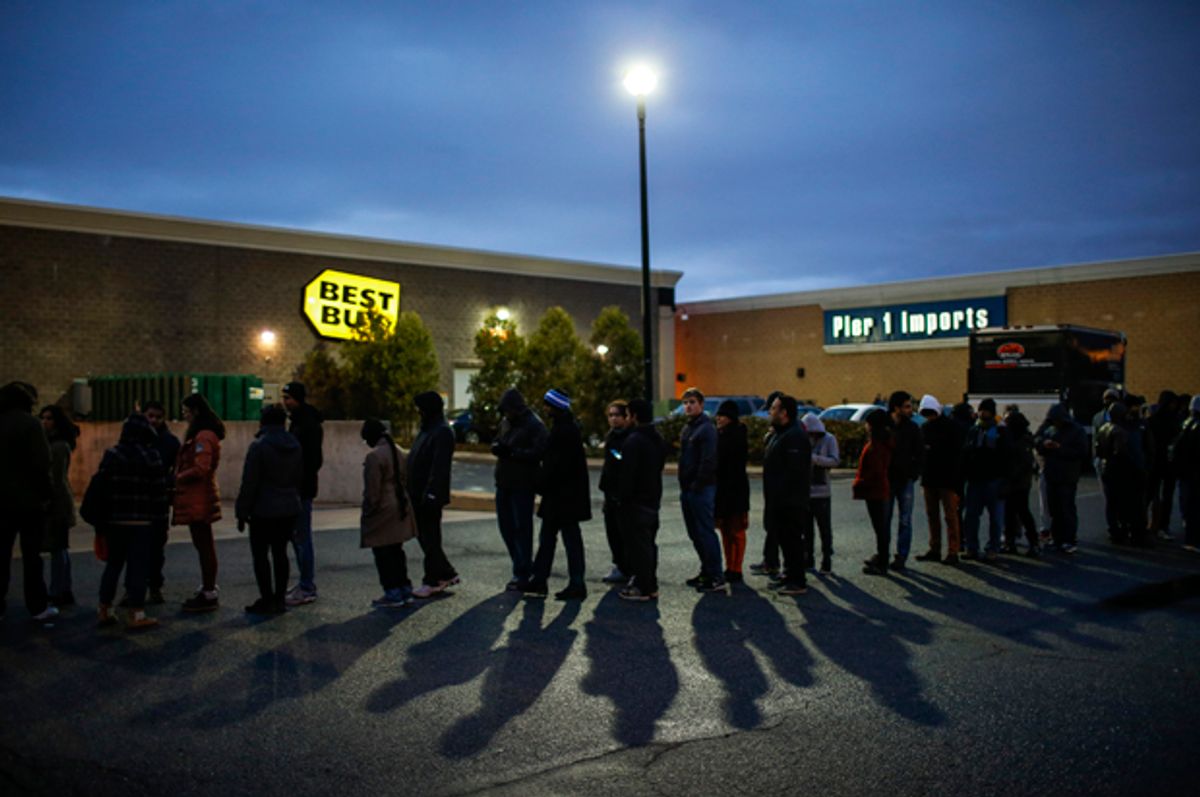 Black Friday is not unlike Donald Trump. It's obnoxious and humiliating, yet it remains invariably popular.

It's difficult to think of another annual occasion that combines American excess with American indignity more than the day after Thanksgiving. No other episode in the calendar year illustrates our unique penchant for trading our self-respect for discounted merchandise. Sure, it's something many of us do in micro-doses throughout the year, even in the shadow of the Great Recession when we ought to know better. As if the recession never happened, we're still culturally obsessed with conspicuous consumption, financed with credit because it's our only way around flatlined incomes and sketchy employment prospects.

While right-wing media figures have for years bemoaned a "War On Christmas," in reality, there’s a war for Christmas, insofar as we're still obligated by our consumer culture to purchase big-ticket items as a measure of social worth. And since we can’t afford much of it, too many of us are left with no choice but to blitz Wal-Mart at the crack of dawn, a way to overcome the dissonance between having less money, more credit and relentless corporate/socioeconomic pressure to buy cars, TVs and gadgets.

Not only do Americans sell out their dignity every year on this day -- captured on camera behaving like possessed, bug-eyed monsters in the name of buying crap we don’t need -- but there's also a series of major downsides connected to our favorite consumer holiday.

Our collective Black Friday shopping fracas has become so ridiculously uncivilized that there are analytics predicting which states are most likely to have fights over discounted merchandise. Estately.com correlated the number of Black Friday assaults with social media enthusiasm for Black Friday shopping and determined that the following states have the highest rate of in-store fisticuffs during the mad dash for alleged bargains.

Not surprisingly, many of these states are among the poorest: Mississippi, West Virginia, Arkansas, Alabama, Tennessee and Louisiana. In other words, middle- and working-class incomes have become so untenable, and the pressure to keep up with the bling we're expected to own, Black Friday brawls become more prevalent as incomes decline. Again, if you don't have a lot of money and you're relying upon Black Friday sales in order to satisfy the cultural demand to own things associated with higher incomes, you'd better be prepared to throw down in order to get there.

There's something truly awful about it. Rather than building stronger middle- and working-class incomes to keep up, our politics and our corporate culture have collaborated on a humiliating work-around: cheaper crap that you might have to fight for. Not too long ago, politicians from both parties working in conjunction with their corporate bosses began to send American jobs overseas in pursuit of cheap labor. Back home, we're forced to take jobs for lower pay and less advancement, and the outsourced manufacturing yields relatively inexpensive products sent back to our stores. Cutting to the chase, rather than being compensated with more money and better jobs to afford the things we want, we're forced to earn less while being sold cheaper, more disposable goods.

And nowhere is this dynamic more obvious than on Black Friday.

Adding insult to injury, The Wall Street Journal and Kiplinger.com discovered that Black Friday deals aren't very good ones. Indeed, we can actually buy many items for less throughout the rest of the year. (Per Amanda Girard at U.S. Uncut.)

So, we're expected to participate in a Black Friday melee every year, even though the bargains aren't really bargains insofar as we can pay similar prices elsewhere during the year and we don't have to trample people to do it.

Worse yet, lower prices tend to be compensated for by cutting costs elsewhere. Bayard Winthrop of American Giant, a clothing manufacturer, observed:

“When a T-shirt at a traditional retailer is marked down, it looks like a deal to the consumer, but the price (even at discount) often remains grossly inflated compared to production cost — an indication of overpricing to begin with,” Winthrop writes. The fallout goes beyond merely manipulating shoppers into buying stuff:

“When retailers’ profit margins diminish because of these discounts, it feeds into a vicious cycle of cutting costs wherever possible to increase profits and sustain a fundamentally broken business. Where those costs are cut, the consumer suffers, usually by a loss of quality and service.”

As the Black Friday effect snowballs into the future, it's obvious that we’ll be fighting to pay good money for increasingly crappier items sold by underpaid, overworked workers here and abroad.

There are many, many valid and justifiable reasons for saving money in stores. But it seems as though stampeding over each other and making national news for all the wrong reasons is what our system has foisted upon us. Given the reality of Black Friday, we'd do well to ask ourselves and the leaders of our consumer culture whether it's seriously worth the indignity, especially given the prevalence of online retailers. Sadly, for many Americans, trading self-respect for cheap crap -- crap that we’re told we need to literally fight for -- has become a demeaning and ignominious holiday tradition.