Salon's 2015 Gift Guide: All the goodwill toward men you can buy — even for Christian Grey

We're making a list and binge-watching "Mr. Robot" twice—shopping for our fictional faves, both naughty & nice 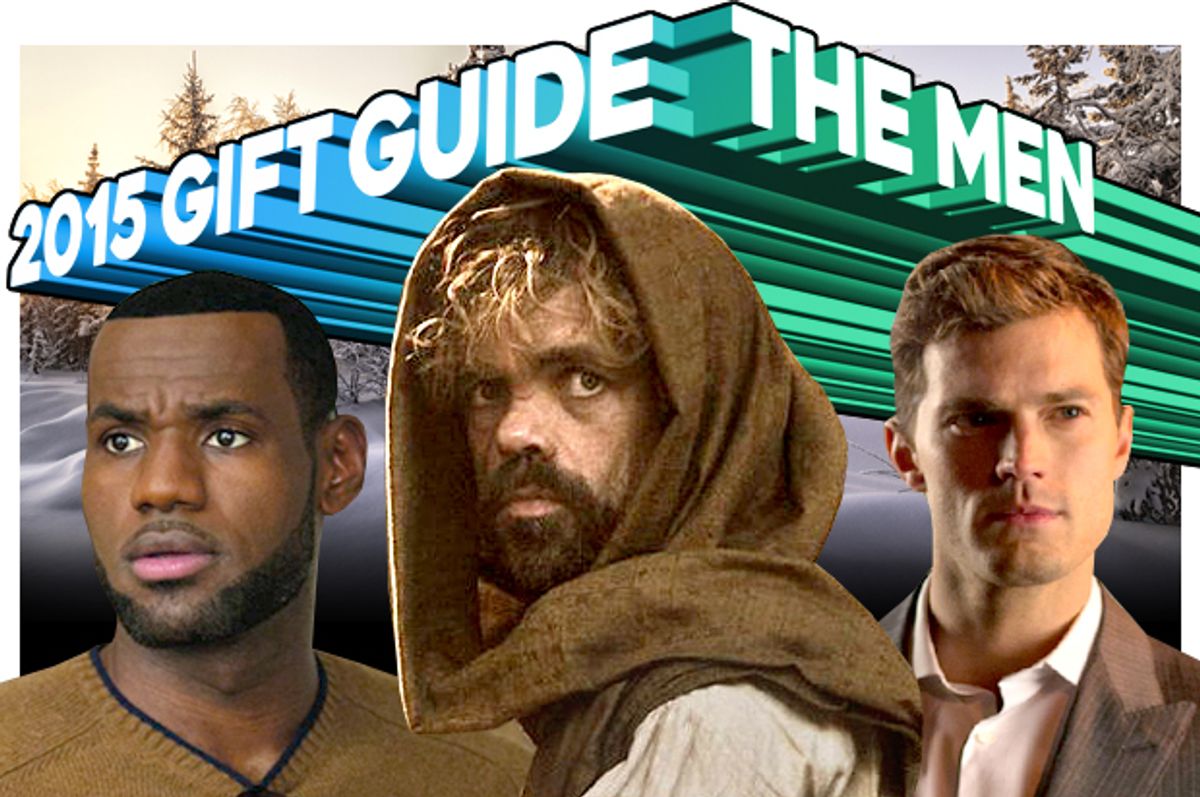 Another Thanksgiving comes and goes, and another frantic shopping season begins. You have nothing in common with your paranoid IT guy or your disapproving dad, probably because you've been binge-watching TV and hiding out in the movies all year instead of making meaningful relationships. That's fine — we've done all the shopping ahead of time for you, whether you're in need of some favorite things for your exuberant partner in crime, your sportsball-playing buddy or the younger brother you've always hated because of his physical differences and the fact that your mother died in childbirth, so it's only a matter of time before you order him executed for treason, but until then you can't exactly show up to family dinner at the castle empty-handed, can you? I mean, the shame of it all — shame!

Looking for gifts for the women in your life, like "American Horror Story" queen bee Countess Elizabeth, or "Unbreakable" Kimmy Schmidt? Right this way ...

A learned man who spends his life floating on dead seas and falling into the clutches of slavers can't very well count on having his library close at hand -- unless, of course, it's on a Kindle Paperwhite ($99.99). A drunk with a penchant for the exotic and a tendency to find himself well beyond the confines of civilization could probably stand to learn to brew his own IPA, which is exactly what the Brooklyn Brew Shop's Beer-making Kit ($34.99) will allow him to do -- as long as he has access to water that isn't filled with Stone Men, that is. "The Lineage and Histories of the Great Houses of the Seven Kingdoms" can tell you who was related to whom in Westeros, but keeping track of how one Lannister is related to another now isn't the easiest of tasks -- or wasn't, before Family Historian 6 ($49.99). The perfect gift for confused relatives and inspired conspirators alike. King's Landing ain't no Winterfell when it comes to the weather -- especially when summers are spent in humid dungeons or human-size boxes -- so why not give Tyrion the gift of comfort with Honeywell's Fresh Breeze Tower Fan ($65.99). Whether he's preparing to defend himself at a trial or plotting to murder his father, his dark nights of the soul won't feel quite so stuffy as the oscillating fan distributes cool air over the entire room and/or shipboard box. How Tyrion's managed to keep his nose this long is a mystery, but it's one worth preserving -- and now he can, with Sports Knight's Nose Guard ($34.95), just what the man who finds himself too frequently in battle needs to keep his nose firmly planted on his face.

Nobody knows Cleveland rocks as much as he does. Give him a membership to the Rock and Roll Hall of Fame ($50) — Billy Joel’s a member. He won’t be able to claim he “forgot” his wallet next time you go to lunch if he’s carrying the Dosh Magic Wallet ($39.95) in eye-catching, can’t-miss-it Cherry Bomb. Make sure he practices even in his off-hours with The Mug With a Hoop ($24) — cereal or marshmallows help him keep his reflexes tight. He’s the best-dressed guy in the league — this etched walnut bowtie ($44.99) is as unexpected as it is dapper. And help him plan his next season with the only manual he’ll need: “A Year In the Life of Downton Abbey: Seasonal Celebrations, Traditions, and Recipes” ($17.99).

Our boy Elliott could do with a little advice; this qualifies as a self-help book ($10.98). "Know thyself" isn't just something pretentious people say when they're belittling him, after all -- they're words to live and die by. Great Northern's Matinee Movie Theater Style Antique Popcorn Machine ($122.99), because Elliott clearly loves his popcorn, and he shouldn't have to take the subway and be mercilessly berated by himself just to have some freshly popped kernels. The official Pixies Lightning hoodie ($36.13) is the perfect attire for those days when he's humming variations of "Where Is My Mind" and wants to be sure everyone catches the reference -- lest people think he has some clue as to its whereabouts. A stylish pair of professional quality Audio-Technica headphones ($189) won't just drown out his best friend's dude-bro boyfriend when he tries to "bond" with Elliott, it'll signal the rest of the world that he'd like them to kindly fuck off, please, as he's got important listening to do. And a copy of the first volume of "Alias" ($13.74) and a subscription to Netflix so he can binge on "Jessica Jones." She hears voices in her head as well sometimes, and it's much cheaper than a well-meaning but wildly ineffective shrink.

He knows he shouldn’t look directly at the Glow Cloud. Help him protect his retinas from supernatural luminescent masses and those lights that appear in the sky over the Arbys with these Gray Zeiss RETROSUPERFUTURE shades ($145). Not that his beautiful hair needs it — Telly the Barber had better not try to cut it again — but Cold Spring Apothecary’s Citrus Rosemary Hair Shine Serum ($28) is like a little bit of science for his head. And don’t let the City Council know, but if he’s going to own a forbidden writing utensil, it might as well be the Kaweco Sport Skyline fountain pen ($26), which doubles as a weapon. Night Vale is the most interesting place he’s ever lived, but the Hog Island Press “Monsters in America Map” ($30) will help him plan his next working vacation. Think he’s always working on science? He can cook you dinner with the Molecule-R Gastronomy Kit ($69) — no evil wheat or wheat byproducts included.

Whether he gets off on the aristocratic tone or uses it to woo “romantic” English majors, Christian will dig this $2,800 first edition of Thomas Hardy’s “Tess.” And while he doesn’t deserve it, he'll love this $154.98 Chateau Pape blend of Sauvignon Blanc and Semillon imported by Kermit Lynch, perhaps the nation’s greatest importer of French wines. He loves Chopin, and one of the greatest interpreters of the moody Pole is Maria Joao Pires — here’s a two-CD selection ($23.46). Sometimes when you're giving a gift, you just have to guess what someone's going to like — especially for someone who plays everything so close to the chest. We have a feeling he’d like Maroon 5's “V” album in red vinyl ($19.98). That's enough tenderness for now, though — Christian is a heartless bastard, the kind of guy who reads “a book by two renowned economists who examine why the poor think and behave the way they do." He’s clearly a maker, not a taker — so why not the “Ayn Rand Box Set” ($19.98)?

Whether he’s breaking into a basement vault or driving the getaway van, Luis will move fast and look good in these Todd Snyder PF Flyers Rambler Hi tops ($160) in brown tumbled nubuck. Who needs a smoothie machine when you have a Ninja Master Prep ($49) blender? It feels weird to be one of the good guys now, but he can visit the dark side when he makes the guys breakfast with this “Star Wars” Death Star waffle maker ($39.99). Help him enjoy a bottle of whatever he had at that last tasting at home with this set of Wooden Wine Glasses ($122) made from black walnut. Fans of Mark Rothko and heists will devour B.A. Shapiro’s new art world mystery novel “The Muralist” ($18), about a young woman working at Christie’s who might have found lost works from great Abstract Expressionists — and solved an even bigger mystery.

He wrote the book on covert operations and shadow governments — and it’s all in his head — but if he wants to feel superior, let him crack open David Talbot’s new book “The Devil’s Chessboard: Allen Dulles, the CIA, and the Rise of America’s Secret Government” ($18.44, hardcover). If he has to ghost, better grab a couple of bottles of the good stuff first — the Château Antoine ’91 and the ’94 du Bellay, of course — in this personalized leather wine satchel ($199.95). Throw in a Château Laguiole Corkscrew in olive wood ($149.95), which doubles as a weapon in a pinch. He has no plans to ever go back to prison, but if he does, he can try to make the chow palatable with “Prison Ramen: Recipes and Stories From Behind Bars” ($7.77) What do you get for the guy who always knows the answer? Amazon’s Echo ($179.99) will never disappoint. It works off voice recognition and it’s always getting smarter — but never as smart as him.

He’ll never forget those parties you used to throw in that first apartment in the Village, but now he only drinks fine Kentucky bourbon. This Pappy Van Winkle signature gift chest ($825) made from reclaimed bourbon barrel wood holds a hand-blown Scottish crystal decanter and glasses from Glencairn Crystal Studio, plus hand-wrapped Nicaraguan cigars. He can write his next instant classic in style on this restored turquoise Smith Corona typewriter that’s been turned into a USB keyboard and iPad stand ($749) — and he’ll never notice if you edit after he’s in bed. He’ll look the part of the distinguished visiting writer in the J.Crew lambswool shawl collar cardigan ($148) in deep navy. He never got good enough to really nail the part of the old king, but he’ll still be fascinated by James Shapiro’s “The Year of Lear: Shakespeare in 1606” ($18.75), which just goes to show that everyone’s in the business of narrative, and how fast everything you think you know can shift out from under your feet. And who thinks they could ever know what a marriage is really about, except the two people in it? The reissue of the original Broadway cast recording of Edward Albee’s “Who’s Afraid of Virginia Woolf?” ($16.98) is all the reminder anyone needs.