Salon's 2015 Gift Guide: Presents for every queen's castle — from a horror story hotel to the Litchfield dorm

We're making a list and binge-watching "Kimmy Schmidt" twice—shopping for our fictional faves, both naughty & nice 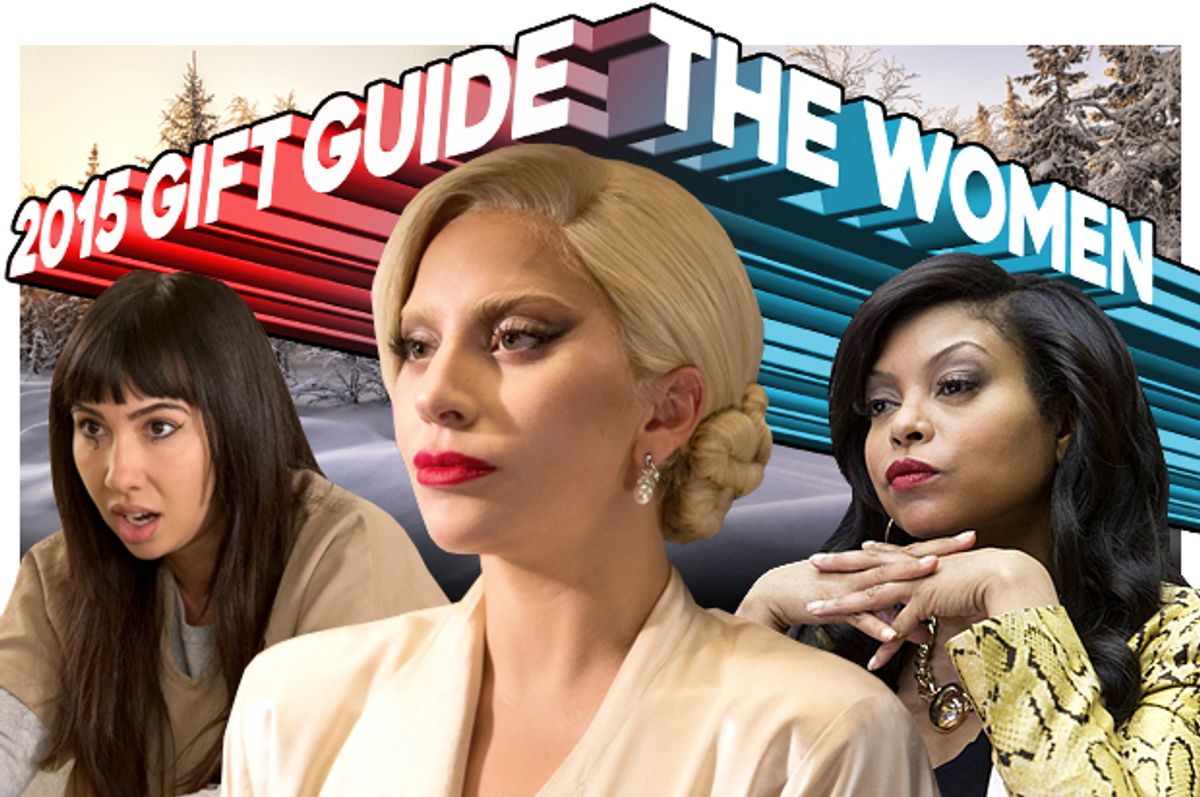 Another Thanksgiving comes and goes, and another frantic shopping season begins. You have nothing in common with your Type-A sister and have no idea what would make your long-suffering roommate happy, probably because you've been binge-watching TV and hiding out in the movies all year instead of making meaningful relationships. That's fine — we've done all the shopping ahead of time for you, whether you're in need of some favorite things for your teenage cousin the prodigy, your Mole Woman neighbor or that scary lady who lives down the hall who once whispered your blood type to you in the elevator who maybe just needs a dose of holiday cheer to help her turn her attitude around, right?

Looking for gifts for the men in your life, like "Game of Thrones" black sheep Tyrion Lannister, or "Mr. Robot" hacktivist Elliot? Right this way ...

Michaela is a Type-A perfectionist, eager to nab the perfect guy, the perfect engagement ring and the perfect legal career. Annalise and the rest of the cast has thrown quite a wrench in her plans, but that doesn’t mean she can’t still look the part. No obsessive perfectionist is complete without a wrist-dinging Apple Watch ($549), but for job interviews and dates, maybe the slightly more subtle but just as obsessive Ringly notification ring in pearly Daydream ($195) goes for a lower profile. Other key items: A sleek and classy blazer for court (BOSS, $745) and this season’s uber-trendy two-tone equestrian boots (Cole Haan, $170). And just to complete that put-together, Ivy-League, effortlessly successful look, Michaela’s fabulously heat-permed hair could always use some more damage control. What about this heat protectant serum from Aveda? ($20)

She kissed you and it felt like a bite. Kat Von D’s Studded Kiss Lipstick set ($57) will freshen her up between guests. Oh, but why bite when you can make a more elegant entrance? This Jonathan Adler brass peacock letter opener ($89) is both stylish and sharp. Then again, she does go through bedding like it’s going out of style — re-stock her with a fresh Italian Hotel Satin Stitch White Sheet set ($289). Make sure she knows you never forget who the queen of this castle is with the Queen Bee Cuff bracelet ($58), and help her keep the good stuff fresh longer with the Savino Wine Saving Carafe ($49) that we’re sure can handle other, stronger drinks as well.

It’s hard to shop for someone in prison, but at the very least, you know they’ll appreciate basically everything. Flaca — the ambitious, teardrop-tattooed inmate in “Orange Is the New Black” who is practically joined at the hip to her best friend Maritza — will enjoy honing her latent grammar skills with this illustrated edition of Strunk & White’s “The Elements of Style,” with art by Maira Kalman ($12 in paperback, $20 in hardcover). After months of using whatever drugstore stuff they have at commissary, she’ll definitely appreciate fancy eyeliner (Yves Saint Laurent, $34) and the ultra hip white lipstick Missy Elliott wore in the just-released “WTF” video (MAC, $15). A new pair of badass Doc Martens ($140) will help to bring her signature look up to date. And for strutting around in those Docs, or perusing Strunk & White in eyeliner, why not a beloved soundtrack? This complete box set of her favorite band, The Smiths (about $90 on CD, and $300 on vinyl) will do the trick.

You can take the girl out of the moors, but you can’t take the moors out of the girl. Update her dramatic cloak with this sleek 3x1 NYC cape in Japanese denim ($395) — you can get her out of the corset and into some jeans later. This Regina hand-carved sardonyx shell cameo ring ($2,750) set in 14kt gold on a white agate band will put every girl she meets on notice as to who the queen of the manor house is. The real family stones have paid for themselves many times over, but she can keep this Ice Queen collar necklace ($58). And while she could probably teach literary supernatural fiction pioneer Angela Carter a thing or two about rooms you don’t go into and houses you can’t leave, this 75th anniversary edition of “The Bloody Chamber and Other Stories” ($11.40) will give you two plenty to discuss over dinner. She’s always fussing around with her medicinal infusions, so pair this Gin Bootleg Botanicals Infusion kit ($34) with Emily Han’s new manual “Wild Drinks & Cocktails: Handcrafted Squashes, Shrubs, Switchels, Tonics, and Infusions to Mix at Home” ($15.76) — but whatever you do, don’t drink her special tonics.

She’s a gutsy, curious problem-solver who won’t let shadowy forces beyond her control stop her. She’ll be inspired by Gwenda Bond’s “Fallout” ($12), the first novel in her series about Superman’s Lois Lane as a high school journalist out to uncover the truth behind a creepy mind control experiment. It’s not quite a jetpack, but she’ll feel a little futuristic cruising around on her HoverBoard smart balancing skateboard ($314). She can test her persuasive skills on a small robot first — her own programmable Ozobot ($59) — and make plans for the future on Apple’s powerful new iPad Pro (from $799). And if this ICE Orb Floating Bluetooth Speaker ($149.99) doesn’t look like it came from the future, what does?

What do you get for the woman who has everything? (Literally — everything!) Cookie Lyon is the fierce, scheming, boss bitch of “Empire,” and she gets or takes what she wants. But with a new record label under her wing, Cookie’s doing more producing than ever. These white leather headphones ($1,200) — a collaboration between Fendi and Beats By Dre — are the perfect accessory for a nascent label mogul. This limited-edition gold-plated turntable would also make for a hell of a recording studio (Mix Foundation, price on request). Given how much trouble Cookie gets into — and seeing as how it would be better if she didn’t, you know, go back to jail for murder anytime soon — some blinged-out pepper spray (Bling Sting, $22) would make for a useful, non-lethal accessory. Once she can take care of her own security, this GPS tracking system for stray children (PocketFinder, $130 + plan) will come in handy for any errant hip-hop superstars she can’t find right now, which is to say, mostly her son Hakeem. But look, not everything Cookie gets needs to be all that practical. What about a gold alligator-skin purse that costs as much as a middle-class income? (Louis Vuitton, $55,000)

Cathy stopped keeping booze in the flat a while ago, and can you blame her? A Sodastream fountain jet home soda maker ($74.99) will keep her in fizzy water, at least. Things tend to get a bit untidy when you’re home, so keep her stocked in organic cleaning products by Honest Company — the Citrus Rosemary Floor Cleaner ($13.99) and powerful Stain Remover Spray ($14.15) and her weekend morning cleaning campaigns will be blissfully nontoxic. Of course she’s not the type to get wasted and text her ex a hundred times in one night, so she can be trusted with a Bedside Smart Phone Vase ($32), a stylish way to keep her phone charged and her bedroom bright, along with this woodbock floral quilt from Anthropologie ($198). And of course you plan to start going to the gym with her -- but until then, she can have the BKR water bottle ($35) in Detox (just a little joke between friends).

Kimmy had a cellphone, obvs, but she lost it at the zoo, and she deserves a new non-Kimmy’s Work Phone, too. The Apple iPhone 6S (from $649) -- motto, “The only thing that’s changed is everything” -- seems particularly apropos. Her light-up sneakers are cute, sure, but maybe it’s time she upgraded to something a little less junior high? Fluevog’s Gorgeous pink and black maryjane heels ($299) are both whimsical and practical. But when she needs to get in touch with her inner strength, these Wonder Woman knee-socks ($2) even come with capes. She didn’t escape the bunker just to eat her Frosted Maniax cereal out of a regular vessel — Elwood the Unicorn Cereal Bowl ($38) makes every meal feel like candy for dinner, and will always remind her of Cyndee. And even though there’s no need for imaginary tennis games anymore, the card game Exploding Kittens: A Card Game About Kittens and Explosions and Sometimes Goats ($20) feels like just her style.