Stop hating on Christmas music: The only thing more predictable than yet another Wham! cover is the backlash

Holiday music is the best part of the celebration — don't have to buy, sell, eat or untangle anything to enjoy it 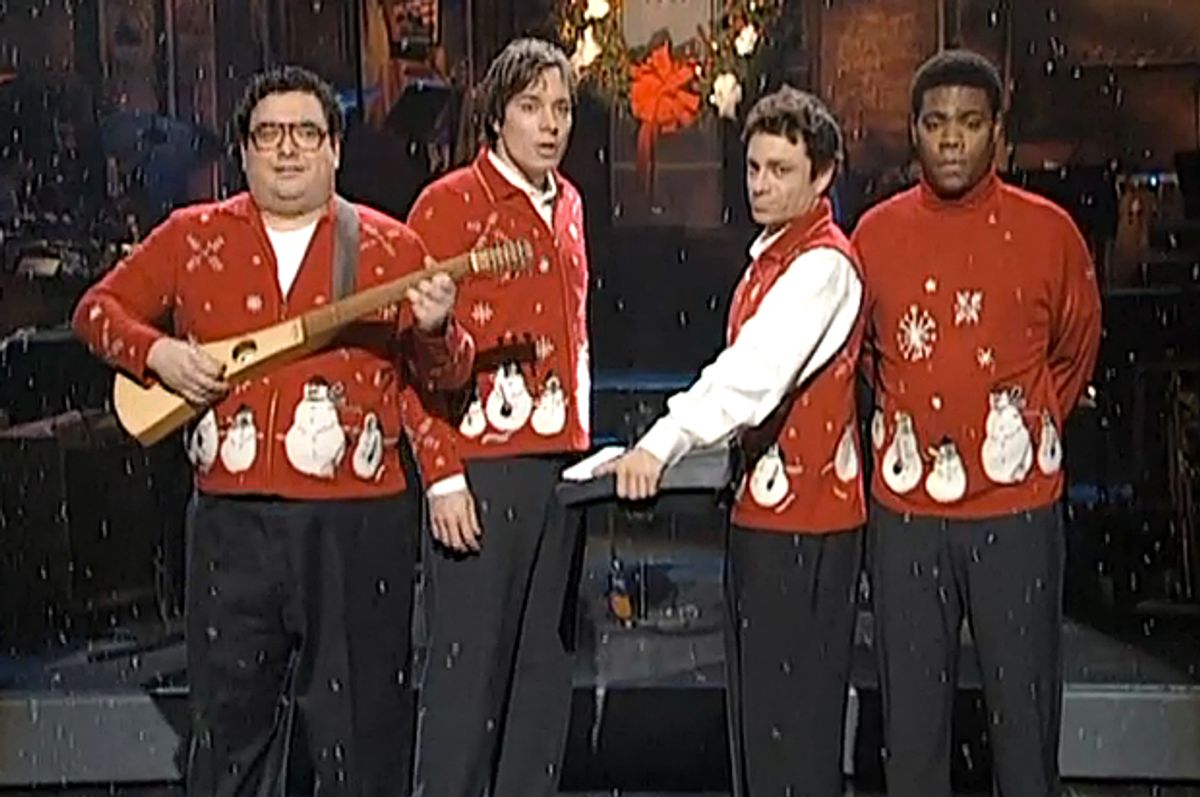 The holiday season encroaches on consumer life earlier and earlier every year. Halloween candy appears in stores when back to school gear is barely gone. Christmas decorations and fixings arrive on shelves well before Thanksgiving. Even the post-Thanksgiving Black Friday sales have started rolling out well before the actual day--especially this year, when deals popped up while turkeys were still thawing in the fridge. Naturally, this parallel eagerness to extend the holiday season and make it arrive sooner has drawn a rather fierce backlash.

In fact, complaining about the premature festive onslaught has itself become a seasonal tradition. Some prefer to take a gently mocking tone toward this early cheer: In mid-November, vlogger celebrities the Murray family released a charming parody of OneRepublic's song "Apologize" with the phrase "It's too soon for Christmastime" subbed in for the actual lyrics. Others don't feel quite so benevolent, however: When a Richmond, Virginia, radio station flipped to holiday music in early October, listeners had vehement, polarized reactions. "Really? Might as well just play it all year round," said one Facebook commenter. "I just removed this station from my choice buttons. Just like retailers, it is horrible to push this on us." Another shared this anger: "Seriously? We loved listening to you at work. Well, not anymore."

While a constant loop of holiday classics would get old if played for months on end, the anger toward this music's arrival is somewhat ridiculous. (First and foremost because nobody's being forced to dial up a specific radio station and listen to seasonal tunes.) Although some songs haven't aged well--looking at you, problematic "Baby, It's Cold Outside" and your creepy, inappropriately pressuring protagonist, as well as the well-meaning-but-kinda-patronizing "Do They Know It's Christmas?"--it's not like this music is the kind that generally provokes negativity or promotes unwholesome ideals. Anecdotally, it's downright impossible not to crack a smile every time the beginning of Mariah Carey's unstoppable "All I Want for Christmas Is You" starts twinkling, or when Shane MacGowan sets up a great bar story by croaking, "It was Christmas Eve, babe, in the drunk tank…"

At its core, secular holiday music is calibrated to invoke comforting flashbulb memories of family, romantic love and the idea of home. Burl Ives calls it "the best time of the year," a period driven by conviviality and communion, and he's right: It's music driven by possibility, where hope springs eternal and optimism stirs. The frazzled solo shopper of the Waitresses' "Christmas Wrapping," after all, has a meet-cute with a long-term crush while buying cranberries, of all things. Perhaps more tellingly, even songs with lurking melancholy buck up and stay upbeat. The Carpenters' gauzy AM Gold staple "Merry Christmas Darling" longs for a faraway love, who may or may not reciprocate those feelings; still, Karen Carpenter wishes him well--and throws in a "Happy New Year, too" for good measure. And the protagonist of Wham!'s "Last Christmas," who experienced post-holiday heartbreak last year, believes that his heart will be treated much more kindly this year.

On some level, this positive outlook stems from the fact that the holidays coincide with the end of a year, an impending calendar flip. It's a time to reassess, to dive into what went right--and what went wrong--in the past 12 months, and look ahead to better things. In the case of religious holiday music, the themes of rebirth running through the songs have slightly different origins, of course. Yet songs such as "Do You Hear What I Hear?" and "Little Drummer Boy" have also become mainstream staples because of their celebratory vibe, the sheer joy present because of the birth of a sacred being. (That some superstars have also tackled these two songs has also helped, of course--it's tough to argue with the talents of the late Whitney Houston and the pairing of Bing Crosby and David Bowie, respectively.)

But in general, holiday music is all about keeping things simple. Unlike December's retail madness, the music is divorced from commercial machinations and chaos; it's about slowing down and homing in on what matters. In this way, seasonal tunes have an almost childlike outlook. Whimsy and imagination are encouraged, from the misfit-made-good tales "Rudolph the Red-Nosed Reindeer" and "Frosty the Snowman" to the rollicking duo of "Santa Claus Is Comin' to Town" and "I Saw Mommy Kissing Santa Claus." Even the holiday's evil creatures are treated with playground-like disdain: After all, there's no greater insult than to describe a grinch-like person with the sing-songy adjectives "stink, stank, stunk!" There's a protective bubble around holiday music to preserve its innocence, to keep out the disillusionment and reality checks of adulthood.

Still, holiday music isn't just sentimental fluff. The pain associated with insurmountable long distances is an incredibly common trope. The Pretenders' "2000 Miles" acknowledges an acute absence, while the equally longing "I'll Be Home for Christmas," whose sad twist is often overlooked, does too. Both songs don't sugarcoat their situations: There's not going to be a happy surprise reunion on a frosty cold morning. Yet again, there's personal pride built into each of these songs; the main characters aren't lonely hearts.

Of course, the holidays are certainly a painful time for many, so having a distaste for the music of the season is understandable--it's an inescapable reminder of heartache and grief, and what's missing rather than what's present. Honoring this perspective is important, because it's no less valid than anyone who finds nothing but happiness in these tunes. And it's gratifying to see how many different ways this holiday music can provide. Chris Butler, the songwriter responsible for "Christmas Wrapping," promised to donate $250 to the Akron Public Library's children's section this year, in the name of the first person to hear the song after noon on Thanksgiving. This isn't a new thing, either: Butler says on Facebook that he does the same thing annually.

With a gesture like this, it's tough to take a cynical view toward holiday music, both its existence and what it represents. It's the chance to be a little cheesy and vulnerable, to disappear into an idealized version of life where the snow is pristine and beautiful outside, and the hot chocolate inside is always warm. And so the return of Mannheim Steamroller and Trans-Siberian Orchestra is a cause for jubilation, not a scornful eyeroll. No matter what the timeline, the return of holiday music is like old friends you rarely see dropping by for a visit, or the chance to enjoy the occasional decadent dessert. It's guilt-free indulgence, decked to the nines with festive glee.