The Black Friday safety tip you need to know

Before heading to the mall or getting in line, make sure you review this. It could make all the difference 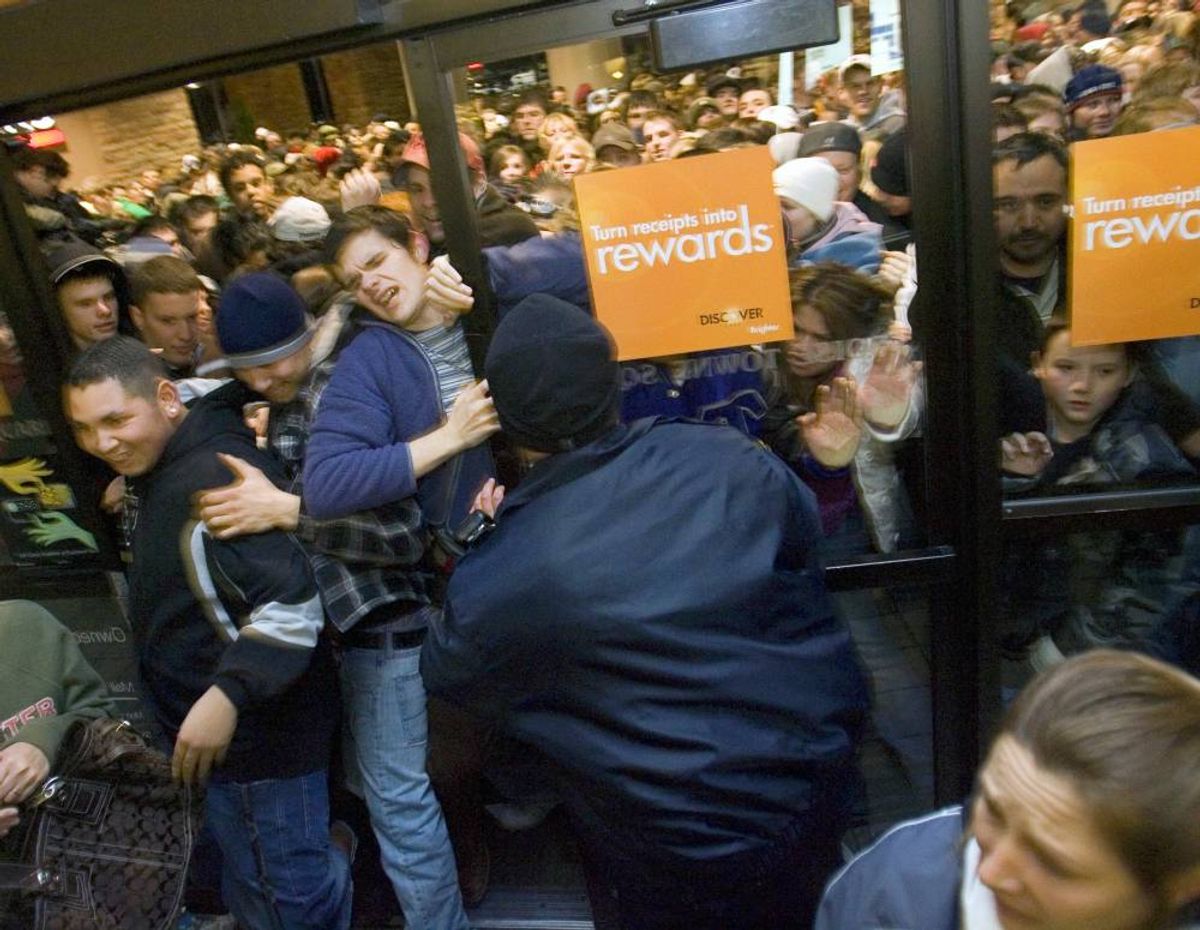 Eager shoppers push through the front doors of the Boise Townsquare mall as they are opened at 1 a.m. Friday in Boise. (Darin Oswald)
--

Black Friday is a day people either love or loathe, eliciting either excitement about great deals or smug superiority about the lemmings who seek them out. Inevitably, the evening news will show clips of shoppers stampeding for half-price televisions or this year’s hot toy as well as lots of armchair psychologists talking about “mass panic” and cautioning you to watch out for the mindless, greedy and aggressive shoppers who have no problem walking over you to get to the brand-new Must Have Item. (There is even a “Black Friday Death Count” website.) But there is a lot of misunderstanding and misinformation about the real causes of what are so often referred to as (to the dismay of social and psychological researchers everywhere) “human stampedes.”

Most crowds are not violent, nor are they mindless or irrational, but the vision of mass panic is what I was expecting when I showed up to work my first Black Friday, a ball of nerves at Best Buy at age 16. As the doors opened and the waves of shoppers burst through I felt my palms sweat and paced back and forth until the first customer was ready to check out. The slow trickle eventually turned into a line of customers stretching from my little booth all the way to the back of the store.

For hours I punched away at my register, smiled and welcomed everyone into my tiny square. Each time there was a pause I would lift my head and look at the masses behind the counter, some with eyes darting from register to register in an attempt to figure out which line was moving the fastest. But despite the occasional grumble and audible sigh when someone took out a checkbook, everyone was incredibly patient, and even understanding. There was an energy and excitement in the air. Masses of people gathered in the same place never fails to induce a sense of awe, even if it is in the pursuit of consumer goods.

That day, and every Black Friday thereafter, I witnessed this coming together. Shoppers knew that this was going to be a busy day, and that everyone was in the same boat. They all recognized that they were one among many just like them, thus creating a kind of unity. Their fate was tied to the fate of the person in front of them, and the person in front of that person and so on.

This is the ideal in a large crowd: everyone opting to share in this social identity as “Black Friday shopper.” Crowd scientists refer to this as self-categorization, a type of social unity that typically occurs at religious festivals, music concerts, political protests and even riots. It is also the kind of coming together observed during times of trauma, for example after bombings or natural disasters.

But not every Black Friday is as calm and seamless as mine was. Sometimes disaster does strike, as was the case in the often cited 2008 death of temporary Wal-Mart employee Jdimytai Damour, who was crushed when the sliding glass doors burst from their frames and the crowd surged forward, trapping Mr. Damour underneath.

While some crowd disasters are caused by disruptive behavior, or the aggressive shopper who refuses to wait for his/her turn, for the most part the crowd is not to blame at all, and that renegade shopper is the exception, not the norm.

Mr. Damour’s death at Wal-Mart in 2008 is an example of progressive crowd collapse. Crowd collapse occurs when someone in the front falls or slips and there is not enough room for those behind to reposition, typically when there are more than six people per square meter. At this density we are no longer agents of our movement but rather moving at the will of those at the very back of the crowd. Too far away to know what is happening at the front, they may assume the forward momentum is a sign of movement, a sign to proceed (this is reported to be the case in the death of Mr. Damour). Those in the front fall on top of each other, creating an ever-increasing pile of humans, leaving those at the bottom crushed or asphyxiated.

It’s not always a collapse that causes deaths and injuries. Sometimes everyone can remain upright and still get crushed. With pressure mounting on every side we can be suffocated as our lungs struggle to take in even the smallest gasp of air. This is called compressional asphyxia and can happen, for example, when an escalator continues to deliver shoppers to an already overcrowded complex, resulting in a wave of pressure with nowhere to go but in.

However, to call these human stampedes resulting from mass hysteria, or mass panic, is misguided. The word "stampede" implies intent, as though individuals are intentionally running over and crushing others in pursuit of their own good. In fact, research shows that even in times of disaster, individuals in the crowd continue to help each other, even if it means putting themselves in danger.

Additionally, using words like “stampede” “hysteria” and “panic” is not doing anyone any good, and is fueling a fight against the wrong target, which should be the venue and event organizers (Wal-Mart has finally stopped fighting the $7,000 fine filed by OSHA). As leading crowd researcher Edwin Galea notes, disasters like these are completely predictable, and most importantly, preventable. Crowd scientists have developed and tested solutions, solutions that when implemented work really well -- for example, the action plan written by John Fruin from CrowdSafe and made publicly available that details steps for effective crowd management. Sadly, not all venues or companies adopt them.

So, stop blaming the mindless mob, and remember that most people do want to be kind, compassionate and generous. We really do better together.

And if you’re venturing out this Black Friday, here’s some advice: