Growing up, everyone thought they could "fix" my hair. I believed them, and paid the price. 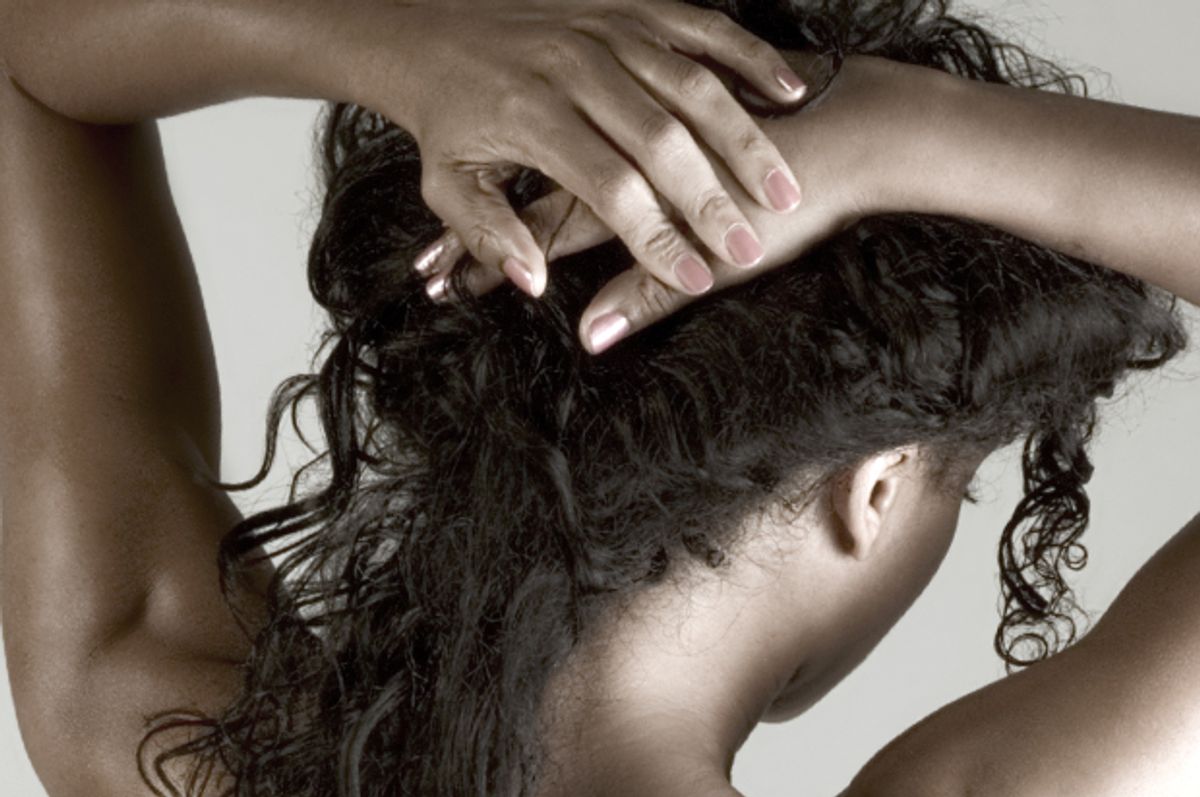 I was 16 and had been in the bathroom for two hours working on my hair. My tools were scattered all over the sink: a brush with bent-up bristles, a dozen barrettes and ties clogged with clumps of my torn-out hair, a spray bottle of water, loads of leave-in conditioner, and various gels and serums for “damaged” hair with names like Frizz Be Gone.

That month’s Seventeen magazine lay open to a tutorial on creating an “effortless” up-do, modeled by a cheerful blonde, but what I saw in the small mirror hanging on a nail above the sink was an ungainly afro whose tight, wiry, dark brown curls had been ripped apart. My eyes were red from crying and my skinny arms were exhausted from being held above my head so long.

I shoved the butt of my hand into the mirror—it went pop as shards of glass fell into the sink and a thin stream of blood ran down my forearm. I got myself a Band-aid, cleaned up quietly, pulled my hair back into a low bun, and retreated to my room. If I left my hair in that bun long enough, it might be semi-straight when I took it out, so long as it never got wet again, but that wasn’t feasible. When I started growing my hair out around age 8, I didn’t realize I had to de-tangle it daily in the shower, so one morning I woke up with fat dreadlocks and had to get them cut out.

Lying there on my bed, I struggled to understand why the images in Seventeen were so out of reach. I was thin like those girls (though maybe my butt was too big); I had a light complexion, just a healthy summer tan; a petite nose; acceptable brown eyes -- but my hair just refused to cooperate. I couldn’t even smooth the baby hairs framing my face and I was perpetually on the verge of having sideburns.

Growing up in rural Texas, none of my friends had hair like mine. I had white and Mexican friends whose stick-straight hair was forever soft and shiny, the kind of hair that reflected sunlight and undulated in the wind. I was only vaguely aware of this as a child, but in middle school I couldn’t ignore it.

Middle school saw seemingly color-blind children morph into image-obsessed pre-teens who were just beginning to perceive racial differences, and I knew that my hair made me one of the least popular girls in school. The blonde girls yelled out that I had nasty pubic hair on my head, and tried to rip it out of my scalp. I yanked theirs back, but it mostly just slipped through my fingers because it was so silky. I got picked last for softball and girls pushed me onto the ground for fun.

I had a couple of black friends from Austin, and while they welcomed me, I didn’t have dark skin and I was keenly afraid of pretending to be black. By the time I was old enough to learn what a weave and extensions were, I figured that wasn’t for me; that was for black women. My mother was black (light-skinned), my father white, but my mother always wore her natural hair very short and we didn’t talk much about girly stuff like hair.

In high school, the social stakes went up again, and there was no question that teenagers understood racial differences, and understood that the blonde Dallas Cowboys cheerleaders set the standard of beauty. At this stage, teenagers were falling in love and experimenting with sex, and because I’d still acquired no experience in this area, I felt more comfortable remaining ugly rather than competing with the popular girls. When I did try to compete, for example asking my crush-of-the-moment, usually a white boy, to hang out sometime, he’d often say no.

Teenagers more and more called me brillo-head, rat’s nest, Medusa (who was by definition a monster), Don King (stripping me of my femininity), or Scary Spice (regarded among my white friends as the ugly Spice Girl — no accident she was also the black one). I had been called “scary” and “dirty” so many times I started preemptively calling myself mutt, or half-breed, or Sideshow Bob, to take ownership of the joke instead of being a victim.

Senior year I took the bus down to Mexico over spring break with a couple of Latina girls and one set of their parents. That first night in Guanajuato, the girls and I were dressing up to go dancing, and as I drowned my little black dress in floral body spray, the girls handed me a bottle of mousse. I’d never used mousse before, but my usual products were so unreliable, I figured why not try it.

I drenched my hair in the sink and applied an enormous handful of the foamy stuff, and once it dried, I was astounded to see my curls looking bouncy and shiny. They were still dark, tight, voluminous, and dry (now crunchy from all that product), but it looked like hair that actually belonged on my head. And seemingly, the girls believed I was pretty, maybe because they weren’t white and had a broader perspective on beauty, maybe because we were in Mexico where American standards didn’t necessarily apply, maybe because I’d gained a little self-confidence. That night at the club, Mexican boys were buying us roses left and right, and for once, I felt included.

That summer, I was excited to start college in upstate New York; I’d been told that both the school and the state were liberal and welcoming of all kinds. My roommate became a close friend, a blonde belle from South Carolina, and I looked up to her because she was very confident, socially outgoing and far more experienced in sex and relationships than I was — meanwhile, my endless parade of college crushes (usually white guys) had been rejecting me left and right. The belle often snapped at me to stop re-doing my hair over and over in the mirror, but she also let me know that my hair was a gross mess. When I told her one day that I was half black, she whipped around to face me and said “So??” She narrowed her eyes on me and quickly changed the subject. I’d clearly made her uncomfortable, if not angry. I wondered if she was upset that we weren’t on the same “team” anymore, racially speaking.

During grad school in Indiana, I had another white friend who tried to help me with my “rat’s nest” so I could finally attract some men when we went to our favorite bar. When I told her I was half black, she furrowed her brow and asked to see a photo of my mother. When she saw that my mother was brown and “not black-black” as she put it, she told me to get over it, straighten my hair, and dye it blonde. I learned to avoid telling people I was biracial, and I tried to accept being a white woman with a birth defect.

By age 23 I’d graduated and moved to New York, and instead of being the lone Scary Spice, I saw many black and mixed women with my hair. They were hailing a cab in full curly afro, standing in a crowded subway car without worrying if their hair was touching someone, and fluffing up their curls in the reflection of a storefront window. If I spotted one of these women up close, we would inevitably lock eyes and smile, just for a second or two. But even in this multicultural environment, I still had the usual frustrating interactions. More than once a white person claimed that I wasn't half black, and then assigned me a more palatable Jewish identity.

Only white people insisted that I identify as white, while ostracizing me for my racial marker. Only white people claimed that race was a non-issue, while explaining that I’d never be beautiful like them. People of color didn’t do that to me, and they often recognized my roots without asking.

So after living in New York for five years, my 30th birthday on the horizon, I finally decided to openly identify as biracial. I was tired of tiptoeing around the subject to make white people more comfortable. I was tired of the insults, the pressure to look and be white, and feeling like an ugly white girl instead of a strong biracial woman.

The next time a new acquaintance asked me that familiar question “what are you,” I looked her in the eyes and said “I'm half black.” No avoidance, embarrassment, or apology about how half-black people are supposed to look. I started wearing my hair out every day, instead of slicking it back into a crunchy ponytail, and I felt liberated, like I wasn’t hiding a secret anymore. In my love life, I stopped focusing on white men, which I’d been doing subconsciously for so long, and once I started dating more men of color (who wisely never tried to run their fingers through my hair), I felt increasingly at home. As I became more comfortable with my looks and identity, I could see that my new confidence was attracting others.

I eventually made my first trip to one of Manhattan’s salons for multicultural hair. The stylist dove right into my hair in its “natural state” (no conditioner, no product, picked out to full volume) without bewilderment. When referring to the phenomenon that my kind of hair expands and changes throughout the day, she said it “blooms” like a flower, and I beamed. After my cut and style, I walked out into SoHo with some swagger and actually turned a few heads.

Over time, my hair became less about prettiness and more about ancestral pride, in my maternal roots from Jim Crow Mississippi up to Detroit in the Great Migration, in the fact that I feel authentic and free and strong with my natural hair. Now, when white people tell me to straighten my hair and dye it blonde, I say, “My natural hair is not a problem for you to fix.”