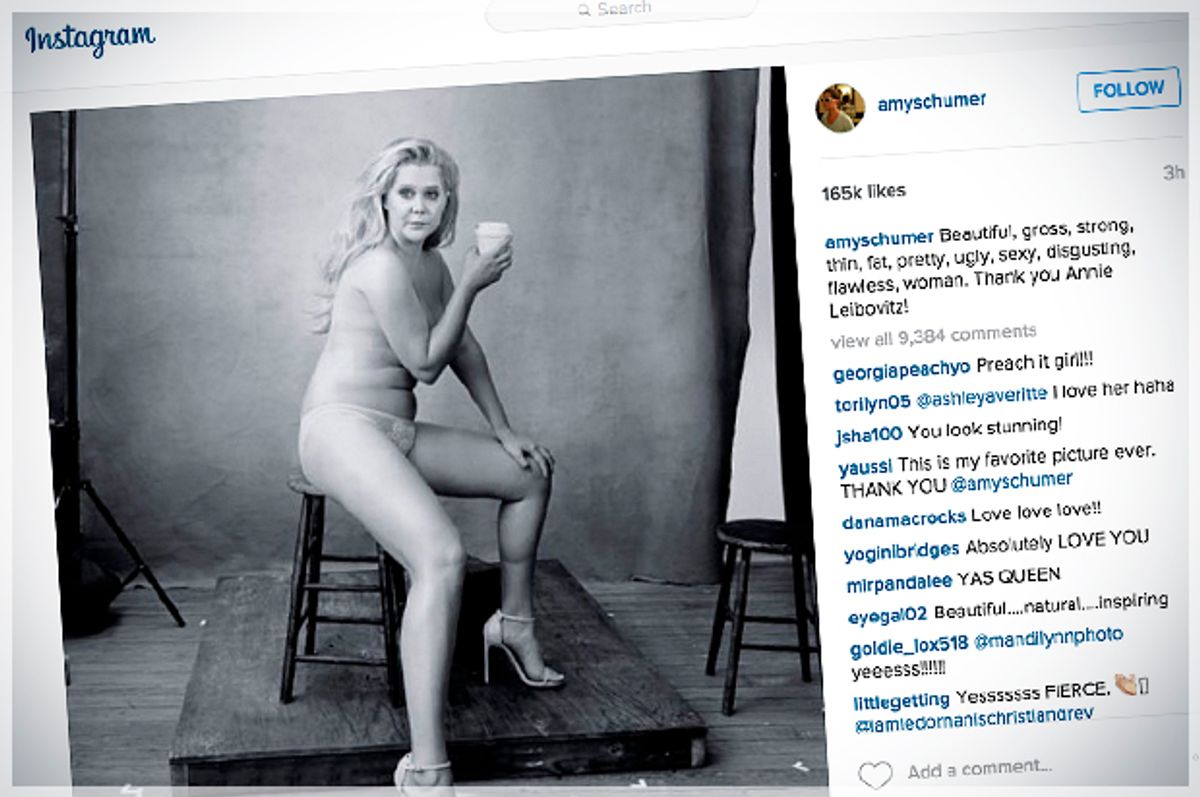 Oh Lord, we have needed this. We needed this like we needed "Jessica Jones" and Jordan Peele and Chelsea Peretti's engagement. In the midst of this week's already heavy docket of rape stories and Planned Parenthood violence, an unlikely reason for feminists to rejoice has emerged — the 2016 Pirelli calendar.

The famed Pirelli tire company's trade calendar has become a hotly anticipated tradition on the scale of the Sports Illustrated swimsuit issue. It's an elusive to obtain treasure (copies are distributed selectively to what the company describes as "V.I.P.’s, musicians, politicians and royalty") and an annual celebration of famous, gorgeous and mostly undressed women shot by legendary  —  and almost always male —photographers. The Pirelli calendar's list of previous women of the month is a Who's Who of bombshells: Gisele Bündchen and Kate Moss, Naomi Campbell and Heidi Klum. Last year's issue was a latex-clad fantasy featuring models like Gigi Hadid and Adriana Lima, shot in Milan by Steven Meisel. Five years ago, the calendar featured the likes of Victoria's Secret's Miranda Kerr, and was shot by edgy lensman and accused serial sexual predator Terry Richardson. Sure, it's also played against type — two years ago it featured a pregnant Adriana Lima and sexagenarian actress Sonia Braga. But the 2016 edition is different. Very different.

Speaking at the calendar's launch event in London on Monday, Leibovitz — who shot a more traditional version of the calendar back in 2000 -- said that even the more revealing photos were not designed strictly for male arousal. She called  Williams' powerful shot "not a nude but a body study" and said of Schumer's "comic" piece: "The idea was that she was the only one who had not got the memo about wearing clothes." And she said, "Pirelli has always given free rein to the photographer, so it’s really about choice of photographer. I think the company has wanted to shift for a few years and my mandate was that they wanted to see some change."

Look, naked and nearly naked women are great. Amy Schumer can take off her clothes and keep them off forever and the world would be a wonderful place for it. The comic, by the way, also  appears in a little more clothing as a naughty St. Pauli girl  for the new GQ. In it, she  runs down a list of the magazine's Men of the Year, cheerfully declaring, "Finally, we're celebrating men!"  and confesses, "Ruth Bader Ginsburg is my bitch. We hang. We crush beers together." Her best one word observation? In response to Bradley Cooper — "anal." But speaking about the Pirelli image, she seemed not at all jokey when she said, "I felt like I never looked more beautiful than I've ever felt in my life, and I felt it looked like me."

If you want traditionally sexy images of ladies, they're all over the place. But just remember that women can be more than pretty things to be drooled over. And if you want to see some stellar examples of their strength and intelligence and wit and courage and talent, as well as their beauty, this year, who'd have thought? Consult a tire maker.