The deadly rage of GOP demagogues: The conservative movement is stoking extremism—and it's making matters much worse

After yet another deadly shooting, this time at a Planned Parenthood, right-wing politicians refuse to let up 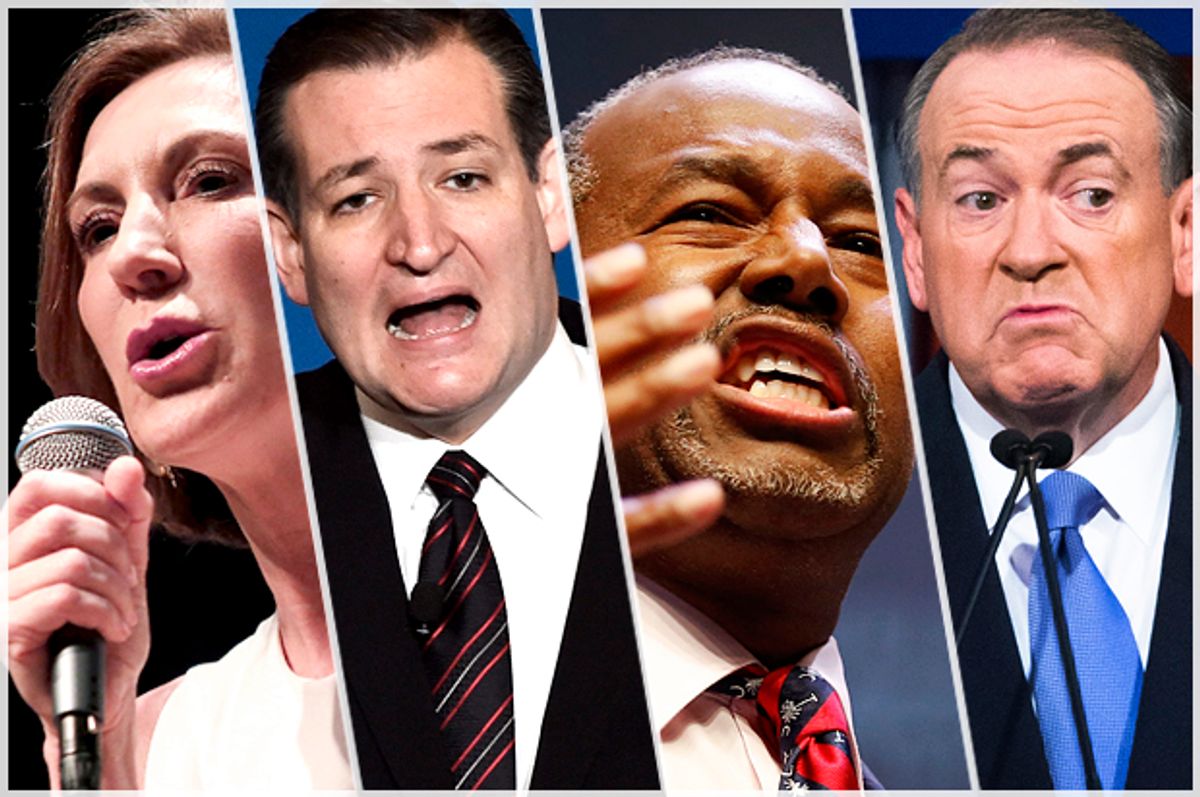 In the wake of the terrorist attacks in Paris, the head of the FBI James Comey made this statement:

"We are not aware of any credible threat here of a Paris-type attack and we have seen no connection at all between the Paris attackers and the United States. The threat here focuses primarily on troubled souls in America who are being inspired or enabled online to do something violent for ISIL. We have stopped a lot of those people this year."

He's been saying this for some time, often using this phrase, "troubled souls," to describe would-be terrorists. He's also frequently used the term "lone wolves," which are usually defined this way:

"A lone wolf or lone-wolf terrorist is someone who commits violent acts in support of some group, movement, or ideology, but who does so alone, outside of any command structure and without material assistance from any group. Although the lone wolf prepares and acts alone, he/she may be influenced or motivated by the ideology and beliefs of an external group."

Here's how Comey described it in an interview with Scott Pelley of "60 Minutes":

"These homegrown violent extremists are troubled souls, who are seeking meaning in some misguided way. And so they come across the propaganda and they become radicalized on their own, sort of independent study, and they're also able to equip themselves with training again through the Internet, and then engage in jihad after emerging from their basement."

All the experts say this is the scenario that keeps them up at night. It's no longer a group of foreign terrorists simultaneously hijacking four jet liners and flying them into skyscrapers and the Pentagon that worries them, it's these lone wolf attacks like the Tsarnaev brothers and their homemade pressure cooker bombs or the man who opened fire on two military installations in Chattanooga, Tenn., killing five servicemen.

There are several approaches to dealing with this problem but it really comes down to a question of whether the government should surveil everyone to find that lone wolf who might become radicalized through exposure to terrorist rhetoric or work through community outreach to try to calm the waters and keep these people from becoming radicalized in the first place. It's a difficult challenge in that the internet allows those with mental and emotional issues to seek out demagogues who are happy to encourage their violent tendencies, focus their anger and give them license to to carry out terrorist acts as a twisted demonstration of deepest moral conscience. Most experts suggest some combination of those approaches stand the best chance of success.

In the case of ISIS, appealing to the decency of the terrorists who are encouraging this behavior is obviously a waste of time. But there are a lot of "troubled souls" in this country who are not Muslim and do not look for meaning from the likes of ISIS terrorists in the Middle East. They look a little closer to home for permission to carry out their violent desires. And there is plenty of inspiration. They don't have to search in the dark corners of the internet or use encryption or travel to a foreign land to meet people who will stoke their violent urges and give them a moral purpose.  They can just tune in to a Republican presidential debate:

Carly Fiorina: I dare Hillary Clinton, Barack Obama to watch these tapes. Watch a fully formed fetus on the table, it’s heart beating, it’s legs kicking while someone says we have to keep it alive to harvest its brain.

Huckabee: It's time that we recognize the Supreme Court is not the supreme being, and we change the policy to be pro-life and protect children instead of rip up their body parts and sell them like they're parts to a Buick.

If some "troubled soul" didn't know better, he might just think he needed to step up to do something serious about what these very important, mainstream presidential candidates are describing as not just criminal, but barbaric behavior on the level of say... ISIS. They are describing gory mayhem that actually goes beyond the radical jihadi's horror show because the depraved Planned Parenthood butchers are alleged to be dismembering children purely for monetary profit.

None of it is true, of course. It has have all been thoroughly Fact Checked and the claims on those doctored videos have been proven false. A few Planned Parenthood facilities provide scientists with fetal tissue for vital and important medical research, with the permission of the woman from whom it's obtained, and the only money that was ever exchanged was for reimbursement of costs. There was no selling of "baby parts." There were no live infants being killed on the table to "harvest their brains." The tissue that was donated to medical research has resulted in important breakthroughs in the hunt for a cure for many life threatening diseases. But that hasn't stopped irresponsible political leaders and anti-abortion zealots from flogging this reprehensible lie in a race to see who can most graphically prove his or her anti-abortion bona fides.

At the time of this writing we don't know for sure that a man who shot a dozen people, killing three, in the Colorado Springs Planned Parenthood clinic this past weekend did what he did as a form of terrorism against abortion providers. Members of the right wing, who are obsessively vigilant in their warnings about radical Islamic terrorism, have been twisting themselves into pretzels for days trying to excuse this event as the simple act of a madman or finding some inane way to suggest that he was actually a bank-robber or a leftwing activist. But let's just say that it's unlikely he hit the Planned Parenthood clinic by coincidence and started babbling about "baby parts" out of the blue.

From what we've seen the accused fits the classic picture of a "lone wolf" -- mentally unstable, susceptible to suggestion, looking for validation. The fact that he is reported to have used the same rhetoric as mainstream politicians should give those politicians some pause. In fact, they should have paused before they cynically dispersed these hoax videos and exploited them for political gain. After all, gory illustrations of dismemberment and mutilation are the propaganda stock in trade of our most hated enemies. They are considered the gold standard for terrorist recruitment. You would think mainstream American politicians would think twice about going down that road.

But they don't. When confronted with this act of terrorism against Planned Parenthood, Carly Fiorina had no regrets. Instead, she lashed out at those who drew the obvious connection between a man who was quoted saying "no more baby parts" and the ghastly term "baby parts" being used by virtually every Republican official and anti-abortion activist on a loop for the past few months:

“It is so typical of the left to begin demonizing the messenger because they don’t agree with your message.”

“So, what I would say to anyone who tries to link this terrible tragedy to anyone who opposes abortion, or opposes the sale of body parts, is this is typical left-wing tactics.”

The threat of ISIS is presented by the right as an existential threat. Dr Ben Carson contends that a Muslim should not be allowed to be president unless he or she disavows the tenets of Islam, and various jurisdictions around the nation have even attempted to ban Sharia law despite no possibility that it would ever be enacted. There is a lot of loose talk about this being a "war of civilizations" which we must win outright or lose everything we hold dear. This is nonsense, of course. Neither the U.S. or Europe are in any danger of being "taken over" by ISIS. We will not be living under Sharia law any time soon and America is not going to become part of the Caliphate.

Unfortunately, in a year or so the country actually could be run by leaders who think using lurid, violent imagery and rhetoric to score cheap points points and inspire "troubled souls" to shoot a dozen people in a woman's health clinic is a perfectly acceptable political tactic. These same people think the answer to the epidemic of gun violence that's killing tens of thousands of our citizens each year is to flood the nation with even more guns. And they are talking about mass deportations, requiring people to register their religion with the government and "doing certain things that were frankly unthinkable a year ago."  This may not amount to a "clash of civilizations" but it's not being paranoid to worry that we might might lose much of what we hold dear if one of them wins the presidency.