You Must Hear This! Banchee's debut album 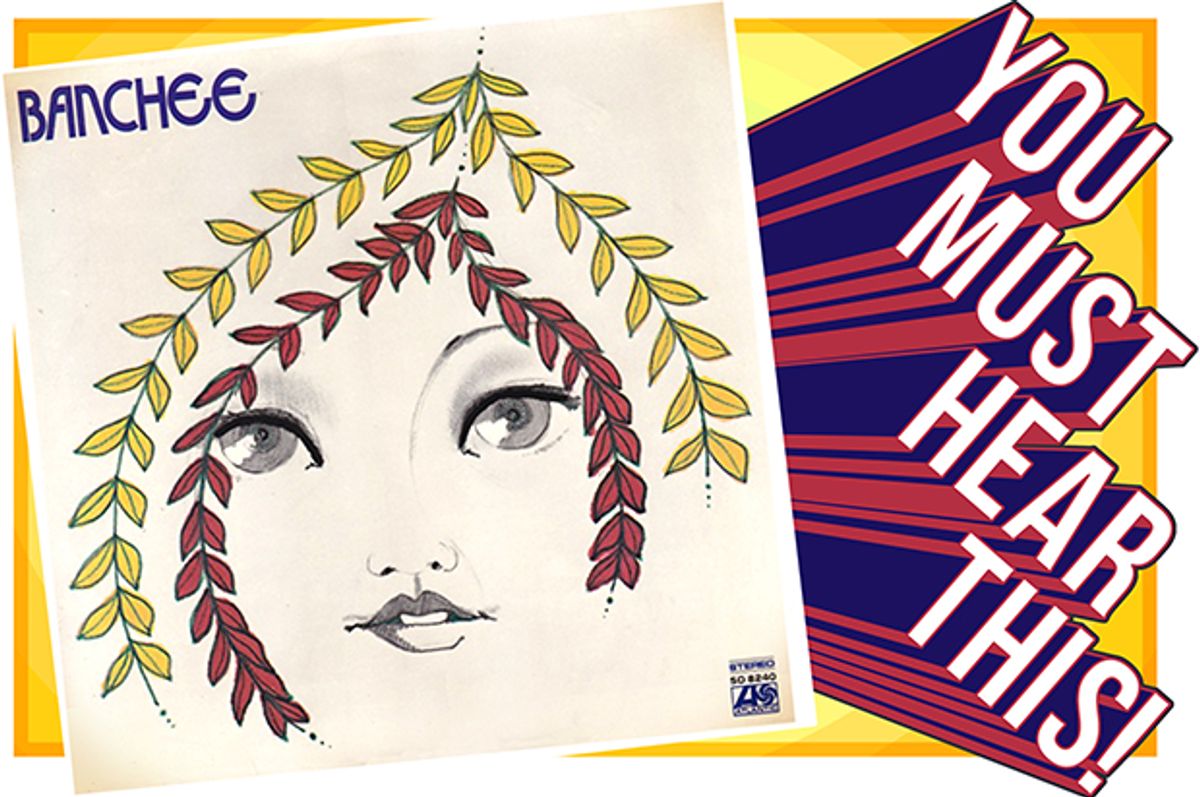 Simply put, Banchee's music was not for everyone. Make no mistake – I love this album. I love the immaculate production, the mad collision of musical styles, and the virtuosic performances. But popular music was then and will probably always be a cruel market – songs that require more than one listen to fully digest face a steep uphill battle.

I heard about Banchee through my old friend Warren Schatz, who just happens to be one of the producers of this album, along with Stephen Schlaks. He told me that he thought, based on this series, that Banchee might just be something I would enjoy. As always, he was right – I was indeed drawn immediately into their dense sonic web. But this isn't an album that will necessarily snare everyone on first listen. It may... or it may take a second or third spin, but at some point it will wrap itself tightly around your amygdala and not let go.

Give them a listen. You will be treated to some of the best guitar playing you will ever hear in the last thirty seconds of this song. And if you are then coaxed into listening to another song, you will be hooked. Banchee.

I spoke to singer Joseph De Jesus and producers Warren Schatz and Stephen Schlaks, separately, on the phone. The following has been edited together from those conversations:

Joseph De Jesus: I was from New York, and I used to go to Washington Square Park on Sundays with my guitar. I used to meet a bunch of fellows, and we would sing harmonies – the doo-wop type of thing. People would gather round on Sundays. It was a big day, a happening we always did.

We formed a band called The People, and we played in the Village. We played all top forty stuff, and then did the circuit around. We were making great money, we had tailor-made suits, we were doing well for that time, but we wanted to do original stuff, so we finished doing the rest of the commitments we had, and went right from there to the Cafe Wha? and went from making all this money to making seven dollars a night and fifteen dollars on the weekend. (laughs)

But we were so happy, because we were doing our own material! We changed the name to Banchee, because Banchee was a word that we threw around to describe a certain ripping type of material. "I've got this Banchee tune!" So we knew what it was – it was a ripper!

Right around that time, [drummer] Victor DiGilio had a friend that had all this money, and he would come down and wine and dine us. He wanted to manage us. So we said, "Yeah, sure, let's go with him!" So that's when everything changed. We went out to Long Island, to Port Jefferson, where this fellow owned a club.

He put up a big sign on the window: Banchee Is Coming. Everyone was going, "Who the hell is Banchee?" And we were practicing all the songs that we had written, and finally we said, "OK, we're ready!" And so the club was packed. Everybody was curious to know who Banchee was!

Stephen Schlaks: I was blown away. The place was really crowded, and they had a light show which was bounced off the wall while the act was playing. Very original at the time – they were projecting slides and all kinds of images, and it really looked great. And it was a perfect fit to this music, which really blew me away because Banchee didn't sound like anybody. They really had a very unique sound, and they were an interesting looking bunch of guys, as I recall. (laughs) De Jesus: We went right from our debut gig right into recording the first album, which was recorded at this place called Associated Studios, where Warren Schatz was the engineer. He was able to get the dead time, which was like from midnight on. So we were like vampires, doing that first album – it was great! We were young, and it was like, "We made it! Somebody really wants to record us!" It's all that energy when you're young.

Warren Schatz: When I first heard them, I thought these guys were at the same level that Yes was at, as far as intricacy. So, it was like, "Oh my god. These guys are so precise with everything. Let's go do it."

It was very easy because they were so well-prepared. They had spent, I don't know – a year or two – rehearsing these songs and getting all these things where they could play all the intricacy like it was music. And that's really hard, because a lot of times you try to do those kinds of records, and it's very stiff because it's not in their muscles yet. And these guys had it. They were just ready.

Note: fans of Grizzly Bear, about two minutes in, this song might catch your ear...

De Jesus (on the complexity of Banchee's music): Yeah, that was one thing that was our strength and our downfall, also. Because it was more like a cult following for us. You know what I mean? Because we weren't really commercial. We had so much brain damage from playing commercial commercial songs, you know – the shake your bootie scene. We wanted to do something artsy fartsy!

Schatz: Most of the production stuff was stupid ideas that Stephen and I had like "let's add chimes here" and "let's add timpani to this one little four-bar section." Little things like that. A lot of times they didn't know what the hell we were talking about, and I said, "well, let's just do it – we'll pay for it, and if you don't like it, we'll take it out!" They were pretty easy. They were pretty stoned half the time, anyway, so...

Schlaks: We used to record in the middle of the night. And they were very perfectionist – everything had to be just right – and Warren was an extreme perfectionist. He was a real wild man. We mixed it forever. Warren mixed and mixed and mixed, and of course a lot of times the members of the group would show up, and it was like a never-ending thing until Warren felt it was so perfect. And he probably heard things that I didn't hear. It really came out great, it was really a great work. It really paid off, but we spent a lot of time on that recording.

De Jesus: The album was released, and it was wonderful. Back then, there was a big music store on Broadway, I think it was Sam Goody. And we're walking down Broadway, and there's our album, in the biggest music store! And then another time I was walking into this store on Eighth Street, and boom! I hear our song playing. It was a wonderful feeling.

But the thing was, we never got a deal with a booking agency. Which was really strange. So we were like a big fish in a little pond, because we were just east coast, and we had our following, and everything was great, but we never toured! We never got out of the east coast. The album went, and it did its thing for the two weeks, and then it went away, and we never had a tour.

Schlaks: I remember, when we finished it, it was a very disappointing thing. Atlantic Records had bought Banchee, and they'd paid the studio – and us as the production team – paid in advance something like fifty thousand dollars. Which was a lot of money in 1969. It's still a pretty good piece of change now! So, we felt that we were on our way. And then, when they released the record, I still have a copy of "Billboard" or "Cashbox," and Atlantic had a whole page with little album covers. They released probably over a hundred albums that week, and it never saw the light of day. They didn't really market it, they just put out a bunch of records.

De Jesus: That first album, we did several shows, it was really fantastic. The first one we did was at Stony Brook University, we opened up for Blood Sweat and Tears. But the best show that we did, the night that was magical – everything was so on... That was the show when we opened up for this band, a really nice band, who was very hot at the time, and the name of that band was Rhinoceros.

We played a show in this big club at the time in the Village called, I believe, the Au-Go-Go. We opened up for Rhinoceros, and it was the best we ever sounded, I think. It showed, because the trade magazines – "Billboard" and "Cashbox" – the reviews were excellent, they were really nice to us. They showed us a lot of love.

Schatz: I listen to it now. It sounds like a record I would want to make today. I think it had to do with the fact that, as a rock band, they didn't feel that they had to play everything loud. It allowed me to get a really pristine recording, and spend time EQing so there were holes for things to live in. Sonically, for me, it's one of the best recorded albums that I ever made.

Joseph De Jesus continues to compose and record original music, in addition to documenting and cataloging his life's work.

Warren Schatz currently resides in New York, where he is Executive VP Operations at Penalty Entertainment, a Hip-Hop label distributed by Sony/RED.

Banchee Music Yes You Must Hear This!