Hello, GMO salmon: Why would anyone want to create a farmed Frankenfish when wild salmon are already the perfect fish?

The FDA has approved AquaBounty Technologies' GMO salmon -- will a label be required? 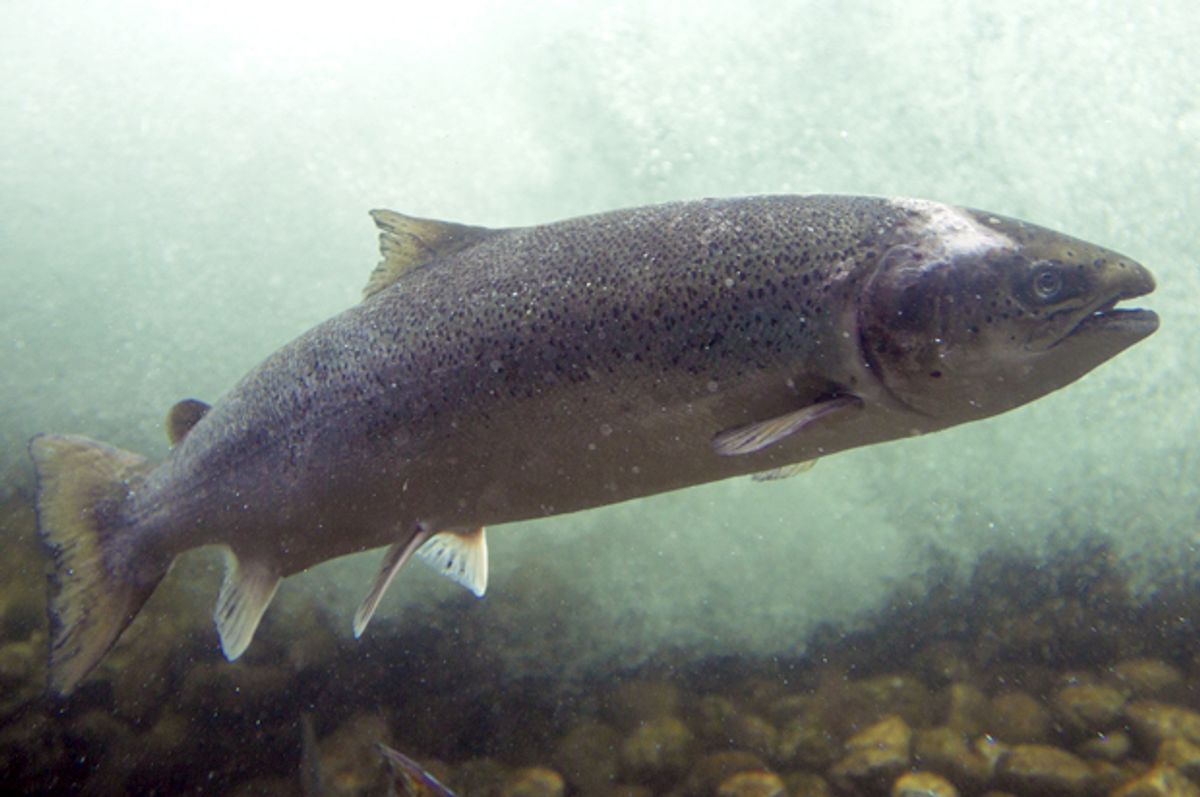 Call me Sam.  I’m on a heroic, Homeric journey that’s taken me down this great river to the sea and then several years in the ocean where I became a voracious predator of krill and shrimp and fellow fish and then unerringly returned as an older and wiser salmon to these my natal waters. I have fought past the nets of death dropped by the hairless apes and up torrential rapids and escaped the talons and claws of eagles and bears, seeing many of my comrades dragged off into the sky. But I’m finally about to get lucky and spawn till I die here upon the river’s pebbly redds from whence my nutrient essence will spread through the forest in the form of bear scat and uneaten remains until every tall tree contains some salmon soul within …

OK, I can see your dorsal fins drooping again, Char. You too, Trout. Look, I’m not saying I’m a better or more aristocratic fish than you, although I am a King salmon. And nothing against Coho or dog salmon but Kings are the largest, most powerful salmonidae on our blue marble planet. We can weigh up to 100 pounds … but hey, whale talk later, gotta shake my tail now that I see my one true love laying eggs on the cool pebbles under that Sitka deadfall and my isn’t she pretty in her rainbow orange red/purple death colors as I approach her glistening eggs, my fishy milt about to be released onto Oww! ...  What the damn dam?

Oh my cod I thought that was a bear but it's more like a Mac truck with fins just ran me over. Hey, you, yeah, softy flesh.  What are you, some kind of giant mutant salmon?

Me no freak of nature, me Genetically Modified Organism but you call me Gomo (trademark). Me have Atlantic and Chinook genes mixed with touch of ugly eel-like ocean pout. It has anti-freeze in blood help me grow fast and start in any weather.

Wait, why would anyone want to create a farmed Frankenfish like you when wild salmon are already the perfect fish? We’re handsome to look at, delicious to eat, full of Omega 3, good brain food for Orcas. I mean we’re the indicator species for healthy rivers, estuaries and a living ocean!

Don’t need those no more, Mr. Natural.  FDA give approval to AquaBounty Technologies to sell me, which make me first genetically engineered animal OK for hairless apes to eat. Me also could end world hunger at just $14.90 a pound. What you looking at me so funny? Pout is fish too. Me 100 percent three species of fish, no glowworm, peanut or crocodile genes added to date.

Actually, I was just wondering why you’re talking like that?

Me grow up watching "Sesame Street" from my rearing tank till big flood come and wash all of identical Me fish out to ocean. We like ocean. We like your river. Now make it our river. Me just miss tasty fish pellets they feed us. Me don’t like eating live food. Me like that girly fish over there, though, lay pretty eggs.

Hey, get your fish eyes off her.  Besides, I thought your hairless ape company said you’d all be females and sterile so even if you escaped you wouldn’t bother us real salmon.

What, you kidding?  You no see "Jurassic Park" on TV?  Original one by Spielberg, not stupid sequels. You make something new it escape and find way to do two things evolution tell us to, eat and breed. Of course evolution never take one species’ genes and splice into another, that take techno smarts. Plus what could go wrong?  Now me got these fish eggs under me and … awww.  That feel good.  Now next generation river salmon grow big and weak like me.

Cod no!  Luckily even hairless apes have to know the difference between real salmon and you giant lab-spawned sci-fish, and given the choice will probably choose us.

Not if FDA no require label who is GMO fish and who is you. Why make public worry? Too many choices confuse hairless apes. Plus me designers say if you don’t control nature it just run wild.  FDA say me perfectly safe grilled over fracked gas and drizzled with rBGH hormone growth butter and side salad grown from patented Monsanto GE seeds. They sterile like me. That joke, my friend. I wink if I had eyelids.

I’ve heard enough.  You are a piscine abomination that would make a hagfish gag. This cannot be allowed to stand, or swim, actually.

Too late, puny nature fish. You no stop me and my lab mates. We grow fast, spread fast. We take over world and make brave new ocean with massive schools of Gomo (trademark). We are future. You wild fish like nostalgia TV, like "Leave It to Beaver" if beaver not also go extinct. We are super master fish of the universe and we soon take your river and, yikes ... What the hake!

Like I was saying before I was interrupted, call me Sam. I’m a gnarly old wild salmon watching the mighty grizzly as she drags an easily distracted and now weakly flapping giant GMO salmon-like fish onto the riverbank. Now she’s eating it alive and, to be fair, the bear seems none the worse for doing so. Still it’s best I get moving. Bears have incredible appetites and … Oh look, another lovely lady-fish laying her eggs over by that nice boulder.

David Helvarg is an author and executive director of Blue Frontier, an ocean conservation group.  His latest book is "Saved by the Sea – Hope, Heartbreak and Wonder in the Blue World."