Not another all-white Oscars: Can “Creed” star Michael B. Jordan win over the academy's aging white male voters? 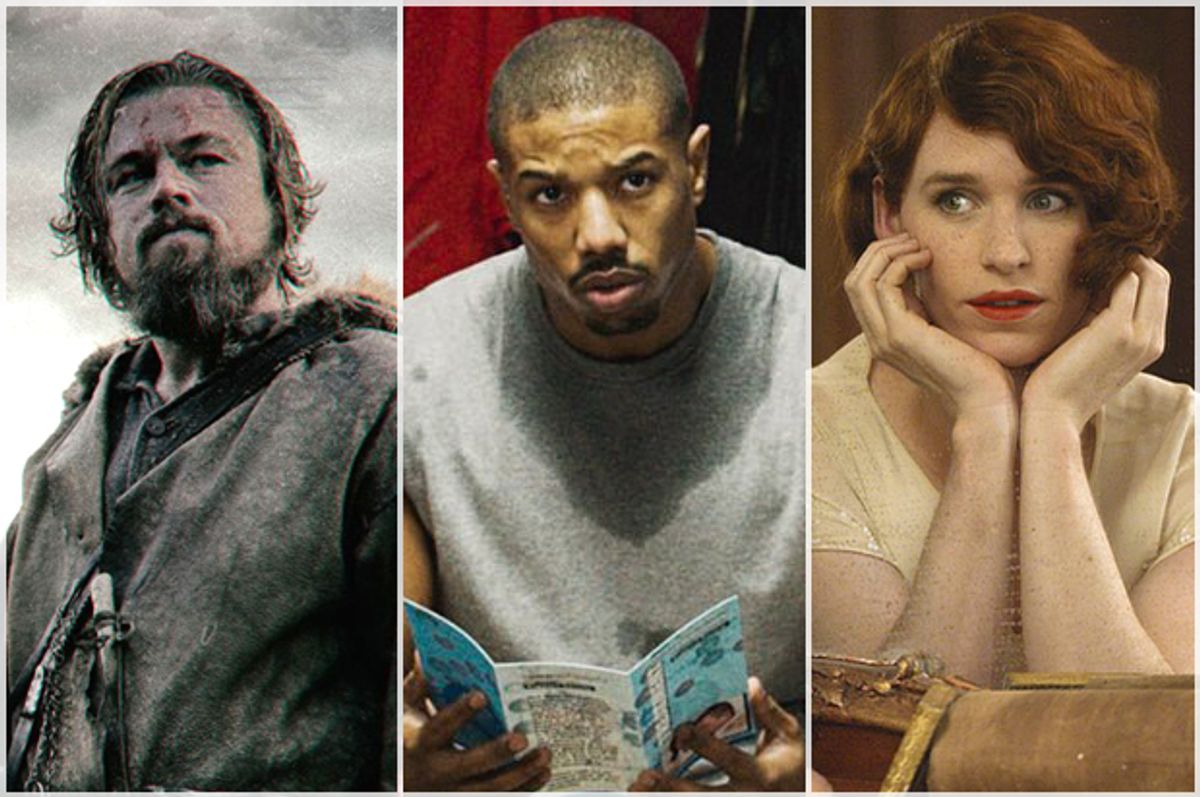 Last year, the #OscarsSoWhite hashtag campaign spotlighted a historic lack of diversity in the Academy Awards nominations pool. Twitter users pointed out the fact that the four major acting categories had absolutely no nominees of color—the least diverse such group since 1995—but this year’s honorees are shaping up to be just as white.

Predicting the Academy Awards might seem like a game of reading tea leaves, but Oscar bloggers have it down to an almost exact science. By this time last year the folks at the Gurus of Gold website correctly predicted all but two of the acting nominees in the four categories. And at the current moment, fellow Oscar site Gold Derby forecasts that just one non-white actor will receive an acting nomination this year: Idris Elba, for his ferocious supporting turn as a warlord in Cary Fukunaga’s "Beasts of No Nation." And it’s looking like even Elba’s name may get scratched off the nomination list.

The actor faces a number of obstacles to receiving his first nod. "Beasts of No Nation," Netflix’s first original film, was considered a major contender until the powerful drama—which drew raves at the Toronto International Film Festival— hugely flopped in its opening weekend in theaters. In its entire run, it’s made an anemic $90,777 at the box office. Although the film, which was simultaneously released in theaters and on Netflix, has fared much better on the streaming site (viewed 3 million times as of Oct. 26), theatrical failure has massively soured "Beasts’" Oscar chances. The British actor was the front-runner in September, before the film’s release. Now he’s in fifth—and falling fast.

In a crowded supporting actor race, there are a number of other contenders looking to take his place on the slate—all of whom are white. In "Love & Mercy," Paul Dano ("Little Miss Sunshine") gave his most acclaimed turn yet as a young Brian Wilson, and just nabbed a trophy at the Gotham Awards for it. Meanwhile, "Room’s" Jacob Tremblay has been hailed as a “revelation” for his performance as a young boy raised in the captivity of a small garden shed. And three years after launching his Oscar comeback with "Silver Linings Playbook," Robert De Niro is gunning for a nomination for another David O. Russell movie—the Jennifer Lawrence-starring "Joy."

But there may prove no bigger hurdle in this year’s Oscar race than Sylvester Stallone, who is launching a huge comeback. In Ryan Coogler’s "Rocky" spinoff, "Creed," Stallone reprises his role as the Philadelphia prizefighter—who comes out of retirement to train his nemesis-turned-friend Apollo Creed’s son, Adonis. The 69-year-old actor gives it everything he’s got, and five decades into Sylvester Stallone’s career, it may just be his chance at gold— the National Board of Review just named him best supporting actor, too. If a scene in which (big spoiler alert) a cancer-stricken Rocky climbs the famous steps of the Philadelphia Art Museum doesn’t get him nominated, then I’ve never seen a movie before.

If Stallone proves the supporting actor race’s fifth lock—after "Spotlight’s" Michael Keaton and Mark Ruffalo, "Bridge of Spies’ "Mark Rylance, and Tom Hardy, who is drawing raves from academy screenings of "The Revenant"—Idris Elba won’t be the only actor of color shut out. "Sicario’s" Benicio Del Toro is an audience favorite and could break into the supporting actor race for his work in Denis Villeneuve’s masterful drug war thriller. His character is so popular that Lionsgate plans to build a sequel around him, but the problem is that Del Toro lacks the big, showy scenes that make Oscar reels. And in the best actor pool, Will Smith appears a probable snub after "Concussion" earned so-so reviews at AFI.

But there’s one bigger factor working against actors of color: the academy itself. Earlier I mentioned that the Gurus were able to predict all but two of last year’s 20 acting nominees: One of the Oscar snubs was "Big Eyes’" Amy Adams, a presumptive (and understandable) bet, considering she’s been nominated five times. The other was David Oyelowo—who looked like he could win the whole thing after his performance as Martin Luther King Jr. earned some of the best reviews of the year. But aside from its best picture bid, "Selma" was shut out of the major categories, with Oyelowo and director Ava DuVernay given the cold shoulder.

Those shocking snubs were the driving force behind #OscarsSoWhite, a conversation that drew attention to the fact that people of color are too often sidelined at the Academy Awards. Of best actor winners, 91 percent are white, and just one woman of color (Halle Berry) has taken top honors in the best actress category in the entire history of the ceremony. And these statistics are a reflection of the academy itself: Although AMPAS has pushed to diversify the voting pool, a 2014 L.A. Times survey showed Oscar voters are primarily old white dudes—93 percent white and 76 percent male—with an average age of 63.

The AMPAS voting body may be slow to change, but this year’s Emmys showed it is possible. The 2015 Emmys boasted the most diverse lineup of nominees in the show’s history—with 18 African-American actors reaping bids. Not only was that number up 64 percent from the previous year, but the ceremony also crowned the first best actress winner in Emmy history: Viola Davis. In her acceptance speech she highlighted the barriers that still exist for actors of color, especially women. “The only thing that separates women of color from anyone else is opportunity,” she said.

As Davis pointed out, the continued curse of #OscarsSoWhite is largely reflective of an industry that creates far too few opportunities for anyone who isn’t white. In a 2015 interview with NBC News, DuVernay said that for people of color, the industry remains “a whole bunch of locked doors,” and the statistics show she’s right. A study from USC Annenberg found that film rarely reflects its audience: While 44 percent of ticketholders are non-white, just 23.6 percent of speaking parts went to people of color in 2013. In movies like "(500) Days of Summer," people of color get less than 30 seconds of speaking time in the whole movie.

The Oscars won’t solve racism in Hollywood, but they should continue to address their own blind spots. Their best chance to do so—and avoid another all-white acting race—may be Michael B. Jordan, star of "Creed." Jordan shines in the title role, playing a young boxer haunted by his father’s legacy, but it’s Sylvester Stallone’s own shadow that looms larger: In 1976, Stallone earned a best actor bid for his iconic performance as Rocky Balboa. Michael B. Jordan, the "Wire" and "Friday Night Lights" alum who broke out two years ago in Coogler’s "Fruitvale Station," will try to replicate that success in a crowded race.

But in doing so, Jordan faces tough competition. Facing off against heavy-hitters like Johnny Depp, Michael Fassbender, Leonardo DiCaprio, Michael Caine and last year’s winner Eddie Redmayne, the odds are more than stacked against the up-and-comer for a best actor statue. If "Creed" is yet another underdog story in the "Rocky" saga, there may be no bigger feat than taking down the Oscars themselves.