The luminous "Transparent" returns early: In the season 2 premiere, the ghost of pre-Hitler Berlin haunts

Season two's premiere, which dropped a week early, tells an extraordinary story of past and present suffering 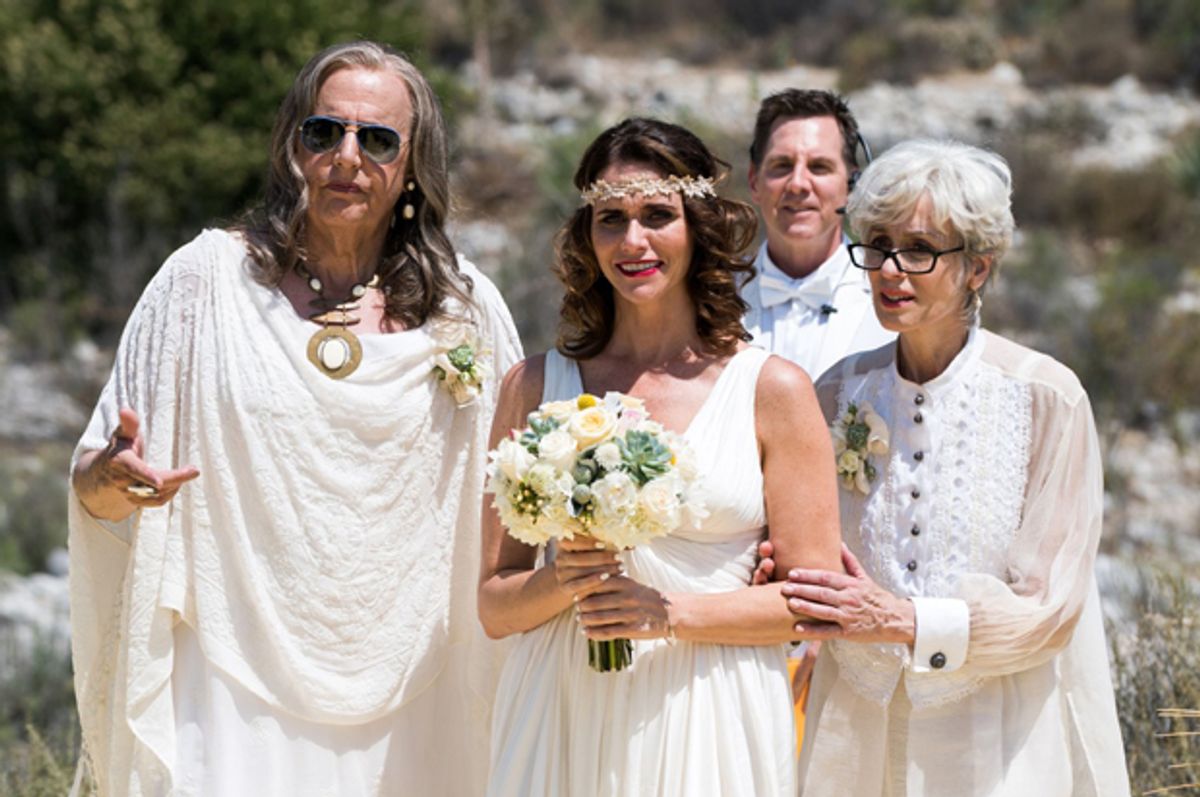 Last night, Amazon Studios abruptly released the second-season premiere of its award-winning series “Transparent” a week early—a business decision that recalls Beyoncé’s surprise midnight album drop more than it recalls anything from the film or television industries. It’s a savvy move for the streaming site. The full-season drop often erases episodic distinctions, lumping a season’s stretch of episodes into a daylong blob. And though bingewatching is some people’s format of choice, it’s a difficult format for good press, on both the PR side and the journalism side. There’s a one- or two-week window for buzz about an hours-long series, and then it languishes in the queue as something newer and hotter emerges, fully formed from the abyss, like Venus from the ocean.

And in the case of “Transparent,” in particular, that would be a real tragedy. Amazon Studios does not make particularly good television, with the exception of “Transparent,” the only show that validates the corporation’s hands-off, auteur-driven, “disruptive” approach to television. “Kina Hora,” the second-season premiere, is an extraordinary half-hour of television, one that is put together even on the most minute levels with care and consideration. It’s sort of like—as, again, with Beyoncé’s full album—the creators and studio execs were so excited by what they had on their hands that they wanted to broadcast it as soon as possible.

What makes “Transparent” season two different from last season—which was itself technically and thematically brilliant—is that creator, writer, and director Jill Soloway introduces a thread of historicity to the story, with flashbacks, of a sort, to 1933 Berlin. It’s more of a dream sequence than historical record, though—almost as if the past is invoked by moments in the present. In “Kina Hora,” the communal, frenzied enthusiasm of the horah, to an ululating live rendition of “Hava Nagila,” segues into a party of drinking, dancing, costumed queer people in 1933. A cousin in 2015 takes center stage in the horah, moved to a seemingly mystical communion with the dance, and that communion reaches out and touches this other party, where that exact same actor is also dancing, albeit in a different costume, to different music. That party is full of boys wearing makeup and girls dancing and drinking; Bradley Whitford, who played Mark/Marcy in season one, is an older, mustachioed German man in the flashback, with owlish spectacles and a well-tailored suit. Those two actors are our first clue: This vision of Berlin is not exactly real, but it’s not entirely imagined, either. It’s a fragment of history that is bearing on—perhaps even existing simultaneously with—the present-day.

And at its center is a currently nameless woman, wearing a sheer green dress and a red cloak, who is in the grip of freewheeling joy. (The character is played by Hari Nef, a trans woman up until now best known for her modeling career.) It would not be fair to tell you more about Nef’s character at this juncture. But it’s immediately clear that she, in 1933, has something in common with Ali Pfefferman (Gaby Hoffman) in 2015. Both are about the same age, and have similar dark hair. Ali’s experimental side-shaved bob is just as eye-catching as the short-banged bob on her doppelganger. And both seem stranded—out of place, and maybe out of time, too. “Kina Hora” reintroduces the audience to the Pfefferman family at oldest daughter Sarah (Amy Landecker)’s wedding to Tammy (Melora Hardin). Everyone is wearing white, except for Ali, who is wearing a white blouse with purple polka dots, and a purple tie to match. And Nef’s character wouldn’t have seemed so alone if it wasn’t for the episode’s final shot, where she appears in 2015, lounging in a balcony chair with her red velvet cloak, looking bored and a little lost.

Two weeks ago I wrote about another Amazon Studios show, “Man In The High Castle,” observing that the show was hitting American audiences during a period in time where Nazism does not seem so distant or exotic. In “Transparent,” it is just around the corner—1933 in Berlin being both a time of incredible cosmopolitanism and also the beginning of something much more awful. It’s the era of “Cabaret” and Christopher Isherwood and “The Artificial Silk Girl”; we have some familiarity with it. But in “Transparent” it has the added weight of being fundamental to the identity of the Pfeffermans, who are all thoroughly Jewish, and many of whom express their gender and sexuality in ways that would have been quickly stamped out in the rise of the Third Reich. “Transparent”’s second season is embarking on a journey of relating both the selfishness and frailty of individual people, as well as the beauty they can participate in and are occasionally capable of. It’s a story that reaches out to reckon with both privilege and pain, and to examine how the past infiltrates the present.

And it is the type of story that can restore one’s faith in humanity, even when it depicts a lot of sadness and suffering. Above all, “Transparent” understands the banality of being human—from the self-absorption of the gossiping Pfeffermans in the first episode, who can’t stop from betraying each other’s secrets, to Sarah’s staccato breakdown, during her wedding, as she realizes she can’t do it—and yet still finds a way to transform it into something beautiful. Soloway is a master of rendering the experience of family to film—overlapping dialogue, sudden moments of joy, and long stretches of boredom all make it through the screen. During the horah, the Pfeffermans all hold each other’s hands, whirling in a circle, both unwilling and unable to let go of each other.

During Sarah’s breakdown in the bathroom at her own wedding reception—that red matte lipstick on Landecker’s face is an open wound—she discovers that though she and Tammy are married in the Jewish faith, Rabbi Raquel (Kathryn Hahn) hasn’t yet filed the paperwork with the city. She’s married in the eyes of God, but not married in the eyes of the state of California. What was all of that, then? Ali responds: “A pageant.” It’s a small moment, but such an important one. Sarah’s red lipstick is echoed on the face of the singer who brings the wedding guests together for “Hava Nagila”; and the exaggerated makeup of both women reflects the costumey makeup of the boys and girls in Berlin. The trappings of identity are both infinitely disposable and infinitely important; the pageantry keeps going, even when the wedding is over. This is the stuff people are made of. All the world’s a stage, or, more recently, life is a cabaret, old chum. And it is time to start dancing.