Let's talk about the penis: From South Korea's Penis Park to the Washington Monument, the phallus is everywhere

History and mythology are rich with phallic symbolism -- and then there's pornography. Here are some highlights 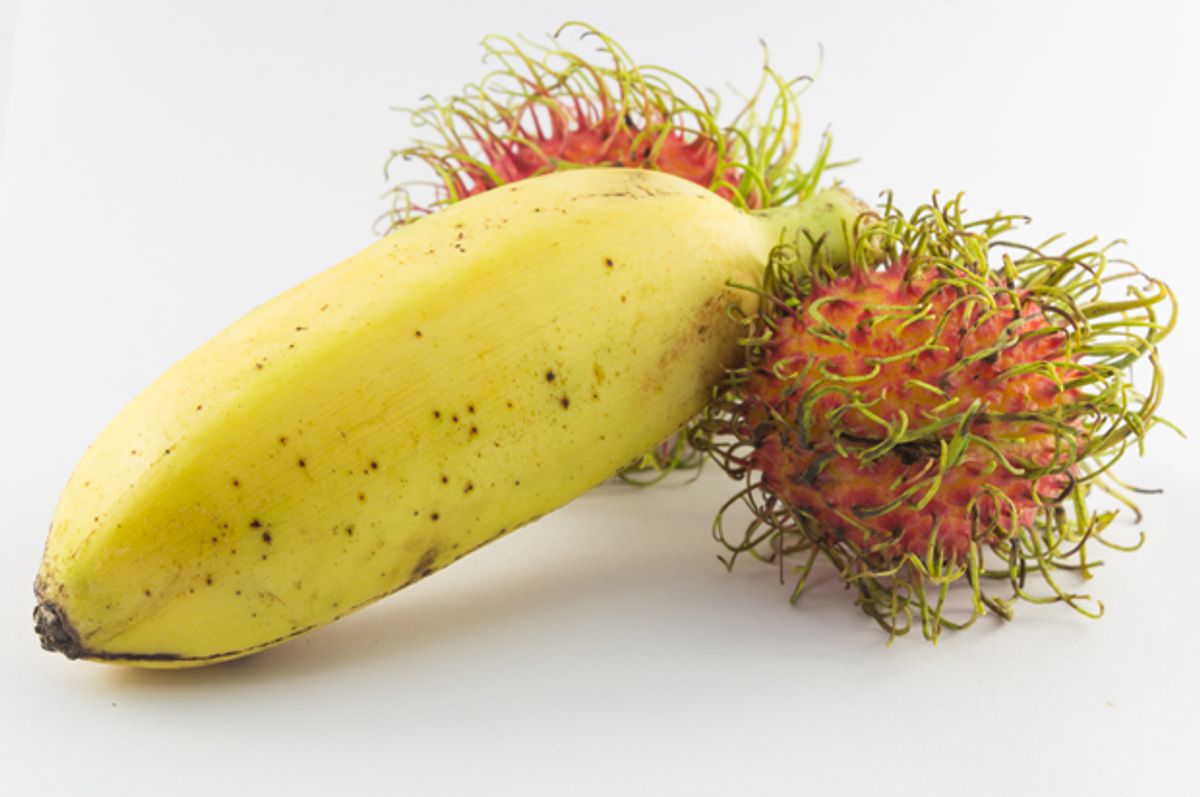 From the Washington Monument to the gear stick, the hotdog to the trophy, the phallus is everywhere. Sure, some may seem like happy accidents. Others more consciously constructed. But at the root of phallic adoration is a rich tradition of symbolism; a culture of images that begin and end with the penis. Often, we can trace these traditions back to a few familiar names.

Min is the Egyptian god of fertility and agriculture who was central in the coronations of new pharaohs. He is most commonly represented in human form, bearing an enormous erection. In hieroglyphic form, he is represented simply as a phallus.

Hindu mythology holds that when Shiva, the god of destruction and change, was killed, the goddess Kali ripped out and ate his organs and then mounted his still-erect penis to “complete the cycle of creation.” Today, Shiva is represented by the “lingam,” or penis, for worship in temples. And no place is more phallus-filled than the city of Varanasi, which draws in thousands of pilgrims each year looking to bathe in the River Ganges’ sacred waters. Varun Soni of the University of Southern California explained to the producers of "The Dickumentary," “Every courtyard, every temple, every time you turn around you’ll see a lingam. There are literally lingams everywhere.”

During the making of the film, director Sofian Khan managed to uncover a little-known fact about the devoted men of Varanasi: they stretch their penises as a sign of worship. “They cut a hole in the tip and force a stick through it, then they forcibly stretch it,” Khan told the New York Post, noting that the tradition will eventually prevent participants from achieving erections. “They’re giving up their sexual side as a form of worship,” he says.

A bit further east, we encounter the Shinto religion of Japan. Shinto is an ethnic religion based on a collection of native beliefs and mythology that has given rise to an elaborate shrine culture. Just guess what form some central shrines happen to take?

The Hōnen Matsuri is one of Japan’s many festivals in which an inspired citizenry gets to parade around a giant phallus for the day. The goal of the festival is to help ensure the fertility of participants. One highlight includes rows of unmarried women carrying small phalluses in their arms, asking those in the crowd for blessings of marriage and fertility.

Phallic processions were also a common feature of Dionysiac celebrations, meant to symbolize the coming of spring and fertility. While the tradition has largely died out, the Greek town of Tyrnavos continues the practice today. During the annual celebration of Burani, the townspeople celebrate with phallic food, puppets, hats and pretty much anything else that can easily be made to resemble a phallus.

Should you desire more permanent phallic displays, we suggest you head to the Mara Kannon Shrine in Tawarayama, Japan. According to legend, a feud broke out between two politicians, named Mr. Oji and Mr. Sue, nearly 450 years ago. Things became so intense that Mr. Oji felt it necessary to disguise his son as a girl and hide him in the local shrine until things blew over. Unfortunately, Mr. Sue found the boy, and in addition to cutting off his head, severed the boy’s penis. In response, the locals started making wood and ceramic phalluses to replace the boy’s missing member. Today, the forest surrounding the shrine is littered with phallic statues.

Joining Japan in the league of leading penis legends is South Korea. Haesindang Park, also known as Penis Park, was built around a story featuring that most appropriate of protagonists: a virgin. Legend holds that after a young girl named Aerang drowned while picking seaweed, the local fishermen were unable to catch any fish. The villagers blamed the bout of bad luck on Aerang’s frustration over having died a virgin. To remedy the situation, they started presenting her with carved wooden phalluses. Aerang showed her appreciation by making it possible for the fisherman to return to the sea. Today, the park remains covered in phallic sculptures, including the benches, drums and even a moving cannon.

In what is now Bhutan, lived a 15th-century Buddhist teacher named Drukpa Kunley, also known as the Divine Madman. Historians have traced the regional belief in the phallus’ ability to ward off evil spirits and transform them into protective deities back to Drukpa, who could allegedly subdue demonesses with his “thunderbolt.” He’s quoted as saying, “happiness lies below the navel.”

Then there are the phallic mysteries. Who exactly constructed the Cerne Abbas Giant? What ever happened to Jesus’ foreskin? And why do we still care? Penis appreciation, it would appear, can’t be buried by years gone by. And that can probably help explain a few modern developments following in the phallic footsteps of the past.

The Icelandic Phallological Museum, located in Húsavik, Iceland, is “probably the only museum in the world to contain a collection of phallic specimens belonging to all the various types of mammal found in a single country." Its proud members are aiming to resurrect the ancient science of phallology, the scientific study of the penis. Inside the museum lie more than 200 penises and penile parts belonging to “almost all the land and sea mammals that can be found in Iceland.”

David Francis Cassidy is also really serious about penises. So serious that he founded a temple in 1970 as a tribute to Priapus, a Greek god of fertility. In the years since, temples have opened in Texas, New York and Canada. The temple’s extremely NSFW website reads, “There is no creation but that which is created by the Phallus. On your knees and worship Cock.” All temple services, special celebrations and administrative meetings are held in the nude, “without exception.” Group sex is an important part of temple life; in fact, failure to participate in some sort of sex during the interview means your application to the temple will be dropped. But it’s not all phallic fun and games. A strict set of rules exists for members of the temple. All brothers are expected to pledge four hours per week to the work of the temple or to relieve sexual frustration, either theirs or others.