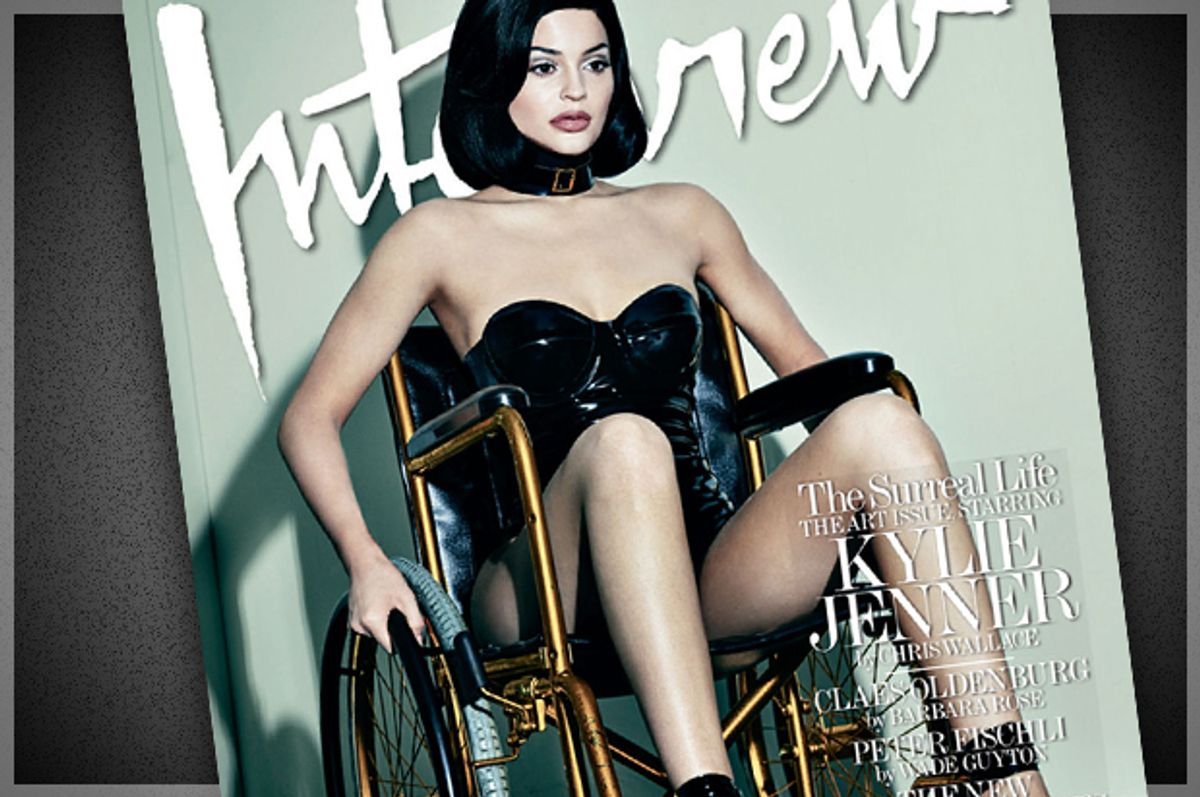 It's a radical suggestion but try it out — when members of a more disenfranchised, marginalized group of individuals say you've done something insensitive or offensive, believe them. Don't assume that they don't get it; don't make excuses. Don't, in short, be Interview magazine.

The magazine found itself on the defensive this week after unveiling its newest cover image — a dead-eyed, latex-clad Kylie Jenner seated in a black and gold wheelchair. The photo — along with the series inside — is meant to celebrate both "the surreal life" of the 18 year-old Jenner and the magazine's art issue. There's a picture of her in a crate like a mannequin, and others where she's being carried stiffly by a bespectacled man. The photos are an homage to controversial British artist Allen Jones — best known for his sculptures that depict women, often in fetish gear, turned into pieces of furniture.

But it's those wheelchair pictures that raised eyebrows — and questions about exploitation. On Wednesday, a magazine spokesperson defended the spread in a statement to E!, explaining, "At Interview, we are proud of our tradition of working with great artists and empowering them to realize their distinct and often bold visions. The Kylie Jenner cover by Steven Klein, which references the British artist Allen Jones, is a part of this tradition, placing Kylie in a variety of positions of power and control and exploring her image as an object of vast media scrutiny." Right, see, that whole power and control thing is actually why some people have taken offense.

The response on social media has been strong, summed up by disability activist Ophelia Brown, who posted a real world image of herself next to the Jenner one, observing, "@KylieJenner wow being in a wheelchair is so fun and fashionable! #Ableism is the ultimate fashion statement!" It's been shared over 17 thousand times. She later added, "I'm going to get 'A WHEELCHAIR ISN'T A FASHION STATEMENT' tattooed on my face so that people can look at it until THEY UNDERSTAND."

Her opinion was shared by others. Speaking with CNN, Emily Smith Beitiks, associate director of the Paul K. Longmore Institute on Disability in San Francisco said, "It's deeply disturbing. People with disabilities are already seen as powerless, and this just reinforces that." She added, "I think she's literally being objectified made to look like a sex doll, and this wheelchair is an added element of passivity they're adding on."

The seemingly calculated to inspire outrage photo shoot has become a now at least monthly publishing event. But did Interview's editors consider for a moment that people who don't use wheelchairs as props might find the Jenner photos hurtful? Were they being ignorant, or did they just not care? Either way, it really wouldn't have been hard to use the response to the images as an opportunity to do something other than issue a self-satisfied explanation that this is art. Thanks, we know what art is. We go to museums too. Or is Interview honestly just so full of it, in justifying its desire to trot out a teenager dressed up as a sex doll, that it truly believes we just don't understand it's doing?