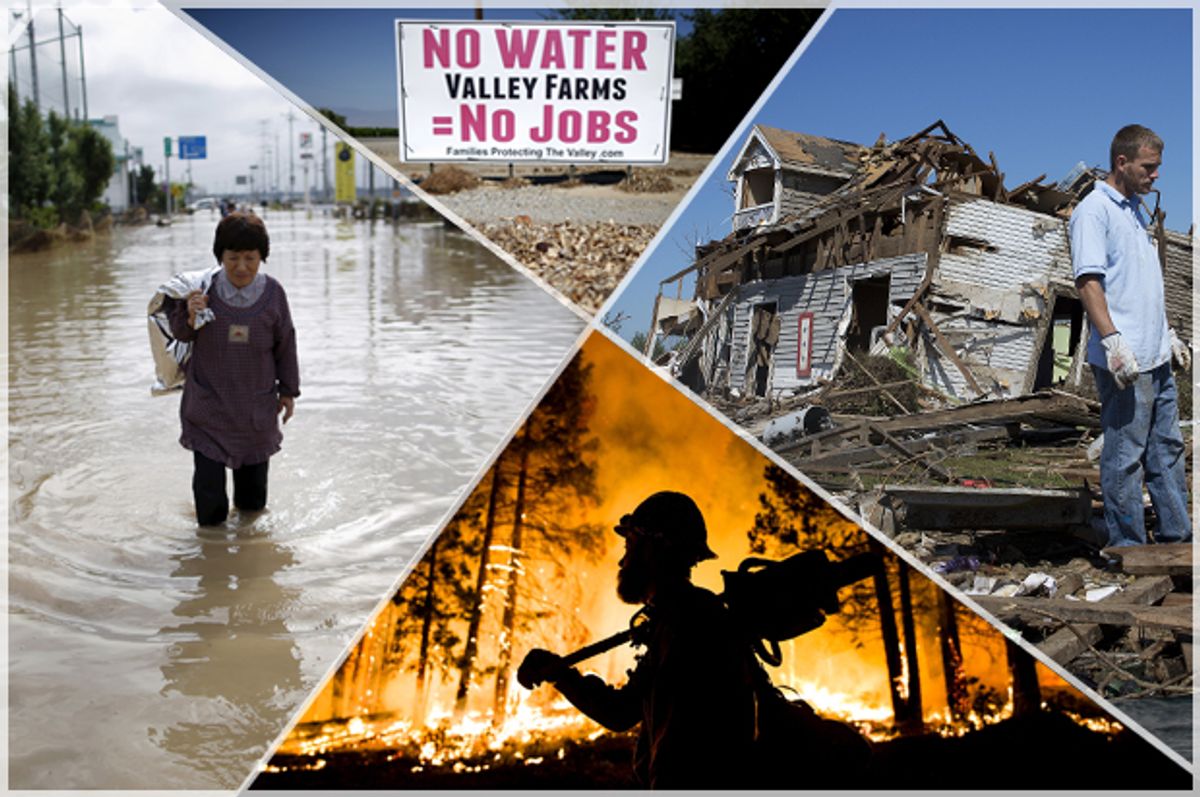 The Trans-Pacific Partnership (TPP) is more than 6,000 pages long, but does not mention the words "climate change" once.

This is one of the many findings in a new report by leading environmental organization the Sierra Club.

12 nations on both sides of the Pacific Ocean negotiated the TPP, including the U.S., Australia, Canada, Japan, Mexico, Vietnam, and more. The comprehensive pact will establish trade, economic, and political policies for approximately 40 percent of the global economy. And the deal is a "docking" agreement, which means other Pacific Rim nations, such as Indonesia and potentially even China, could later join.

Environmental and labor organizations have warned for years that the TPP, which has been characterized as "NAFTA on steroids," will mean disaster for the climate and for the economy.

"A Dirty Deal: How the Trans-Pacific Partnership Threatens Our Climate," the Sierra Club's new report, details just how disastrous it could be.

"The polluter-friendly model" of the TPP "poses a panoply of threats to our climate and environment," the report warns. It characterizes the international trade deal as a "step backward from environmental protections negotiated under the George W. Bush administration."

The Sierra Club's report finds that the TPP will do the following:

The deal will give foreign corporations the ability to sue governments for implementing environmental policies that do not meet companies' "expectations" or that could make their investments less profitable.

These lawsuits will be dealt with in unaccountable trade tribunals in which private lawyers can force governments to pay fossil fuel companies for hypothetical lost profits.

There is a precedent for this kind of policy. The report notes fossil fuel corporations such as ExxonMobil and Chevron have challenged environmental policies in the past on similar grounds. Such suits will only be made easier under the TPP.

So-called "safeguards" the U.S. inserted into the agreement, the report warns, "are far too weak to protect climate and environmental policies challenged by corporations in private tribunals."

The deal will require the U.S. government to automatically approve all exports of liquefied natural gas to all TPP countries. This is a fossil fuel that emits greenhouse gases that will accelerate climate change.

In forcing involved governments to export natural gas, as well as encouraging countries to build more infrastructure to trade natural gas, the TPP will make the world increasingly dependent on fossil fuels, moving it away from cleaner renewable energy sources.

These policies will result in more fracking, which will in turn lead to further pollution of the air and water, along with increased health risks.

By forcing U.S. manufacturers to compete directly with companies in low-wage countries like Vietnam and Malaysia, the TPP will not only destroy Americans' jobs; it will also be significantly worse for the climate, as governments in these low-wage countries have far laxer environmental regulations.

Moreover, by shifting manufacturing overseas, to countries on the other side of the Pacific, shipping-related greenhouse gas emissions will continue to grow. By 2050, such emissions are projected to increase by up to 250 percent.

Even governments' own autonomy will be restricted by the deal. States could be punished for mandating environmentally friendly spending. The TPP argues such policies could have the "effect of creating an unnecessary obstacle to trade."

In other words, the TPP makes things very clear: Corporations' rights supersede working people's and even their own governments' rights.

"Government officials charged with promoting the TPP typically ignore these threats to our climate, claiming instead that the pact's environment chapter would 'preserve the environment,'" the environmental organization writes. "However, the chapter includes no provision that would protect climate and environmental policies from the myriad threats posed by other parts of the TPP."

Moreover, "Even if the TPP’s conservation terms includedstronger obligations, there is little evidence tosuggest that they would be enforced," the Sierra Club adds. "The United States has never once brought a trade case againstanother country for violating its environmental commitments in a trade agreement, even amid documented evidence of violations."

The fact that the deal does not even mention climate change, the environmental group stresses, demonstrates that TPP nations are willing to put the interests of corporations above the interests of people living on a planet in increasing ecological peril.

Further bolstering the notion that TPP architects were not greatly interested in the interests of average working people is the fact that the deal was negotiated in secret for five years, without any input from the public.

Citizens of ostensibly democratic TPP nations were not allowed to see the deal their governments were deliberating in secret, while hundreds of large corporations helped write it. It was not until November that the text of the deal was finally released for the first time.

The TPP has not yet officially been adopted by the U.S. Congress still has the ability to reject the deal, but the prospects of this seem unlikely, considering Congress voted for fast-track authority for the agreement.

The Sierra Club released its report at a time when the heads of state of the world's most powerful countries are meeting in Paris for the United Nations Climate Change conference (COP 21). The environmental group hopes to pressure Congress and parliaments in other TPP nations to reconsider the deal.

"As the world's leaders gather in Paris to tackle climate disruption, the U.S. is pushing its largest trade deal in history, the Trans-Pacific Partnership, which not only fails to mention the climate crisis, but is actually counterproductive," remarked Ilana Solomon, director of the Sierra Club's Responsible Trade Program. "Congress should reject the toxic Trans-Pacific Partnership to ensure that we do not undermine any climate deal that emerges in Paris."