Rahm Emanuel's Nixon moment: The Laquan McDonald coverup will be his legacy

A Chicago cop will stand trial for a horrific murder. Rahm waited so long to release the video, he could pay, too 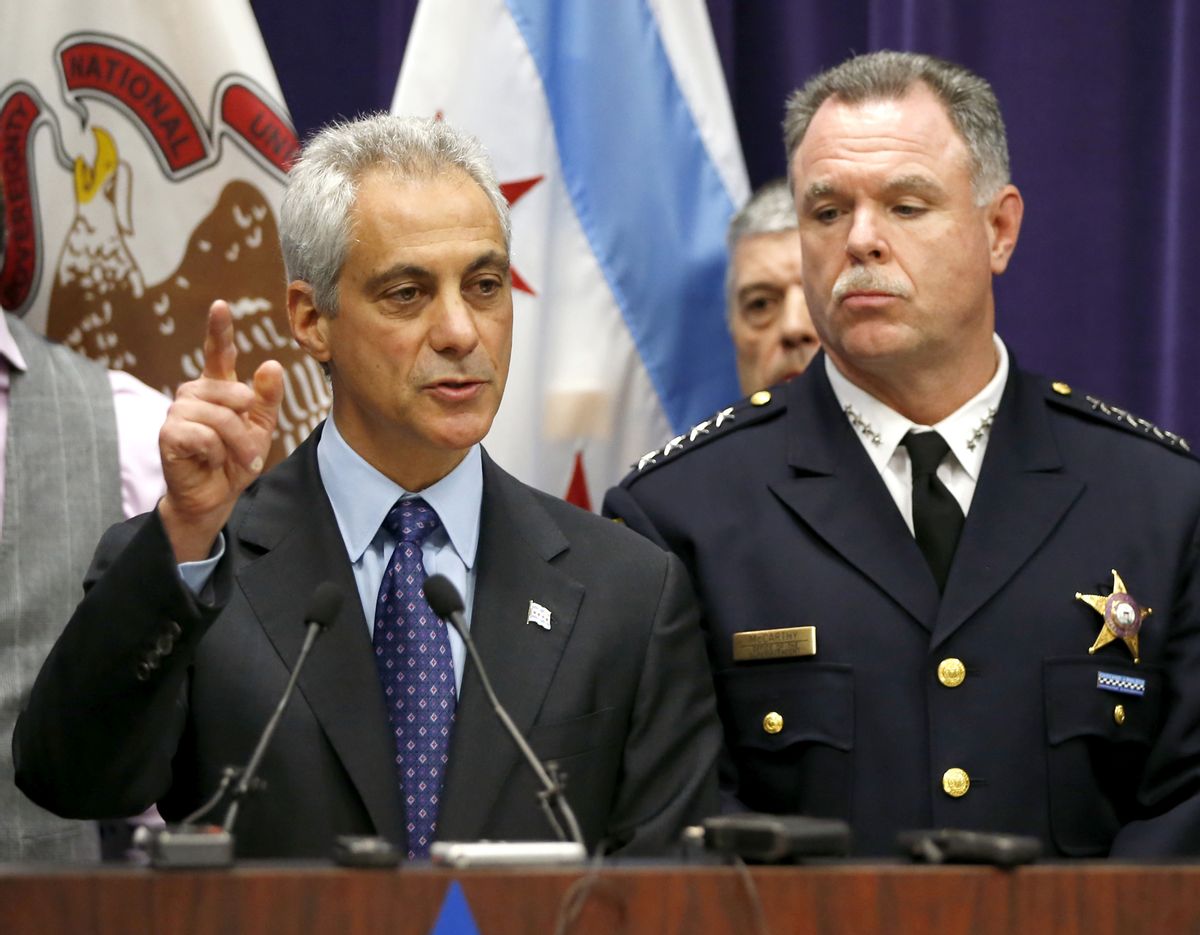 When Rahm Emanuel was a congressman, he was nicknamed “the Jewish LBJ,” not only for his ambition, but for his reputation as an amoral political animal focused only on power. Now that he’s facing his biggest crisis as mayor of Chicago – the coverup of a video showing a police officer shooting a black teenager 16 times – he’s looking much more like Richard Nixon.

On Tuesday morning, Emanuel began attempting to excise this cancer on his mayoralty by firing Police Superintendent Garry McCarthy, a move reminiscent of Nixon’s dismissals of H.R. Haldeman and John Ehrlichman. Then he held an “I Am Not Corrupt” press conference, which one veteran City Hall reporter called “the most unusual in his four-and-a-half years as mayor,” because he showed up on time and answered questions. When Rahm Emanuel starts treating people with respect, you know he’s in trouble. He also appointed his very own special prosecutors, announcing the formation of a Police Accountability Task Force, to be advised by former Massachusetts Gov. Deval Patrick, a Chicago native.

Emanuel was asked whether he had sat on the video – which was released 400 days after the incident, as the result of a lawsuit by a freelance journalist – to protect his reelection bid.

“The family came forward on February 27 contacting the city,” the mayor explained. “In a short time, we reached a conclusion. As it relates to the video, that on the completion of the investigation, the video would be made public, which is what happened. It is a common practice that you don’t release material essential to an investigation.”

Feb. 27 was three days after the mayoral election. Emanuel received 46 percent of the vote, forcing him into a runoff with Cook County Commissioner Jesus “Chuy” Garcia, in which the support of the city’s black voters would be decisive. The “conclusion” was a $5 million settlement with the family of Laquan McDonald, the 17-year-old gunned down by Officer Jason Van Dyke. The shooting occurred on Oct. 20, 2014. The video was finally released last month. A Cook County judge ordered it made public in response to a suit by journalist Brandon Smith. (The police department had previously turned down 14 Freedom of Information Act requests from news agencies.) Almost simultaneously, Emanuel condemned the officer for violating the public trust “at every level,” and Cook County State’s Attorney Anita Alvarez charged him with first-degree murder.

There’s even a missing tape in this Nixonian saga. After McDonald was shot, police spent hours viewing security camera footage at a Burger King across the street from the scene. When officials from the Independent Police Review Board asked to view the footage, 86 minutes were missing, from 9:13 p.m. to 10:39 p.m. McDonald was shot at 9:57. The store’s manager believes police erased the tape, but the FBI says it found no evidence of tampering.

Police shoot civilians all the time in Chicago, which has led the nation in homicides for every full year of Emanuel’s term. In 2014, they killed 17 and wounded 28. As the Chicago Tribune noted in a headline last year, “In Chicago, police shootings rarely protested.” But this shooting was different, because the video contradicted the official story that McDonald had lunged at officers with a knife, and because it ended with the sight of smoke trails from bullets passing through his inert body. On the day after Thanksgiving, protesters formed a human wall outside the tony shops on Michigan Avenue, causing one would-be Apple Store patron to wail, “I’m an American. I just want to shop!” On Monday, the University of Chicago campus was closed after an anonymous threat to shoot 16 white males in retaliation for McDonald’s death.

But Emanuel wasn’t just caving in to demonstrators by firing McCarthy. Howard Brookins, a prominent African-American alderman, responded with this statement: “I appreciate the Mayor’s willingness to change course and to make the right decision to demand new leadership at Chicago Police Department.”

And now that McCarthy is gone, both African-American and Latino politicians are calling for the resignation of State’s Attorney Alvarez, who viewed the video weeks after the shooting, but took over a year to charge Van Dyke with murder. Cook County Board President Toni Preckwinkle – the second-most prominent local elected official, after Emanuel – has called Alvarez’s conduct “disgraceful,” and is backing her own candidate in next March’s Democratic primary. Kim Foxx, a former prosecutor who is now Preckwinkle’s chief of staff, grew up in the now-demolished Cabrini-Green projects (the setting for the TV series "Good Times"), and experienced homelessness, fatherlessness, and sexual abuse as a child. With Alvarez having alienated minority voters, Foxx has to be the favorite.

It didn’t have to be this way for Rahm and the rest of Chicago’s political establishment. As longtime Machine-hater Ben Joravsky pointed out in the Chicago Reader, the city’s alternative weekly, Emanuel “could have been the hero” in the McDonald case.

As impossible as this sounds, just imagine Mayor Emanuel had released the video in, say, November—without being forced to by a lawsuit.

Cook County state’s attorney Anita Alvarez probably would’ve quickly responded with an indictment—just like she did earlier this week, when the tape actually was released.

I mean, it’s really hard to look at that tape and not call for an indictment.

If the mayor had done that, he wouldn’t be the villain in this sordid story. He’d be the hero. Or at least the guy who finally, for once in his life, did the right thing.

My God, he no doubt would have made hay out of the incident in campaign commercials too, which would have made him out to be the most fearless public servant since Gary Cooper in High Noon.

But of course, he didn't do the right thing. He buried the video. He allowed officials to mislead the public.

He hid the tapes because most likely he assumed it would hurt his reelection campaign.

Thus he not only did the immoral thing, he did the politically stupid thing.

The Watergate scandal wasn’t about a crime committed by a minor underling, it was about the big boss’s attempt to cover it up. So it is with the McDonald shooting. Unlike McCarthy or Alvarez – or even Nixon -- Emanuel won’t be so easy to get rid of. His term does not expire until May 2019, and he’s promised to run again. [] A Chicago mayor can’t be recalled, and it’s impossible to imagine him being impeached by a City Council which has never defied him on a single vote.

The Rahm haters’ best hope is that he accepts a position in President Hillary Clinton’s cabinet. Emanuel said in April that he has “zero interest” in returning to Washington. But he also said last week that he “fully” supported McCarthy. Sixteen bullets may have forever changed the course of his political career.