"Fox & Friends": Prayer is more effective than gun control, and if you disagree with that "you're lining up with terrorists" 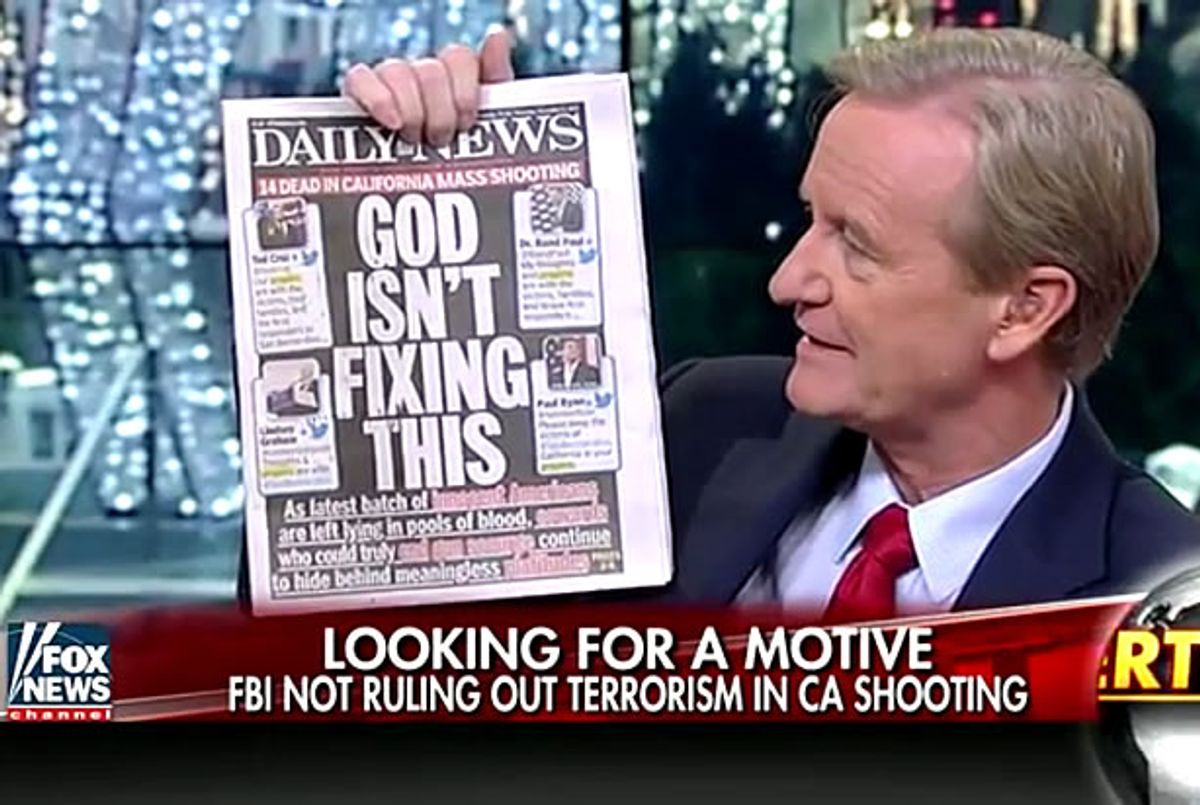 On Thursday, "Fox & Friends" took its cue from its network's delightful coverage of the San Bernardino shooting last night and focused on what really matters -- namely, that this might have been a terrorist attack and that prayer works, this possible terrorist attack notwithstanding.

The touchstone for all their conversations was the cover of today's edition of the New York Daily News:

Co-host Steve Doocy had a copy of the paper and held it up, repeatedly, saying "if God won't fix this, we need more [gun] laws." GOP presidential hopeful Carly Fiorina agreed, saying "it's stunning to me -- this is an example of how afraid the left-wing is of our values."

Fiorina later argued that "it turns out that [South Carolina shooter] Dylan Roof should never have been sold a gun; it turns out that South Carolina has strict gun laws; and it turns out that all of the violence in Chicago is sitting in a city with the strictest gun control laws," so what the national conversation should really be about "is calling crimes like this what it appears to be," namely, terrorism. And, of course, prayer -- which is what Fiorina claimed was the first thing she urged people to offer when she heard about the shooting.

Doocy and Hasselbeck agreed, with Doocy holding up the Daily News cover again and saying, "on the cover of the Daily News they have politicized this already. 'Hey, Republicans,' they're saying, 'God isn't fixing this. As the latest batch of innocent Americans are left dying in pools of blood, cowards.' Who [do] they picture right here? Rand Paul, Paul Ryan, Ted Cruz, Lindsey Graham, all Republicans, [or] 'cowards who could truly end gun scourge but continue to hide behind meaningless platitudes.'"

Hasselback replied, "I was so disturbed by that cover. When you see tweets like Chris Murphy out of Connecticut saying 'your "thoughts" should be about steps to take to stop to take this carnage. Your prayers should be for forgiveness if you do nothing again.' And then a tweet from the editor of ThinkProgress, Zack Ford, saying, 'Try this: Stop thinking. Stop praying. Look up Einstein's definition of insanity.'"

As proof of the efficacy of prayer -- or the political expediency of it, at least -- Doocy offered a text sent to the father of a woman trapped by the San Bernardino shooters: "Shooting at my work, people shot. In the office waiting for cops. Pray for us."

"He said his daughter in there," Hasselbeck noted, "texting him at the time, 'pray for us.' I say this, if you want to line up with terrorists and try to take God away, you're not on the right side. hat's all I'd have to say to those politicians who want to tell you to stop praying. Just don't."

Watch the entire interview with Fiorina below via Fox News.

Watch the segment in which they discuss the expediency of prayer below via Media Matters.