Jewish leaders implore the U.S. to "welcome the stranger," not to turn away refugees as it did during the Holocaust 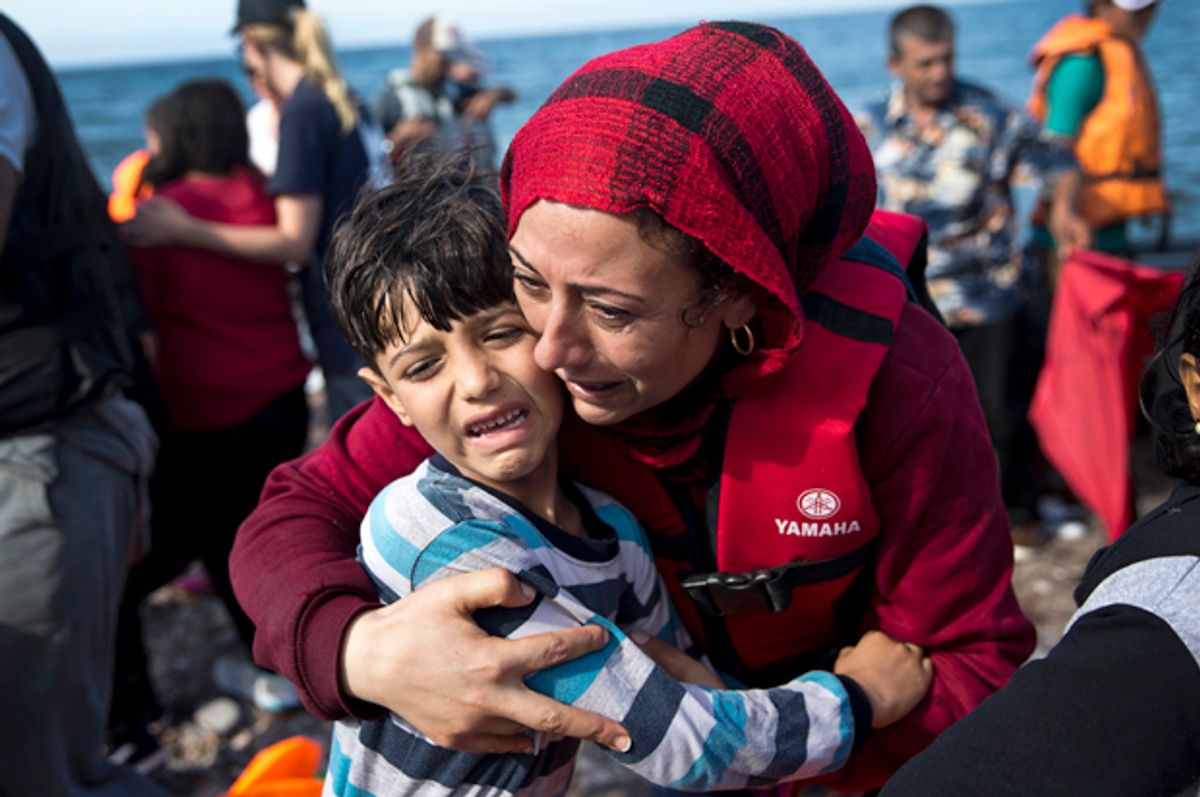 "In 1939, the United States refused to let the S.S. St. Louis dock in our country, sending over 900 Jewish refugees back to Europe, where many died in concentration camps," write more than 1,000 American rabbis in a letter delivered to Congress yesterday. "That moment was a stain on the history of our country – a tragic decision made in a political climate of deep fear, suspicion, and antisemitism."

"The Washington Post released public opinion polling from the early 1940s, showing that the majority of U.S. citizens did not want to welcome Jewish refugees to this country in those years," they continue. "In 1939, our country could not tell the difference between an actual enemy and the victims of an enemy. In 2015, let us not make the same mistake."

HIAS, a U.S.-based Jewish charity organization, organized and delivered the letter to all federal lawmakers.

The Jewish leaders are calling on Congress to welcome Middle Eastern refugees into the U.S., primarily those fleeing extreme violence in Syria and Iraq. The rabbis, representing congregations in 46 states and Washington, D.C., implored "our elected officials to exercise moral leadership for the protection of the U.S. Refugee Admissions Program."

On November 19, the House of Representatives passed a bill that may prevent Syrian and Iraqi refugees from entering the U.S., even though no refugees were involved in the November 13 Paris attacks, which supporters of the legislation tried to use as justification.

The Senate will soon vote on the anti-refugee legislation. President Obama has vowed to veto any anti-refugee bill passed, if a two-thirds majority is not reached in Congress.

In the HIAS letter, the rabbis draw parallels between their own ancestors' past struggles and the plight of Middle Eastern refugees today. "Last month’s heartbreaking attacks in Paris and Beirut are being cited as reasons to deny entry to people who are themselves victims of terror," they write. "And in those comments, we, as Jewish leaders, see one of the darker moments of our history repeating itself."

The U.S. Holocaust Museum has also expressed concern about refugees, making similar connections. "Acutely aware of the consequences to Jews who were unable to flee Nazism, the United States Holocaust Memorial Museum looks with concern upon the current refugee crisis. While recognizing that security concerns must be fully addressed, we should not turn our backs on the thousands of legitimate refugees," it said in a statement.

"The Museum calls on public figures and citizens to avoid condemning today's refugees as a group," it continued. "It is important to remember that many are fleeing because they have been targeted by the Assad regime and ISIS for persecution and in some cases elimination on the basis of their identity."

Human rights organizations and the U.N. have said they are "deeply disturbed" at the "scapegoating of refugees" in the U.S. and Europe, and have condemned the government clampdown on asylum-seekers.

"Some U.S. politicians are threatening to close our doors to refugees. This is a false solution to a real problem, conflating terror with those who flee it. By fostering intolerance, such words and deeds play right into the hands of our enemies and weaken our national character," remarked HIAS President Mark Hetfield, who stressed that the rabbis are "stand[ing] up for Jewish and American values by welcoming refugees."

"This letter shows that support for refugees within the American Jewish community is overwhelming, and stretches across all denominations," stated HIAS Vice President of Community Engagement Rabbi Jennie Rosenn. "More than 1,000 rabbis have joined the call to elected officials to keep the door open to those who are yearning to breathe free. As rabbis, it is important to acknowledge that this is a frightening time in our world, but with confidence we can, and must, still welcome the stranger. We know all too well from our own recent history that the cost of not doing so can be tragically high."