Onboard the Trump Train: It's too easy to dismiss Trump's Iowa supporters as uneducated rubes -- the truth is more complicated

Some cheer his racist rhetoric, but others seem to ignore the hate -- that he's a political outsider is enough 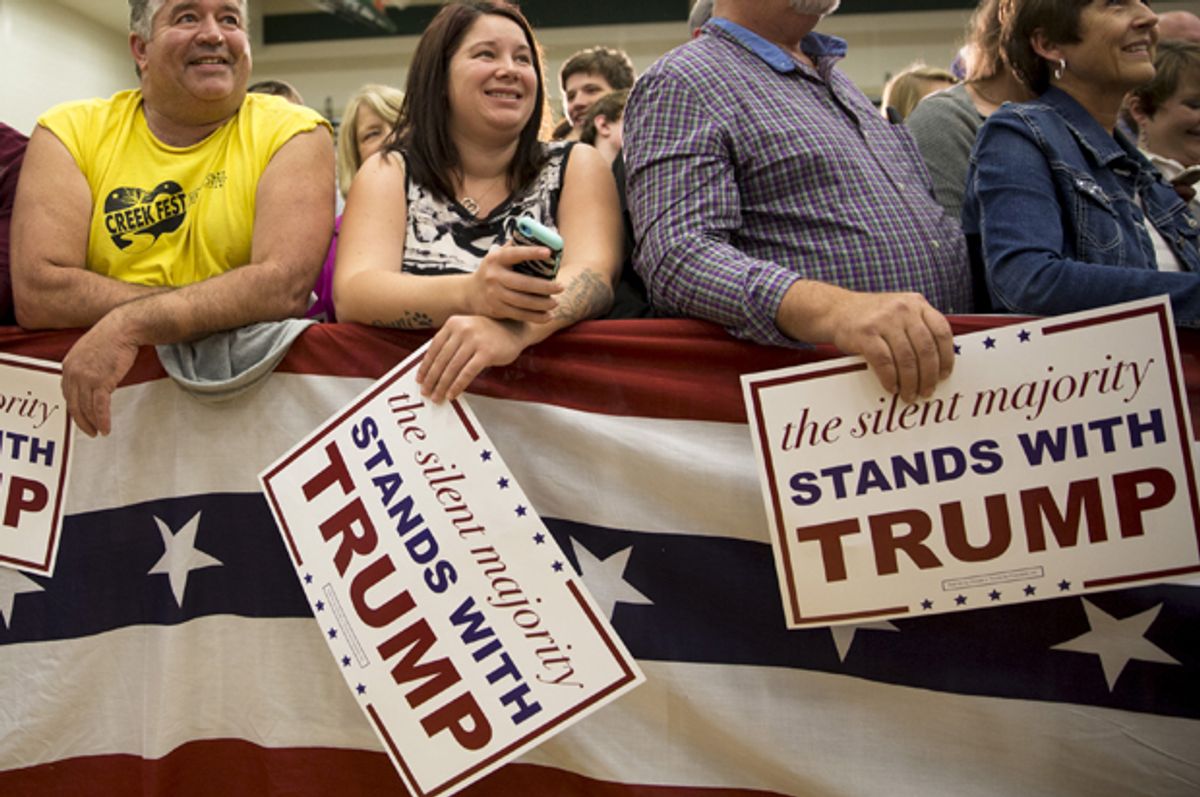 Before a crowd in South Carolina last week, Donald Trump appeared to mock a New York Times reporter's disability. Such cruel behavior is beyond comprehension in a presidential candidate, and once again prompts the question: Who would support a man prone to spew hate? Trump's fans, it turns out, include not only white supremacists but also peace-loving yogis and media-savvy businesswomen.

The default position for most pundits since May has been to consider Trump's candidacy a joke and then to puzzle over its refusal to fade. Yet, with a mere two months until the Iowa caucus, he remains atop the polls. Meanwhile, his jingoistic rhetoric continues to produce material effects, bringing out the worst in people, recently made clear again by his supporters' attack on a Black Lives Matter protester at a rally in Alabama.

The collective dismissal of his candidacy has meant that few have taken his supporters seriously. We often hear that they are uneducated and unlikely to show up to caucus. Following GOP campaigns around Iowa in recent weeks, I've seen a more complicated picture. Certainly some of his fans respond to his xenophobic and racist rhetoric with cheers, but others seem to suppress the worst of his comments or blame the press. They flock to him as a political outsider and for his business prowess.

At a Trump rally in Newton, I met Rick Shaddock. Shaddock is an independent businessman who practices Transcendental Meditation®.

"Ivanka Trump," Shaddock told me, "practices TM. It's mentioned in her blog that it's one of the most important things she does each day.”

Shaddock is not only educated, but learned from Trump himself. "I took some online courses," he said. "It was called Trump University, and it helped me get a lot of real estate, which gives me freedom, financial freedom to come to events like this." (Trump faces several lawsuits alleging that Trump University defrauded its students.) Shaddock read "The Art of the Deal" in the 1990s and said he likes Trump because "he’s all about helping other people become rich, that’s the idea behind these books. And the idea behind 'The Apprentice' is that someone else can learn from him and become successful as well."

Shaddock runs a website for Trump called TrumpFairfield.com. Its tagline reads, "Sharing rides and information about events to make America and Fairfield great again, using the power of positive consciousness." That last phrase adds a distinctly un-Trump ring to the site. And indeed, Shaddock has his hesitations about his favorite candidate. "I’m a little concerned that Donald Trump wants to be going to war. We’ve had enough war. We need to have peace. Transcendental meditators in general are all about peace and developing our full potential." Who would be his second choice? Bernie Sanders.

Before Trump came to the stage in Newton, his Iowa co-chair, Tana Goertz—who introduced herself as "the Iowa girl who went all the way" on "The Apprentice"—pumped up the crowd. "Now you guys are going to get to really see Mr. Trump," she said. She performed the Iowa ritual of exhorting the audience to caucus, asking for county captains, encouraging everyone to bring 10 more people, and instructing folks to plan for a blizzard on Feb. 1. Trump staffers assertively circulated caucus cards. Goertz ended by saying, "Sit back, buckle up, and enjoy the ride. Jump aboard the Trump Train, 'cause folks, we are going places, and we are going places fast, and we are steamrolling anyone who gets in our way to the White House."

Andrew Worrell, a retired heavy equipment technician from nearby Kellogg, described himself as fully onboard that train. The recent attacks in Paris only confirmed his choice. "With the threats that are coming from overseas," he said, "I, just, I'm scared. I’m very scared. And it’s another big reason why I think Donald is the guy we need." But he, too, worries that Trump can be a bit much. As I was walking away, he called me back to say, "I hope Donald can reel it in a little bit, some of the things he says. I know that’s his character and that’s OK. But I don’t want people to lose faith in him."

The rally ended with the surprise announcement that the Trump campaign had ordered Domino’s pizza for everyone and was handing out Make America Great Again winter caps. Between slices, Andy Robinette, a self-described philanthropist, told me he likes Trump and Hillary Clinton. The last time he caucused it was for Clinton. He said, "Hillary's compassionate and Donald's business sense." After the rally, he was leaning toward Trump.

Jerry Penniston, a retired educator and former city councilman from Ottumwa, also caucused last time for a Democrat (though he couldn't remember which one). An Independent, he talked about helping Jimmy Carter's campaign and mentioned how he and his wife had their picture taken "by the Secret Service with Billy at his brother's gas station." Quoting Shakespeare, Penniston said, "The past is prologue, you can only judge a person by what they've done in the past and achieved in the past and by far [Trump] is head and shoulders above the crowd."

He continued, "A man like this comes along once in a hundred, hundred fifty years, like a Roosevelt. This man is a genius."

The week before, Iowans braved a storm that toppled semi-trucks to see Jeb Bush at the Waukee Fire Department in a suburb of Des Moines. Bush proved his reputation for being inept at retail politics. When asked about the state's need for employees, he criticized Iowa's educational system. Talking about what he's reading, he mentioned, to the conservative Republican crowd, a book about Homo sapiens that tells how "we could have been another species." Regarding ethanol, he told Iowans, "You have to move on." But he did chest bump a supporter who said he'd switched to Bush from Ted Cruz.

One might not expect to find Trump supporters at a Bush event, but the first person I spoke to, Jacqueline Riekena, an IT business consultant who works for Wells Fargo, put Trump near the top of her list. Though she belongs to an older generation, she likes Trump, she said, "because he appeals to the millennials. He’s very verbose and he’s very confident about how he’s going to do things. He’s also matching Hillary on number of followers on Twitter and you’re always worried about front-runners gaining that much momentum early in an election."

It is easy to cast aspersions on Trump supporters. It is comforting to assume that, to pledge their support for someone who lacks regard for facts and who routinely incites racism, they must be uneducated and racist. (Trump himself has more than once described Iowans as stupid.) This helps build a narrative that persists in projecting that Trump will fade, that come the caucus, Iowans will support serious candidates, and that those merely attracted to Trump's celebrity will stay home.

But the transcendental meditator, the self-described philanthropist, the retired educator and the business consultant defy these expectations. They ignore the hate. What they see in him in is best expressed in clichés: a proven success, someone who gets things done. Together they suggest the breadth of Trump's support.

That support does, of course, include plenty of hate. At the Iowa Faith and Family Presidential Forum, I spoke with a landscape contractor from Adel who believes President Obama is a "Muslim communist." Regarding ISIS, he said, "You want them on your shores? With your kids in a major city? Or do you want to take it over there and get rid of the problem?" He offered his foreign policy solution. "I would just nuke it and fly off."

He argued that abortion is the greatest threat to America's future. "We’ve aborted over 61 million babies who would be taxpayers, they would be employees, and would be fathers and mothers, doctors, could be senators, who knows, you know what I’m saying? We’ve aborted a whole generation and we wonder why we have problems." He laughed, then went on to say, "You’re threatening your future by killing your offspring. That’s not going to take long to cycle into the next generation when you’re going to be short a lot of people and you’re going to be like, where’s everybody at?"

But he has his doubts about Trump's religiosity. "You can carry a Bible around all you want, just like Clinton used to. That doesn’t mean you’re a Christian. Ask them to quote you one verse out of it, even Trump says, well, that’s private. How’s it private to tell people about Christ or say what you read this morning in your devotions?"

A few minutes later, Trump came to the stage. He opened by saying, "I brought my Bible. See? I’m better than you thought." He added, "I also brought my confirmation picture. Because nobody can believe it. Nobody believes this. What went wrong?"