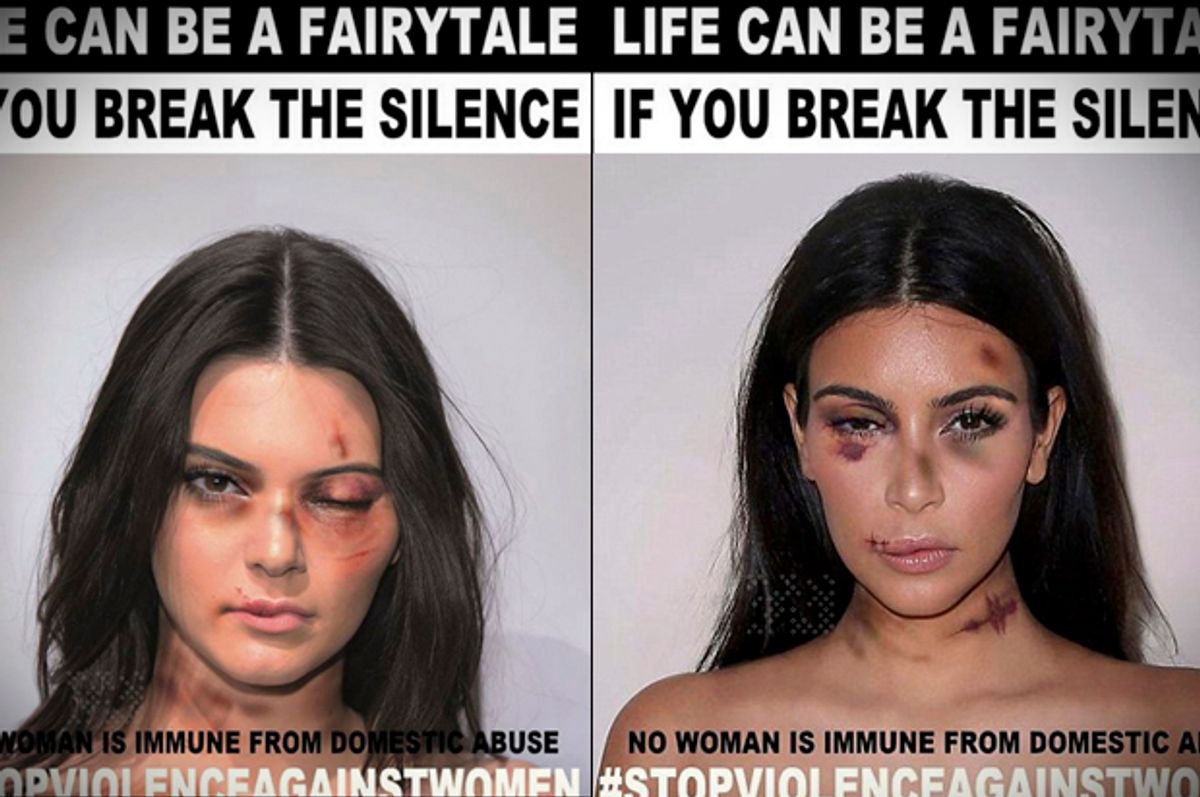 Can a Photoshopped picture of a battered Kim Kardashian help stop domestic violence? Artist Alexsandro Palombo thinks so. To raise awareness for the International Day for the Elimination of Violence Against Women, Palombo posted photos to his Facebook that depicted female celebrities including Kardashian, Gwyneth Paltrow, Angelina Jolie, Miley Cyrus, and Madonna as abuse victims. Their faces appear bloodied and beaten—with blackened eyes and swollen jaws.

Although Palombo initially released the pictures on November 23, they’re gone viral in the past week—catching the eye of Kim Kardashian’s legal team, who has promised to take action. A spokesperson for the artist responded in a statement to U.K.’s the Independent: “Palombo's new series is not a campaign, not an advertisement, not for sale, it's the artist point of view of a social issue, his contribution to break the silence.”

While speaking up about domestic violence is important, how we do so matters. The biggest problem with Alexsandro Palombo’s activism is that it sensationalizes an issue that should speak for itself. The reality of domestic violence in America—as well as across the world—is so graphic and disturbing that we shouldn’t need a doctored image of Kim Kardashian being beaten up to elicit our outrage. Studies from the Centers for Disease Control show that 1 in 3 women will be the victim of intimate partner abuse in their lifetime—and it’s their stories that we should be talking about.

If violence against women is a global epidemic, too often it’s a silent one. In the United States, one woman is killed by her partner every single week, and as Amanda Marcotte points out, “men kill women in the U.S. so often that it’s usually not even newsworthy.” When U.S. troops were being killed in Afghanistan and Iraq, it was a national crisis—and a sign it was time to bring them home. However, between the years of 2001 and 2012, nearly twice as many women were beaten and killed by their partners than the number of soldiers lost in the Middle East.

Women bear the brunt of violence in America, but they continue to be made its invisible victims. While stories about mass shootings make headlines nearly every day, we rarely focus on the fact that most of these fatal incidents take place in the victims’ homes—such deadly killings are largely the murder of women and children. Take these numbers from a must-read 2015 survey from the Huffington Post: “In 57 percent of mass shootings, the shooter targeted either a family member or an intimate partner. … 64 percent of mass shooting victims were women and children.”

As Vice President Joe Biden has argued, the numbers of women who are killed in mass shootings or targeted for abuse by their partners isn’t just a problem for America’s criminal justice system. It’s also one of the great public health crises of our time. “According to the CDC and other research, the chronic stress from domestic violence is toxic to the body,” Biden said. “It's associated with long-term health problems like asthma, diabetes, anxiety, depression, alcohol and drug abuse.” In addition, physical and sexual trauma has also been linked to long-term brain damage.

While the lifelong effects of physical violence are shocking, what’s most horrifying is our continued cultural complacency around domestic violence. In a critical thought experiment, Medium’s Charlie Pickering asks us to imagine that it were energy drinks or shark attacks harming or killing women at these rates. “Imagine the level of public outcry, media hysterics and political action it would elicit,” he instructs us.

But we don’t do that. Instead, we talk about what the victim could have done to prevent her abuse. After photos of showing pop singer Rihanna beaten by her then-boyfriend Chris Brown went viral in 2009, MTV received a surprising amount of feedback alleging that it must have been her fault. “I don’t think Chris would just a hit a girl like that,” one commenter wrote. “She had to do something or say something out the way for him to really hurt her.” Another repeated a common justification in the wake of the assault: “If what I hear is correct and Rihanna gave Chris an STD, then she needed it.” A poll from the Boston Examiner showed that 50 percent of teens agreed with these statements.

A piece published in the Los Angeles Times back in 2009 shows that it wasn’t just Internet trolls shaming her but industry insiders—who branded her “irresponsible” and argued that it would taint her “good girl” image. As disgusting as that is, it proved accurate: She was quickly labeled a “bad role model” for young women—first for being friends with her abuser and then for going back to him. These judgments ignore the reality of domestic violence—on average, a victim will attempt to leave their abuser seven times before it sticks—but they are all too common.

The stigma against coming out and speaking up forces many women to remain silent, but that doesn’t mean we should be. If an estimated 4.7 million women face abuse from their partners each year, these women are our friends, our neighbors, our coworkers, and our relatives—whose pain isn’t a hypothetical photo posted to Facebook. These survivors need our support and our advocacy. They deserve a culture that not only encourages them to seek whatever help they can but one that fights for them—by reminding us that their lived experiences matter.

No one deserves to be abused by their partner. They also don’t deserve a culture that would rather pretend it never happened.