Second medical facility bombed by U.S.-backed Saudi-led coalition in Yemen in just over a month

Three Doctors Without Borders medical facilities have been bombed by U.S.-backed forces in the past two months 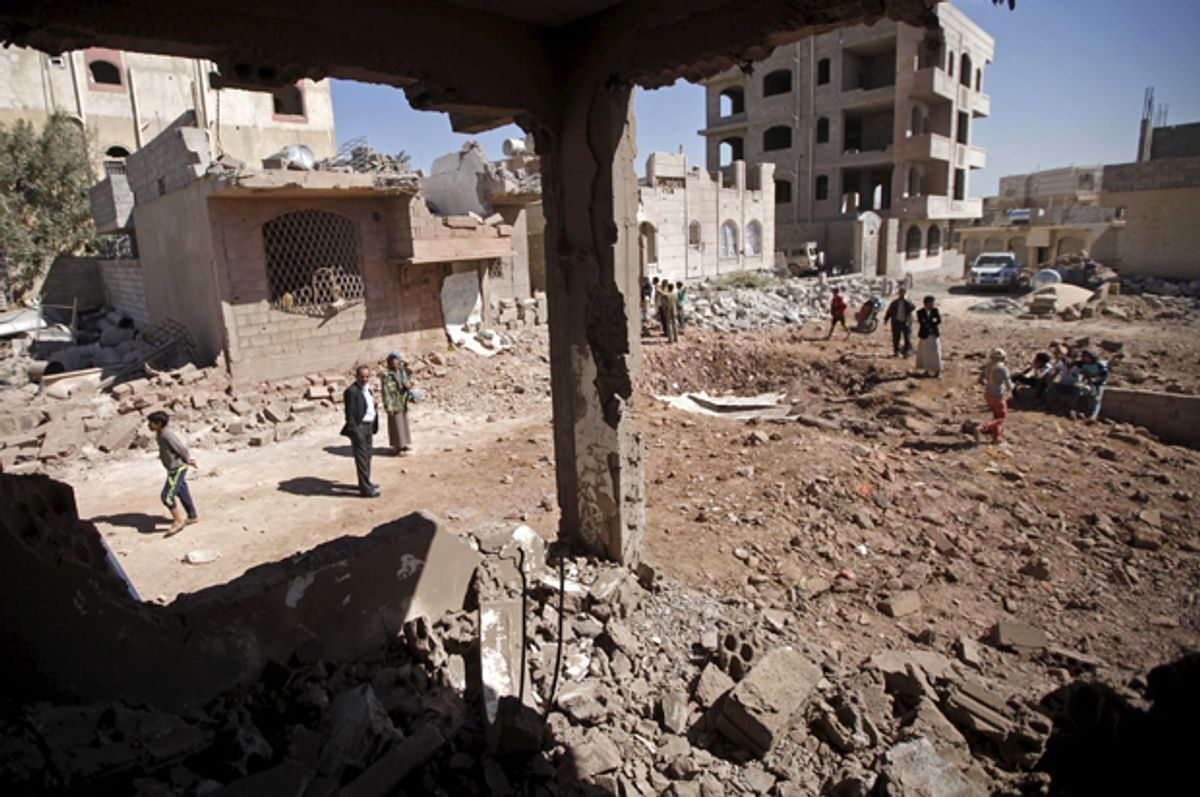 Another Doctors Without Borders medical facility in Yemen was bombed yesterday -- the second to be destroyed by the U.S.-backed Saudi-led coalition in just over a month.

At least nine people were injured, including two medical staff members. Two of the wounded have life-threatening injuries. The injured were transferred to two other hospitals being supported by Doctors Without Borders, which is known internationally as Médecins Sans Frontières (MSF).

The clinic, which was located in the al-Houban district of Yemen's southern city Ta'iz, had treated 480 patients in the two days before the attack.

As in previous cases of U.S.-backed forces bombing MSF facilities, the Saudi-led coalition was given the precise location of the al-Houban clinic. "The health structure's GPS coordinates were regularly shared with the Saudi-led coalition, most recently on November 29, when we informed them about this specific activity in al-Houban," noted Jerome Alin, MSF head of mission in Yemen. "There is no way that the Saudi-led coalition could have been unaware of the presence of MSF activities in this location."

"The bombing of civilians and hospitals is a violation of international humanitarian law," Alin emphasized. "Civilians seeking health care and medical facilities must be respected."

The United Nations condemned the bombing. Secretary-General Ban Ki-moon stressed that "medical facilities and medical personnel are explicitly protected under international humanitarian law." The U.N. called for "a prompt, effective and impartial investigation" into the attack.

On October 26, the U.S.-backed coalition bombed another MSF hospital in Yemen's northern Sa'ada Governorate. Saudi authorities denied responsibility, but the U.N. and MSF both confirmed that the airstrikes were indeed carried out by the coalition, insisting it was "beyond doubt."

In the October attack, MSF again made it clear that its "hospital's GPS coordinates were regularly shared with the Saudi-led coalition, and the roof of the facility was clearly identified with the MSF logo," yet the hospital was still shelled for two hours.

The U.N., in what has become ritual, likewise condemned the bombing and called for an impartial independent investigation. None was conducted.

Just three weeks before, on October 3, the U.S. bombed yet another MSF hospital in Kunduz, Afghanistan. At least 30 people were killed in the attack, including 10 patients, 13 staff, and 7 unidentified persons. MSF called the bombing a "war crime," and joined the U.N. in demanding an independent investigation. The U.S., whose explanations for the attack on the hospital changed multiple times and were full of contradictions, refused to allow one.

MSF later released the identities of the staff members who were killed in the U.S. bombing of its Afghan hospital, along with brief biographies, so the world could learn about the medical workers who sacrificed their lives to help save lives.

On November 28, a fourth MSF medical facility was bombed, this time in Syria. A hospital in Homs was partially destroyed in a "double-tap" barrel bombing, a signature tactic of Syria's Assad government. Seven people were killed and 47 were wounded. Brice de le Vingne, Director of Operations for MSF, said the "double-tap tactic shows a level of calculated destruction that can scarcely be imagined."

War broke out in Yemen, the poorest country in the Middle East, on March 26. A coalition of Middle Eastern nations and militants loyal to President Abd Rabbuh Mansur Hadi, led by Saudi Arabia and armed by the U.S., is fighting Houthi rebels and militants loyal to former President Ali Abdullah Saleh, some of whom have received weapons from Iran, although the extent to which Iran is involved is contested.

The Saudi-led coalition has been accused by human rights organizations and the U.N. of committing numerous war crimes. The coalition -- which is committing these atrocities with weapons, including banned cluster munitions, provided by the U.S. -- has bombed weddings, Oxfam aid warehouses, and residential neighborhoods.

Close to two-thirds of civilian deaths and property destruction have been caused by the Saudi-led coalition, according to the U.N. Amnesty International indicates that "more civilians have died as a result of coalition airstrikes than from any other cause during the conflict in Yemen."

The coalition denies that it is purposefully targeting civilian infrastructure, but journalist Sharif Abdel Kouddous, who visited sites of airstrikes on the ground in Yemen and spoke with local authorities, reports that Saudi-led forces are bombing Yemeni infrastructure like bridges with "a high degree of precision." A Yemeni political analyst told Kouddous, "The Saudis act with impunity, so it doesn't matter. It's not a big deal that they hit a wedding. Since the beginning of the war they have denied pretty much everything."

An average of roughly 30 people have been killed every single day in Yemen for the past eight months. At of the end of October, the World Health Organization reported that more than 5,700 people had been killed, including at least 2,615 civilians and 573 children. Approximately 27,000 more were injured.

Since the war began in March, MSF, which is working in eight of Yemen's 21 governorates, has treated more than 16,000 patients. The aid organization notes it "provides impartial and free of charge health services to those in need in more than 70 countries around the world."

The U.S.-backed war has completely devastated Yemen. The U.N. has warned the "health and education systems in the country are on the brink of collapse."

Despite the destruction, in a visit to allied absolute monarchy the United Arab Emirates (UAE) in late November, Secretary of State John Kerry insisted the relentless Saudi-led coalition bombing and UAE-led ground invasion of the poorest country in the region is helping "accomplish significant progress in Yemen."