Syed Farooq is an American: Let's stop the Muslim vs. Christian debate and take a look at ourselves

His terrible deed does not spring from an unknowable foreign culture. It is violence endemic to the United States 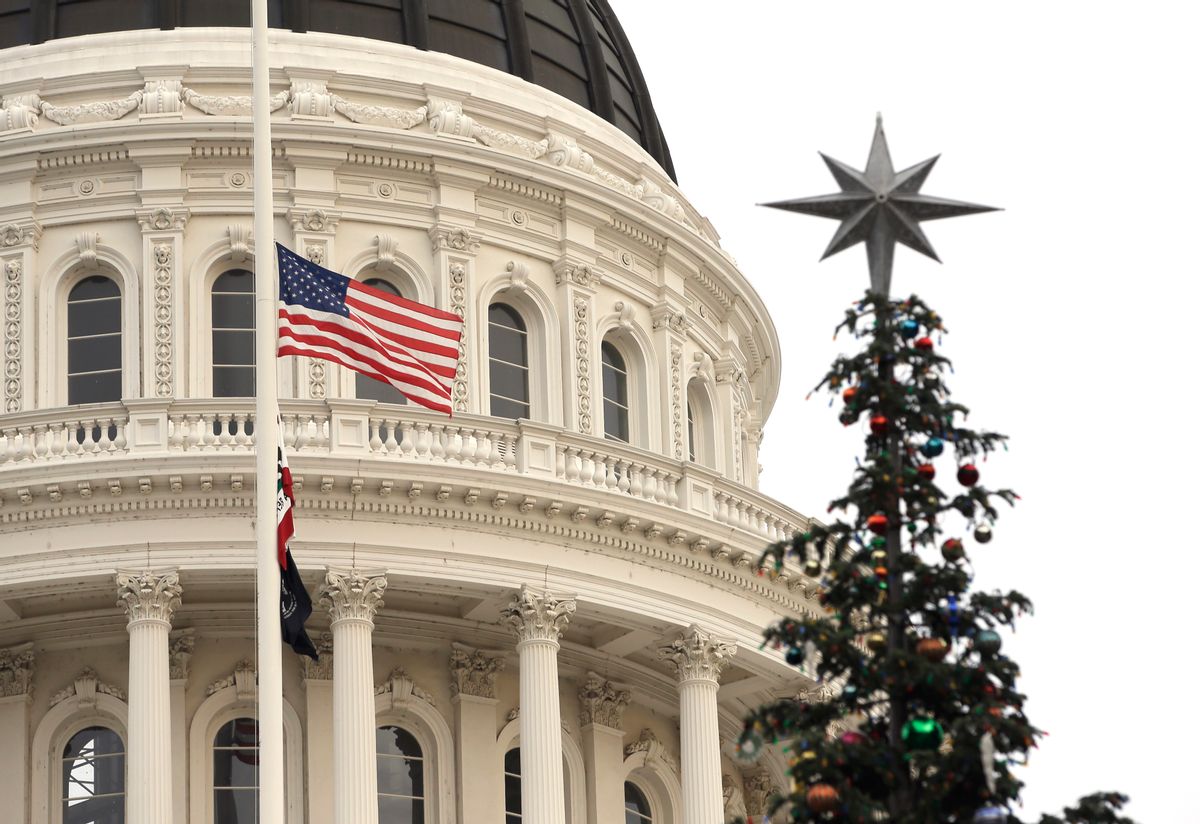 I address you in a moment of collective stress, with another mass shooting, this one in San Bernardino, California, dominating the news.  Guessing the identity of shooters—black or white, Christian or Muslim, man or woman (though masculinity is almost guaranteed)—has become a vicious social media ritual.  Too many people seem to believe we can discern motivation by ethnicity, or that ethnicity alone determines what type of terror can rightly be deemed terrorism.

It was with much sadness that I witnessed your gleeful reaction when police named Syed Farooq, a devout Muslim, as one of the suspects.  You seem to be under the impression that a Muslim shooter absolves the United States of brutality, forgetting that Farooq is also an American.  This worldview allows you to embrace mythologies that exonerate you of political violence.

But we must acknowledge Farooq’s nationality, because his terrible deed does not arise from an unknowable foreign culture, but from one endemic to the United States.  You can exempt yourself from Farooq’s actions only if you are willing to exclude minorities from your national identity.  Many of you are happy to do that, but it’s an intellectually lazy choice.

It is why I greet you as a compatriot.  The greeting might make you uncomfortable because I am Arab, but I am also American.  Being American requires no special ethnic, religious, or ideological character, even though our nationality contains implicit demands.  One of those demands is to not be Arab or Muslim.

Enough about technicalities, though.  I don’t approach you to be pedantic or to beg for your acceptance, nor do I have any interest in situating mass murder into hierarchies of tolerability.  I merely ask you to consider why those hierarchies exist and why it’s so easy to name state violence as necessary or desirable.  There’s a connection between the supposed deviance of Farooq’s shooting and your endless, adamant justification of U.S. bloodletting throughout the world.

To put it plainly:  thinking about violent behavior as something innately foreign is a terrific rationale for delivering violence to foreign places.  It forces you to hate people and demands your loyalty to institutions designed to contravene your interests.

I think you’ve been hoodwinked by politicians and luminaries into hating Arabs and Muslims.  This hatred is bad for Arabs and Muslims, of course, but it also does you little good. It might make you feel better about your place in the American racial hierarchy.  It might alleviate your majoritarian anxieties.  It might reaffirm the superiority of your faith.  It might make patriotism easier to accept.

It doesn’t, however, help you better understand this world and it certainly won’t keep food on your table.  In fact, it deprives everybody of intellectual and economic sustenance.

The attitudes you possess—that Arabs are beholden to violent culture, that Islam singularly produces religious evil, that Syrian refugees threaten American safety, that the Middle East and South Asia are places of mystical barbarity—have existed since before 9/11, but they seem to have a particular resonance in the current presidential election.

It’s become remarkably disturbing, to be honest.  It reminds me a bit too much of the rhetoric preceding the internment of Japanese Americans during World War II.  I don’t select the analogy at random: more than one eminent conservative has suggested interning Muslims. Liberal beacon Wesley Clark did, too, when he spoke approvingly of interment and proposed it as a remedy for the “disloyal.”

Every day I hear another demagogue inflaming your outrage, urging you to maintain an acutely resentful psychology.  Ben Carson, often described as judicious and presidential, recently proclaimed that he “would not advocate that we put a Muslim in charge of this nation,” a flagrant constitutional violation and a vulgar bit of pointless scapegoating.

Last week, Donald Trump repeated the canard that Arabs in New Jersey celebrated as the Twin Towers collapsed, claiming that he witnessed “a heavy Arab population that were cheering as the buildings came down.”  Trump implies that all Arabs supported 9/11.  None, therefore, is trustworthy.  There is no reason to make this sort of comment other than to manipulate our desire for safety and thereby create a pretext for unthinkable possibilities.

Is it too difficult to recognize the many problems of a discourse that relies so heavily on demonization to generate support?  The demagogue can enact violence only when his audience refuses to recognize the violent nature of demagoguery.

Politicians love nothing more than a frightened, uninformed citizenry.  It’s how they convince us to cosign our dispossession.  People who discern gray areas and have the ability to reason through propaganda are their most undesirable clients.  The United States cannot be a functional democracy if we make ourselves so compliant.

Believe it or not, Arabs and Muslims (and other minorities) are not the source of your problems.  Turn to the politicians who promise you an uncomplicated world for a better target of your anger.

I know you’re ready to counter with “terrorism,” but the term is largely a bromide in the American political vocabulary.  It’s useless to debate which groups commit more violence.  No week passes that we don’t hear of another white supremacist plot to murder South Asians, Jews, Muslims, Hispanics or African Americans.  The U.S. and its allies generate extraordinary destruction in the regions of the world said to be uniquely barbaric.  Police kill with impunity. Our president orders death by remote control.  Everybody suffers but the people who oversee this horror.

Displays of spectacular cruelty pervade the United States, but you embrace any opportunity to disavow them as an exotic problem.  And still more people will be killed today—many by those for whom you voted and to whom you pay taxes.

We should work to better understand how the elite apportion discourses of violence into categories of good and evil, civilized and savage, rational and unreasonable.  Who creates these binaries?  Who suffers their finality?  Who profits from their endurance?

Let’s explore these questions together.  We’ll surely be surprised by what we learn through the simple act of listening.  Before we do, though, I ask you to remember that I am proudly Arab but legally American, and I refuse to entertain the possibility that either category invalidates the other.