This is why Trump is winning: "Muslim Killers," manipulated fear and the other mass shooting we ignored

The same day that 14 were killed in San Bernardino, 4 were shot in Savannah—and that barely made the news 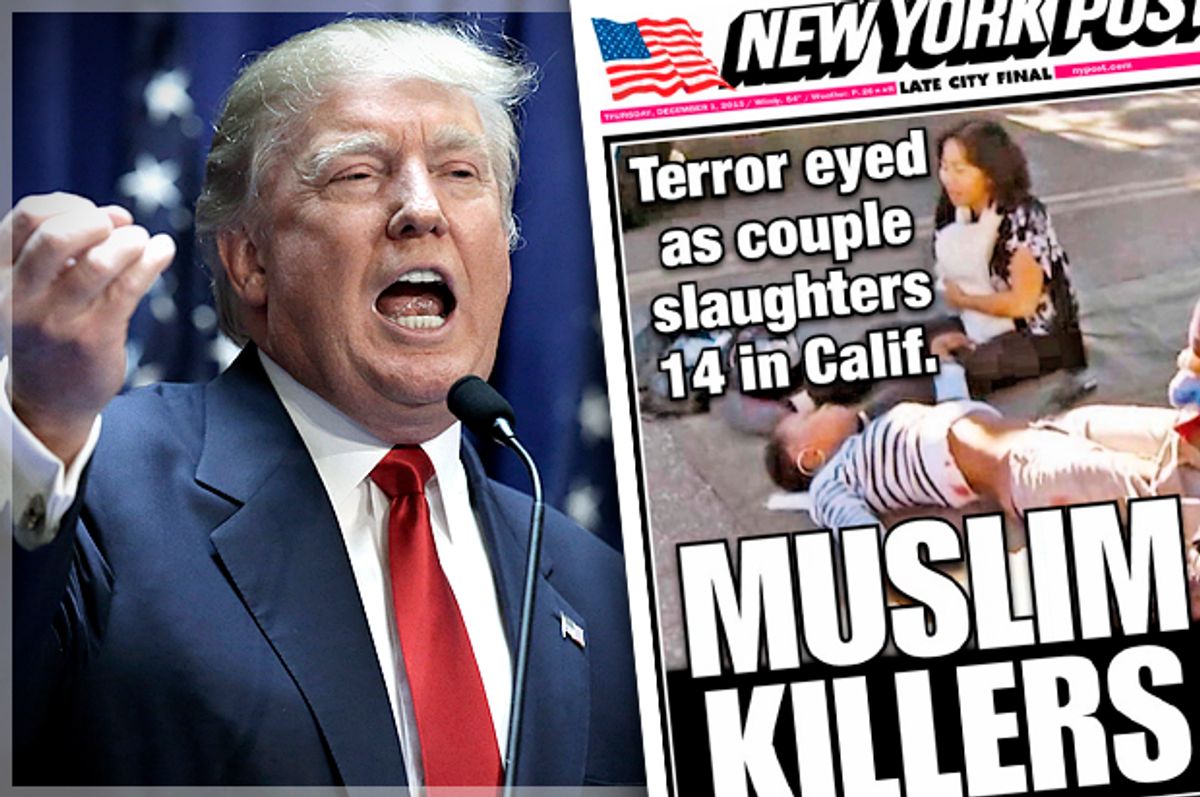 If you want to understand why Donald Trump is crushing the rest of the Republican field, the explanation is the other mass shooting that happened yesterday.

No, not the one in San Bernardino, the tragedy that is dominating the airwaves and prodding "prayerful" tweets from politicians. Not the reality-being-stranger-than-fiction televised news scene bringing together "long guns," "disabled students," "mental illness," and "terrorism," triggering outraged armchair analysts to parse the meaning of each vague yet loaded term in order to shape that fury into sounds that made sense to them. The media trained its sights on San Bernardino, finding its stealthy patience rewarded with cameras shooting live footage of a car chase that ended, carthartically, in more violent deaths.

Meanwhile, a man in Savannah, Georgia, shot four people. One died. Apart from the fact that the single fatality was a woman, there is no other information. No names, no details. That shooting barely made the local news.

Technically speaking, what happened in Georgia is a "mass shooting." But "mass shooting" is another term that sets people off, as the definition of what is "mass" and what is "shooting" will produce thick threads of insults and counter-insults in comments sections. What those bickering quarrels come down to is this: If the media doesn't pay attention, is it really a mass shooting? Or is it just another quarrel that ended up getting people shot dead?

Implicitly, it is understood that the term "mass shooting" invokes unspoken that actually have nothing to do with the number of victims, the randomness of the violence, the ideological claims driving the decision to kill, or even the motives. It has to do with the way society patrols class (and racial) boundaries, narrating roles through attributes as rigid as Gabriel's trumpet or Daniel's lion. Nobody ever asks where the saints get their stuff, but guns are expensive and how can those people afford---I mean where did they-- er, it's wrong for thugs & terrorists to get their hands on them! The violence must not only be horrifying enough to get attention, but the victims must produce a shock of empathy strong enough to perform a psychic rupture that demands to be healed through panaceas or panegyrics so that work can resume.

So when similar levels of violence are visited upon the poor and disenfranchised, as was the case in that particular street in Savannah where the four anonymous victims got themselves shot because that's what happens in that neighborhood, there is no sense of rupture, no threat to the self, nothing but sad confirmation that that is how those people live and so violence is to be expected. There is no story in the grinding downer of despair. And so the media ignores it. It can't compete with spectacular acts of violence screaming for attention.

Which is why Trump is leading in the Republican polls. His campaign is the political equivalent of biopic about a mass shooting that the media has fooled itself into thinking is an actual case of political carnage. His excesses allow us to tell ourselves that we would never vote for such a clown, never condone such vitriol, never vote for a party that supports him as a candidate, never live in a country where he was president, never allow ourselves to be so deluded as to applaud him. We will never let ourselves live in Trumpland, for we are better than him. We see those cheering for him at rallies and decide, firmly, that we will never join that crowd.

But if Trump is Islamophobic, xenophobic, self-aggrandizing, anti-intellectual, and profoundly invested in shoring up the white male institutional norm that he euphemistically calls "making American great again," so is a good chunk of the media that created him--and he knows it. Blame the culture of capitalism.

The image stayed exactly the same, but the media messaging had changed, becoming more inflammatory, more ideological (no headline for Robert L. Dear ever bleated, "CHRISTIAN KILLER"), and shamelessly racist. Worse, the updated headline was not so much reflective of new details, as it was confirmation that we're already bored with the old "mass shooting" story. On her Facebook page, a friend who lives in California noted yesterday, "At lunch today...this was on the big TV. We should all have been speechless with disbelief and horror, coming together with strangers in our shared humanity, clustered around the screen with hands to our mouths. Instead, it looked as if no one was even watching."

In other words, as Jack Mirkinson noted, the New York Post's decision to change the headline but not the photograph, "only works if you think that worrying about the disturbing frequency of mass shootings isn’t itself worthy of commentary." The shooting in Savannah reveals rather starkly that mass shooting in itself has barely worth acknowledging. Ergo, the New York Post's headline gets changed to evoke Islamophobic "terrorism," stoking fears in exactly the same way as does Trump in his speeches, invoking the existential threat that implicates the nation. Suddenly, it gets attention again.

When Trump runs an ad in the rural states of Iowa, New Hampshire, and South Carolina, asserting that "politicians are all talk and no action," then adds that he will "brutally and quickly cut off the head of ISIS," the people who believe he means this literally are the ones for whom chopping heads off critters is no big deal, who likely served in the military, for whom ordinary violence is lived and not a reality show on television. Before you snigger at such credulity and bemoan the normalcy of gun deaths, consider these words: "shooting" "sighting the target," "triggering" and "positioning the shot." Am I talking about a mass shooting, or the work of the media sent to cover it?