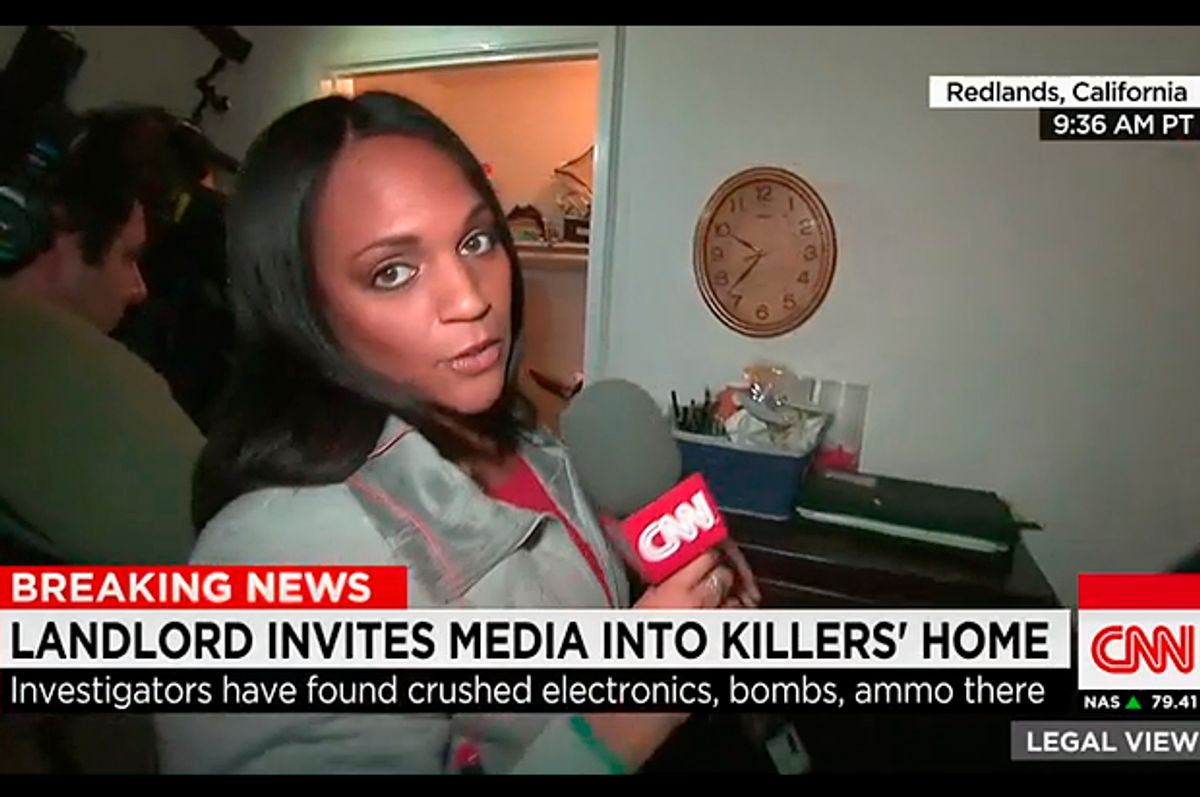 Earlier today something like two dozen national reporters with camera crews broadcast live from inside the apartment of Syed Rizwan Farook and Tashfeen Malik, the married couple that killed 14 people dead at a holiday party on Wednesday. The apartment was still full of the couple’s belongings—baby clothes, books, photographs, and toys. The CNN reporter inside the apartment told Anderson Cooper that reporters had been let in by the landlord, who opened up a barricade over the door erected by the police using a drill and crowbar. The MSNBC reporter, who started broadcasting first, picked up a driver’s license with a full name and address on the bed and showed it to the camera. Shortly before he found the driver’s license, he was in the bathroom, going through a stack of baby pictures. He becomes briefly overwhelmed as Andrea Mitchell asks him questions. For a moment, it seems clear to him, the magnitude of what he is doing.

It is presently unclear whether or not the FBI had finished with the scene before the landlord let reporters in. All circumstantial evidence suggests it was still active, however. Harry Houck, the CNN analyst brought in to comment, was aghast at the proceedings. He said he was shaking—had “chills down my spine.” Houck observed that the lack of fingerprint dust and the stacks of unseized documents suggested this was “clearly” still a crime scene. As he spoke, the camera in the apartment panned down to show a reporter sitting on the floor of a closet, meticulously going through a box of documents. Social media backlash was swift, too.

If there is just one takeaway from the San Bernardino shooting this week, it is the American media has lost it. The camera crews are desperate for material and willing to do nearly anything to get it; this extrajudicial apartment spree sounds like one of William Randolph Hearst’s schemes from the heyday of yellow journalism. [In fact, it is very similar. “The Murder Of The Century,” by Paul Collins, relates how Hearst rented out the apartment of a suspected murderer from a delighted landlord before the police could declare it a crime scene, giving his paper the exclusive. To further stick it to his rivals at Joseph Pulitzer’s paper, they cut the phone lines to every payphone on the block.] MSNBC, CNN, and others seem fueled by the same desperation for information, at any cost—even if, in this case, it constitutes a major invasion of privacy, tramples on a crime scene, and makes a whole apartment full of evidence potentially inadmissible.

This case comes at the epicenter of several different American horrors: Islamic terrorism, the legality of semiautomatic assault rifles, the rise in mass shootings, the inaccuracy and speculation that dovetails with an ongoing investigation, our already beleaguered social services for the developmentally disabled, and the fact that this young couple left a six-month-old baby girl at home to go commit mass murder. Especially for the media—or for anyone who would push back against the notion that Islam is not a religion of hatred, as so many of our commentators seem to think—this is a narrative that is elusive in how inexplicably awful it is.

We clearly don’t have the apparatus to discuss it. The unfiltered media stream on Wednesday showed an inability to come to consensus on mere terms: “terrorism,” “gun control,” “active shooter.” The articulation of these arguments isn’t about policy; it’s about choosing a side. Conservatives say things this way, and liberals say things that way, and the media has no choice but to dog-whistle both while reporting the news.

All, that’s left, in some sense, is excavating horror. If I were a reporter outside that apartment, I know that I would have absolutely gone inside, once the landlord opened the door. Because this murder doesn’t make sense, and the way we talk about it doesn’t make sense, but if I could get closer to it, maybe I’d begin to understand a little more why everything feels to have gone so wrong.