"We don't want to be politically incorrect," Pirro said, but "that's hogwash! We're in a new time now!" 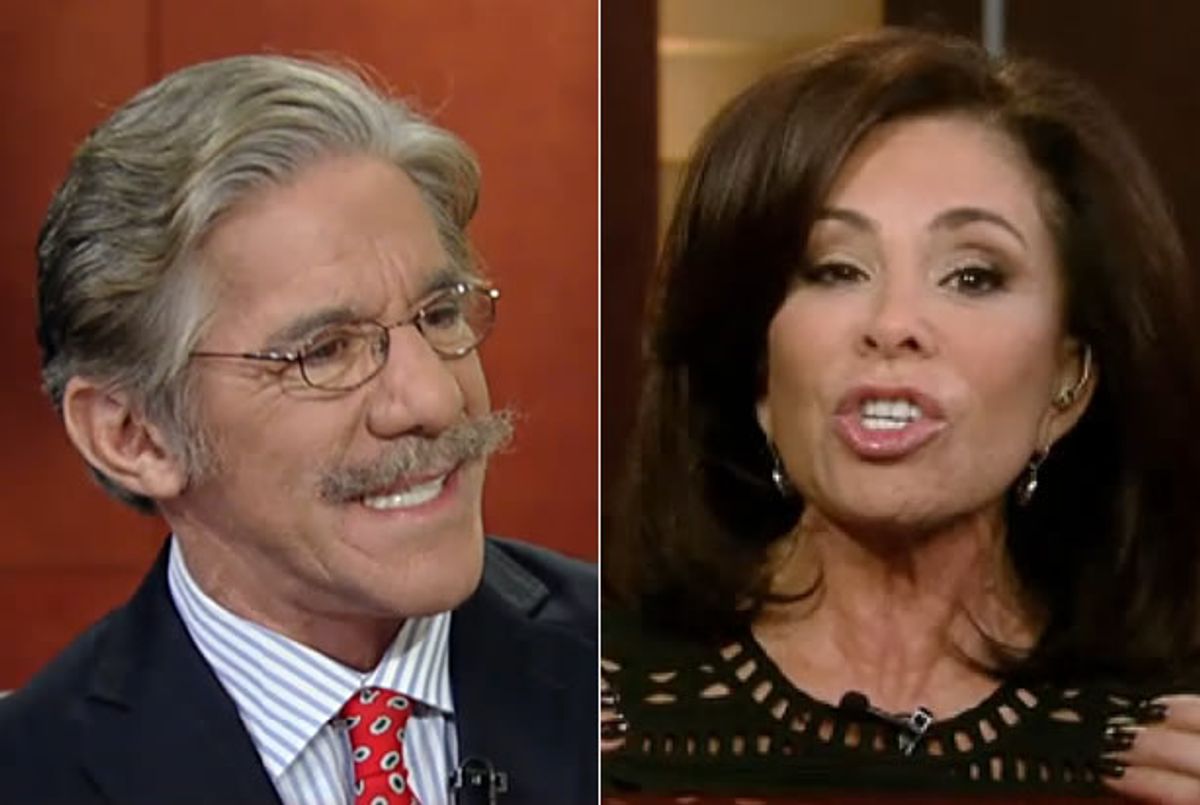 "Fox & Friends" on Friday hosted what began as a discussion, but turned into a shouting match between Geraldo Rivera and Judge Jeanine Pirro. The pair were discussing the Wednesday's mass-shooting in San Bernardino, and Elisabeth Hasselbeck wanted to begin the conversation by talking about Syed Rizwan Farook and Tashfeen Malik's marriage.

"This was a radicalized relationship," Hasselbeck said, but that conversation was instantly derailed.

Pirro replied with a rambling broadside against Islamic extremists, before finally turning to the true culprit in the mass-shooting -- political correctness. "The neighbors said [the shooters] looked like Muslims, they were bringing in boxes, and we didn't want to say anything because we didn't want to be politically incorrect. That's hogwash! We're in a new time right now."

Just to make sure Pirro's point is clear -- she's contending that people who look like Muslims carrying boxes into their own homes are engaging in an activity suspicious enough to warrant contacting the authorities in these "new times."

The panel moved on to discussing "fiance" K-1 visa requirements, with Steve Doocy asking whether "in the world we live in today," the United States can continue to have "these visa programs which seem really wide open."

Geraldo Rivera replied that "they are, but the only reason I hesitate is that I can't help but remember the movie 'Green Card,'" adding that many "marriages of convenience" are intended "to defraud immigration services." However, he also stated that "if you're going to stop these from the Muslim world, you've got to stop it for everybody."

"I come back to the haunting fact," he continued, "that whether it's Boulder or Aurora or Sandy Hook or Tuscon, home-grown extremism is the issue, and we have to choke it off wherever we can."

Doocy connected the San Bernardino mass-shooting with the Syrian refugees, saying that the Obama administration wants to allow in 10,000 vetted refugees, but Tashfeen Malik, the female shooter, "she was vetted!"

Pirro agreed, noting that "as I've said before, there's no way to vet a Syrian refugee. What are you going to do, call '1-800-ASSAD' and say 'We have this guy "Mohammad" here, he says that he's clean, is he a terrorist?'" She added that while she agreed, in principle, with Rivera's call to vet all immigrants from all countries equally, "let's not be stupid here -- the people who are killing us, who are so dead-set on killing us that they're killing themselves, are the Muslim jihadists."

"What's happening is the Muslim jihadists want to kill us. If we ignore that, we are suckers," she added.

Rivera noted that there are other people trying to kill Americans, pointing to non-Muslims mass-shooters who benefit from the fact that "the gun store is open 24 hours a day," at which point Pirro exploded. "That's because of the Second Amendment!" After much cross-talk, Hasselbeck sent Rivera and Pirro back to their respective corners. "Are we really embracing the view that it all comes down to guns?" she asked, citing a Daily News cover that equated the crimes of Muslim terrorists to white Christian shooters and the NRA's Wayne LaPierre:

"But that's a mental health issue, not a gun issue," Hasselbeck said, apparently unaware of the fact that she just suggested that the San Bernardino shooters had a clean bill of mental health.

"How about Stalin?" Rivera asked.

"Let's talk about America," Pirro said by way of response. "They're coming here to kill us. Don't use guns or the NRA or anything else to stop me from protecting myself."

Doocy interjected with what is apparently Fox News' new favorite talking point. "They say we need more gun laws, but gun laws don't stop pipe-bombs, and this house was an IED factory."

Watch the entire argument below via Fox News.