Liberals are not soft on, sympathetic towards, or defensive about Islamic terrorism

How on earth did Christian terrorism and Islamic terrorism start getting viewed as partisan issues? 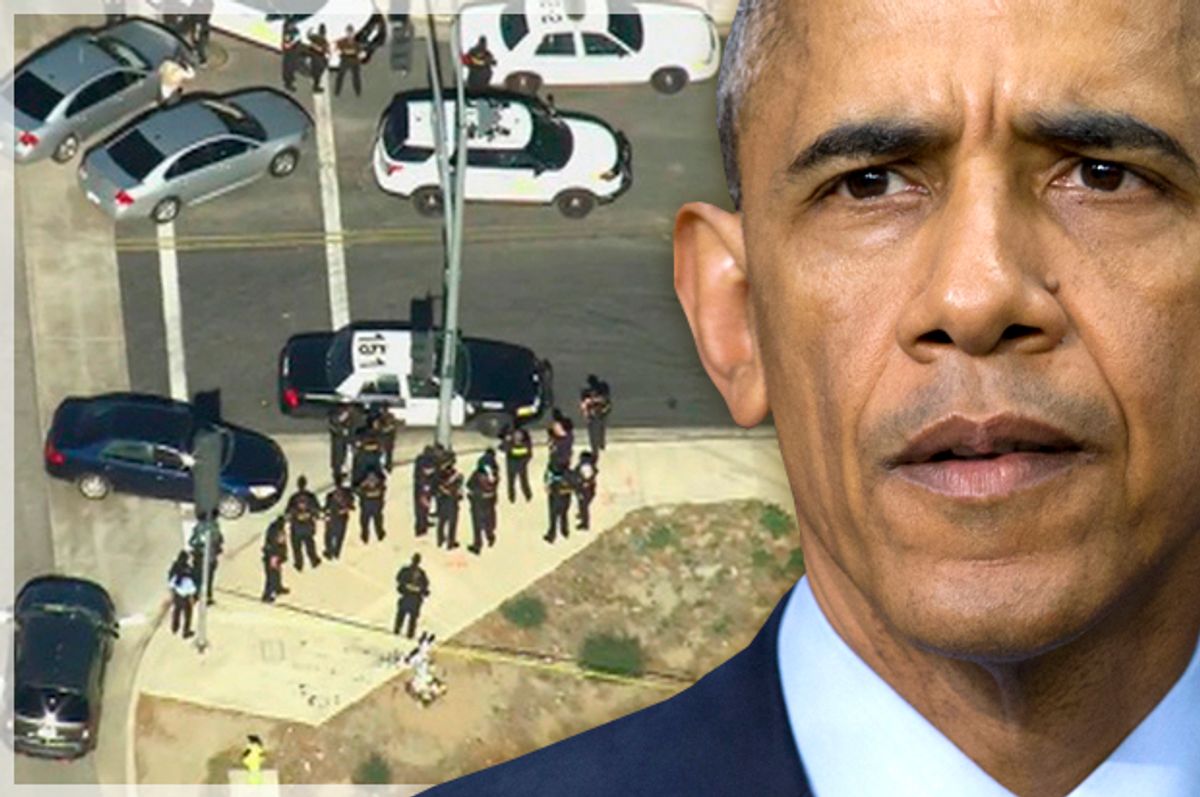 The FBI has announced that it's investigating the San Bernardino shooting as a terrorist incident. Newly uncovered evidence suggests that Syed Rizwan Farook and Tashfeen Malik had a religious terrorism motive behind their massacre at Farook's own holiday office party at the Inland Regional Center on Wednesday. While witnesses say Farook left the party, possibly in a tiff, and returned with his wife to shoot the place up, killing 14 and injuring 21, it's also impossible to argue this was solely an impulsive act of rage (as most mass shootings still are). They returned with a massive arsenal and were found to have been building pipe bombs at their home, all suggesting something more than a desire to be featured on the show "Doomsday Preppers."

Now the evidence suggests that Farook was quietly getting radicalized, again pointing to religious terrorism, perhaps with a dollop of workplace resentment, as the motive.

If so, that means that this country experienced what appears to be two religiously motivated terrorist  attacks in the span of a week: The San Bernardino shooting and the Colorado Springs shooting at Planned Parenthood. But in a demonstration of how bizarre modern American politics really are, these two nearly identical shootings somehow are seen as entirely different in the context of partisan politics.

To wit, conservatives are extremely defensive about the Planned Parenthood shooting, but clearly see it as a political "win" if the San Bernardino shooting was rooted in Islamic terrorism. Even more bizarrely, there's a sense, particularly in right wing circles, that the opposite is true for liberals: That we somehow have reason to be on the defense if this shooting, as it looks like it will be, is an act of Islamic terrorism.

Right now, most conservative pundits and politicians are avoiding openly linking liberalism with the religious ideology that may have motivated the San Bernardino shooting, likely because it's still a bit too raw and mostly because there's not enough information yet to be certain about the shooters' motives. (The one exception is the dog-piling of the Council On American-Islamic Relations, an anti-racism organization, who many conservatives shamelessly characterized as pro-terrorism.) But a quick perusal of social media shows that the base is already going there, blindly assuming that your average liberal American somehow has a deep love of the radically fundamentalist version of Islam that inspires and fuels this kind of terrorism.

It really is only a matter of time before the pundits and politicians start to pander to that.  In fact, Chris Christie has already stuck a toe in, claiming that Obama's response to the attacks was to "wring his hands." The implication is that Obama is somehow defensive about Islamic terrorism in the same way that conservatives are defensive about Christian terrorism.

We've been down this road before. After the Paris attacks, accusing liberals of somehow being protective of or defensive of the teachings of ISIS became a popular talking point on the right. Republicans harped endlessly on the Democratic candidates for avoiding the inexact and needlessly provocative term "radical Islam."

It's part point-scoring, and part projection. After all, conservative Christians continue to blindly endorse radical rhetoric and beliefs that lead to Christian terrorism of the sort that we saw at Planned Parenthood, so they assume that the "other" side has a similar problem, just with Islam instead of Christianity.

Sadly, it's not just conservatives who make this asinine assumption, either — there's a certain arrogant, pseudo-liberal type of atheist who also seems to think that liberals are somehow more sympathetic to or protective of Islamic terrorism than Christian terrorism. After the Paris attacks, Bill Maher, while grasping that it's probably unwise to bomb blindly, still sneered, "It was probably not the Amish," as if liberals were suggesting otherwise. Sam Harris went even farther, echoing Ted Cruz's rhetoric about how Christian terrorism isn't even really a thing, and assuming that the only reason liberals support the Syrian refugees is that we're blind to the threat of Islamic terrorism.

This has gone on long enough. It's time to say it straight: Just because conservatives believe there's some kind of global battle between Christianity and Islam doesn't mean that liberals have to agree, much less that they take the "Islam" side of that equation. On the contrary, most liberals see fundamentalist Christianity and fundamentalist Islam as categorically the same and categorically illiberal in their shared opposition to feminism and modernity.

This goes double when it comes to the fringe actors in either faith who become radicalized and turn to violence to impose their theocratic views on the unwilling. Liberals understand that there are theological and political differences between the different kinds of radical fundamentalism that lead to terrorism, but we are keenly aware that people who pick up a gun in the name of God have more in common with each other than they do with the rest of us.

What liberals object to is the conservative tendency to erase all distinctions between the relatively few Muslims around the world who have violent views and the majority of Muslims who, whether they are conservative or not, do not agree with ISIS or Al Qaeda's distortion of Islam. Imagine how Christians would feel if liberals blamed Christianity, categorically, for the attack on Planned Parenthood. They would be angry and they would have a right to be. After all, a lot of Christians are liberal and believe abortion is a perfectly acceptable choice. And many others may disapprove of abortion, but they think it should be legal and they generally support Planned Parenthood's overall reproductive health care mission. There are even some Christians who are anti-choice but disapprove of the heated rhetoric that fueled this attack. Just as it's important to maintain these distinctions when talking about Christianity, it's equally important to keep these distinctions in mind when talking about Islam.

There's nothing in that logic that suggests that liberals have some secret googly-eyes for demagoguing radical Muslim fundamentalists, anymore than we love Pat Robertson. On the contrary, we tend to see them as basically the same kind of misogynist, homophobic authoritarians who hide behind God to get their way. To suggest otherwise is not just dishonest, but irresponsible, since it can hinder the very diplomatic efforts we need to keep people alive.