In its second season, Damon Lindelof turned his mediocre drama into one of the best shows on TV 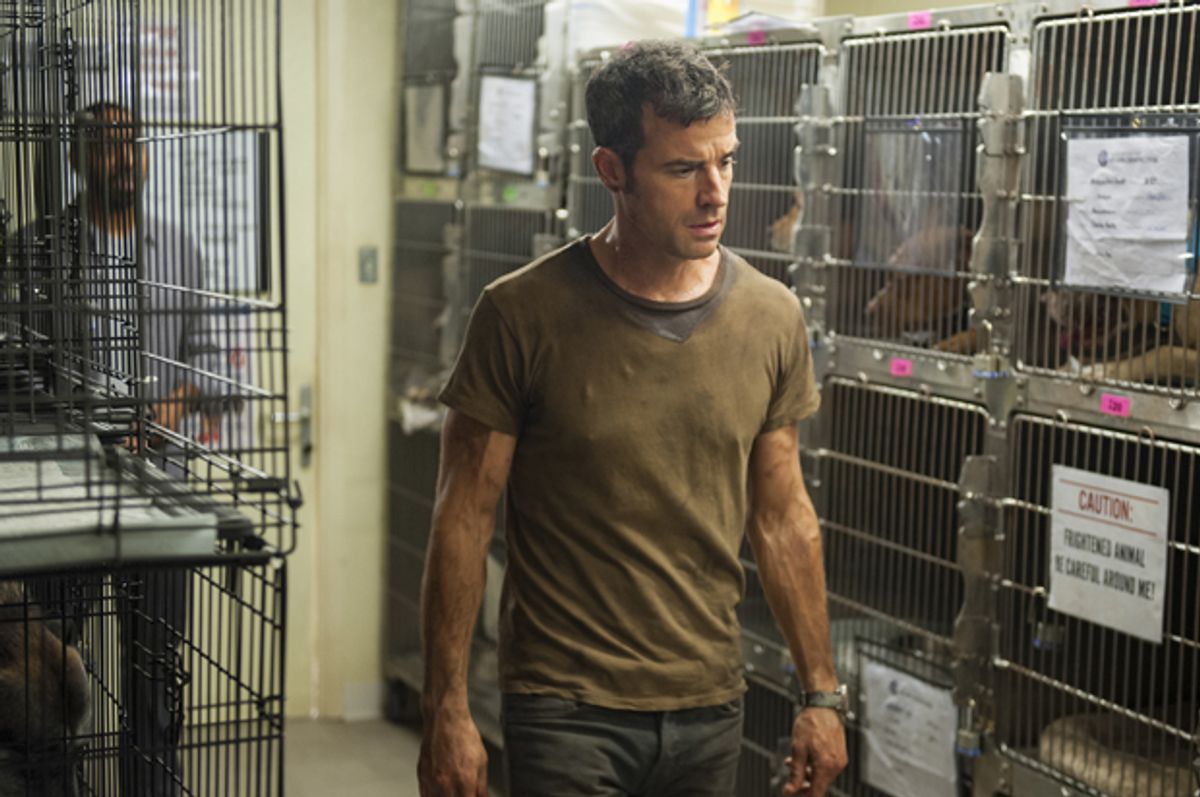 The eighth episode of this season of “The Leftovers” starts with a dead man. Kevin Garvey (Justin Theroux) takes poison and collapses, convulsing, at the end of episode seven, as part of a desperate attempt to silence a voice in his brain. It looks like he died—because he did die, in that his heart stopped and he stopped breathing. In “International Assassin,” he comes to—naked and submerged in a bathtub. He surfaces, gasping, to discover that he is in a hotel room he has never seen before. If he has not died, the world is at least transformed. The TV is playing static and won’t turn off. Some of his own clothes are in the closet, under a placard that reads, “Know who you are, and then adorn yourself accordingly.” When he opens the door, the man from room service tries to kill him. And throughout, the opening bars to the unsettling, show-stopping “Va, pensiero”—composed by Giuseppe Verdi—scores Kevin’s engagement with this fraught dreamscape.

The effect is difficult to forget. In Kevin’s wild search for meaning, the music reflects the layers of confusion and clarity that come with any unpleasant awakening—whether that’s a bathtub coming-to or a spiritual epiphany. (In Kevin’s case, it’s probably both.) The music haunts him, and us, throughout the episode, to its incredible, difficult-to-explain conclusion.

“International Assassin” is an unbelievably amazing episode of television. “Va, pensiero” appears in act three of the opera “Nabucco,” and “International Assassin,” placed late in the second season, is a similar crescendo to a show-stopping number. And for me, it came unexpectedly. I did not care for season one for the show, though I was able to find merit in some episodes; season two has made me a convert. It inspires passion in its fans, because although other shows are good, “The Leftovers” is vital. It is a weekly reckoning with what it means to be a person, which often means reckoning with pain, despair, loss and meaninglessness. It’s not an easy watch, but in some ways, the difficulty of the show is what is so rewarding about it—as if, finally, there is a show that understands how awful it can feel to be a human being in the world. We don’t live in a world with “the Departure,” as the characters on “The Leftovers” call it, but we all have our losses and our burdens and our griefs. Less than trying to explain the mystery of why both terrible and wonderful things happen the way they do, “The Leftovers” tries to relate how humans deal with unanswered questions and missing pieces.

It’s done that from the start. But the second season does it much, much better. Having watched the finale in advance of its broadcast tonight, I can say confidently that this is a season of television worth investing in. But more than that, “The Leftovers” is an extraordinary case study for how to improve a show. Studios and networks have been fixated on quantity more than quality in the years since the Golden Age of Television was proclaimed to have begun. As is discussed over and over, by critics including myself, this has led to a glut of shows that are good enough, but few that are truly brilliant.

Showrunner Damon Lindelof has been quite candid about the mistakes of season one, such as in this interview with Alan Sepinwall of HitFix:

I was really depressed while writing the first season of the show … I was mainlining Cormac McCarthy's "The Road," and "Gimme Shelter," and all of these post-apocalyptic stories. It’s like, "How can I take the feeling of these people scrounging for Coke cans and sardines and a burnt sky? How can I take that feeling and just put that feeling in the world that we know?  Can I create an existential apocalypse?" And of course, I probably also should have been thinking, "Why would anybody want to watch that?"

The answer is that there is a universality to struggle and suffering; but it has taken the show a while to find it. In the first season, the struggles of the suburban town of Mapleton were irritatingly niche—both culturally insular, and as I wrote at the time, disappointingly non-diverse with respect to either religion or race. Depression seemed to be advanced as a superior state of being; the terrible practices of the show’s cult, the Guilty Remnant, seemed to be condoned. There was a bleakness to the show that defied enjoyment—a despair that went past curiosity, or faith, or most importantly, the occasional experience of joy.

It’s almost as if Damon Lindelof and the rest of the crew read my notes and then responded to every single one of them (which, I should clarify, is possible, but highly unlikely). The Guilty Remnant is heavily backgrounded in season two. The show finally introduced a family of color, the Murphys, and moved from the claustrophobic town of Mapleton to Jardin, Texas, where people from all faiths, from all over the country, are looking for answers. It honed in on a specific mystery, introduced in the season two premiere, and it has found a way to build that story across perspectives (including a crazy-brilliant opening, in the premiere, that centers on a cavewoman trying to raise her baby). It has truly pushed the envelope, and in the process, Lindelof has brushed off and employed some of the skills he honed on “Lost”—overlapping stories, a quest for answers, sustained suspense and occasional encounters with the supernatural.

And I think it has finally found that ring of universality—that crucial component for a story that is reaching so grandly. In “International Assassin,” for example, the hotel of Kevin’s wanderings could be purgatory, or the afterlife; the light at the end of the tunnel, or the dreamlike state of a subconscious on the brink of death. But that hotel outside time and space where Kevin journeys is a place we’ll all be going, eventually. And if you are a viewer who hasn’t, you know, completely and totally come to terms with your own mortality, then Kevin’s struggle is your own, even though he is a distinct and flawed individual.

To wit: “Va, pensiero” comes from the opera “Nabucco,” which tells the story of the Jewish exiles far from their home during the Babylonian Captivity, after the destruction of the first temple. Verdi wrote this opera shortly following personal devastation—the deaths of his two very young children, just a year apart, and then the death of his wife shortly thereafter. It is part of the mythos of the composer that his first great work followed this immensely tragic time in his life; Verdi did not write the words to “Va, pensiero,” in which the exiles mourn their lost Zion, but the sentiment of loss and despair is evident in the music, which begins with almost disjointed passages of aggressive fortissimo and resolves into pastoral chorus. The vocal parts sing the same notes for nearly the entire song, except for a few choice moments of harmony. It is music that is about loss, and it is music that was created through loss. The same is true of “The Leftovers,” I think, which has managed to find a path through failures and Lindelof’s own depression to a well-crafted and humane second season. To put it simply, the show has found a way to sing.