Brie Larson is right to reject the "It Girl" label: Ask every previous "It Girl" who is no longer "It" 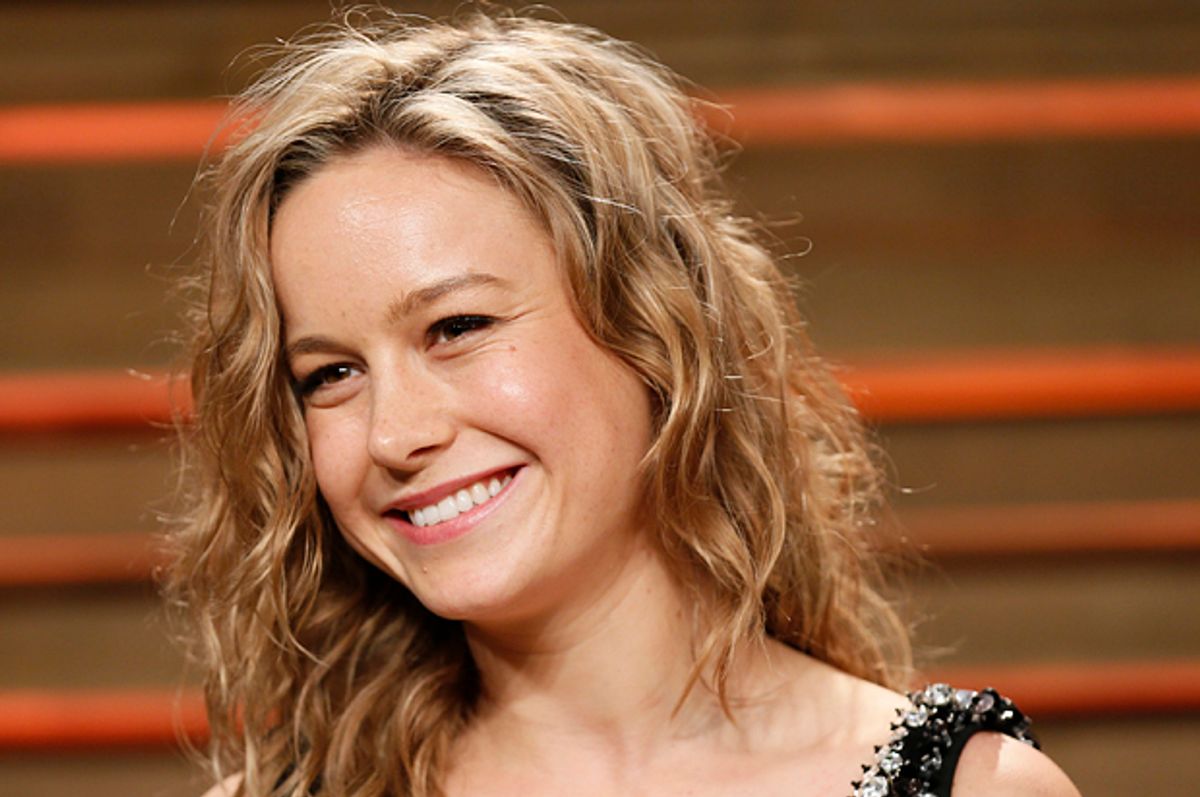 Brie Larson doesn’t want to be your “It Girl.”  In a recent interview with CBS Sunday Morning, the up-and-comer is currently earning major Oscar buzz for the indie survival drama “Room,” poised to be the front-runner for Best Actress. Larson told CBS’ Tracy Smith that she’s uncomfortable with being called “the girl of the moment”—as Smith put it. “But what is ‘it’? There is no ‘it!’” Larson said. “And who was ‘it’ before ‘it’? And when does ‘it’ go away? When did I get ‘it’? Who’s going to take ‘it’? It’s so weird.”

If you’re unfamiliar with the term, the phrase “It Girl” emerged as a means to describe a woman possessing an ineffable appeal; you might not know exactly what “It” is, but the idea is that you know it when you see it. As defined by novelist Rudyard Kipling, “It isn't beauty, so to speak, nor good talk necessarily. It's just ‘It’.” The “It Girl” entered the popular vernacular following the hit 1927 romantic comedy "It," starring silent film megastar Clara Bow—the first girl officially stamped with the label. Novelist Elinor Glyn—whose book the film was based on—described Bow’s appeal as such: “With ‘It,’ you win all men if you are a woman and all women if you are a man.”

Glyn’s definition may recall the famous “Cool Girl” trope—as espoused by Gillian Flynn in "Gone Girl": “a hot, brilliant, funny woman who adores football, poker, dirty jokes, and burping, who plays video games, drinks cheap beer, loves threesomes and anal sex, and jams hot dogs and hamburgers into her mouth like she's hosting the world's biggest culinary gang bang while somehow maintaining a size 2.” But the point about the “It Girl” is that what we about her is intentionally vague—meaning that it can always change. In fact, what we like about her now may be exactly what we dislike about her later.

I find it telling that Larson has been billed as the “new, lower-key Jennifer Lawrence,” precisely because it shows what’s so wrong about the entire concept: There can only be one. For a long time, J-Law has occupied the de facto “It Girl” throne in Hollywood, and in order for Larson to ascend to her position, Lawrence has to abdicate. But in the case of Brie Larson vs. Jennifer Lawrence, it’s not so much a replacement as a reactionary refinement of what we liked but didn’t like all that much about the throne’s previous occupant. We loved Lawrence for being boisterous and real, until we didn’t, and Larson’s success is intended as a corrective: She’s the “It Girl” for our Netflix and chill era.

These are, of course, false dichotomies: Jennifer Lawrence might talk about her love of pizza and doing shots before award shows, but she shares more in common with Brie Larson than what might divide them. They’re both accomplished former child stars who got their start on family sitcoms—Lawrence on “The Bill Engvall Show” and Larson on the short-lived Bob Saget vehicle “Raising Dad.” They both made a name for themselves by balancing acclaimed indie work with breakout roles in studio hits: Jennifer Lawrence got an early Oscar nod for “Winter’s Bone” and followed up with “The Hunger Games” and "X-Men" franchises, while Larson balanced key supporting roles in “Trainwreck” and “21 Jump Street” with critical recognition for the SXSW hit “Short Term 12.” Hell, the two are almost exactly the same age.

This happens seemingly every Oscar race—with a pair of actresses in contention being given the Britney vs. Christina treatment, pitted as natural rivals. In 2013, it was Anne Hathaway and Jennifer Lawrence—both Academy Award winners for their respective roles in "Les Miserables" and "Silver Linings Playbook"—and 2014 witnessed the birth of inevitable comparisons between Lupita N’yongo and Jennifer Lawrence. At the time, Crushable’s Alexis Rhiannon wrote: “Lupita doesn’t pretend she isn’t prepared, or didn’t expect this. … She makes no effort to hide how thrilled and excited she is, but she remembers to thank everyone, because this was no accident.”

What’s hilarious is that these were the same traits people derided Anne Hathaway for just a year earlier. The actress had all but dominated 2012: In addition to playing Fantine, she was the only part of “The Dark Knight Rises” everyone could agree on liking, and Hathaway even got official presidential approval for the performance. “I got a chance to see 'Batman,' and she was the best thing in it,” Barack Obama said about Christopher Nolan’s divisive final entry in the Batman trilogy. She conquered Hollywood by working her ass off and showing us that hard work.

While crowning the Year of Hathaway with speeches at the Golden Globes and the Oscars for her “Les Mis” performance, Hathaway was polite, poised, and prepared—if maybe a bit overly so. The backlash to that eagerness got Anne Hathaway dubbed a “desperate theater kid” and was so virulent that she all but dropped off the face of the earth for three years (aside from an underwritten role in Nolan’s “Interstellar”). Being irrationally hated by half of America clearly takes its toll. But now that Hathaway is back in the limelight again following Nancy Meyers’ sleeper hit “The Intern,” we’ve decided that we actually never hated her that much all along. Here’s how she was described in a recent profile from Refinery29:

“She’s a pro at skillfully shutting down tasteless interview questions, as she did when Matt Lauer opened with a weirdly slut-shamey reference to an upskirt paparazzi photo of her in 2012. These qualities might not be as meme-worthy as Jennifer Lawrence tripping at the Oscars, being witty after tripping at the Oscars, flipping her middle finger backstage at the Oscars, or riding a jet ski with Amy Schumer. But they certainly exude another kind of cool—the kind that comes with striving for excellence and not having to apologize for it.”

I’ll leave you a moment after you read this to scream for awhile. The biggest problem with the “It Girl” isn’t that the reasons we like female actresses are frustratingly arbitrary and constantly changing. This is because we only know who “It” is by who is not it. We like Anne Hathaway right now because don’t like Jennifer Lawrence anymore, until we do like Jennifer Lawrence again and decide we don’t want to hang out on the couch with Brie Larson; we just want a bestie we can go clubbing with. Meanwhile, we’re allowed to like Chris Pratt, be Gosling girls, and swear our blood allegiance to Joseph Gordon-Levitt. The fact that we find one man cool and desirable is allowed to stand on its own without being an implicit diss on all other eligible fantasy males.

The “It Girl” label is not only harmful for the women we decide are not “It”—like the world’s longest, most confusing game of tag—but the women who are suddenly tapped by everyone’s unrealistic, impossible expectations. Brie Larson will probably win Best Actress; she will probably accept this award without tripping onstage, confirming that—yes—she is not Jennifer Lawrence, and for some, that she is—thus—better than Jennifer Lawrence. But in receiving the highest honor in your field, any actor’s hope is to be judged on their own merits; they want to win because they earned it, not because someone else lost.

I’ve written before that the “It Girl” game is inherently unwinnable, and frankly, I’m tired of writing it. I’m sick of a culture that builds women up just to tear them down and that treats women as if they’re endlessly disposable and recyclable. I’m sure Brie Larson will be applauded for calling out that culture—until we decide that we’d rather her not speak up and deem her ungracious for not unblinkingly accepting every bit of double-edged praise thrust upon her. Being the “It Girl” is weird—especially when you didn’t ask to be “It”—but it’s not nearly as strange as the way our society treats women.