Meghan Trainor must be stopped: The Grammys inexplicably nominated her for Best New Artist

Trainor is neither "best" or "new" anything—and she's up against Courtney Barnett, who's had a breakthrough year 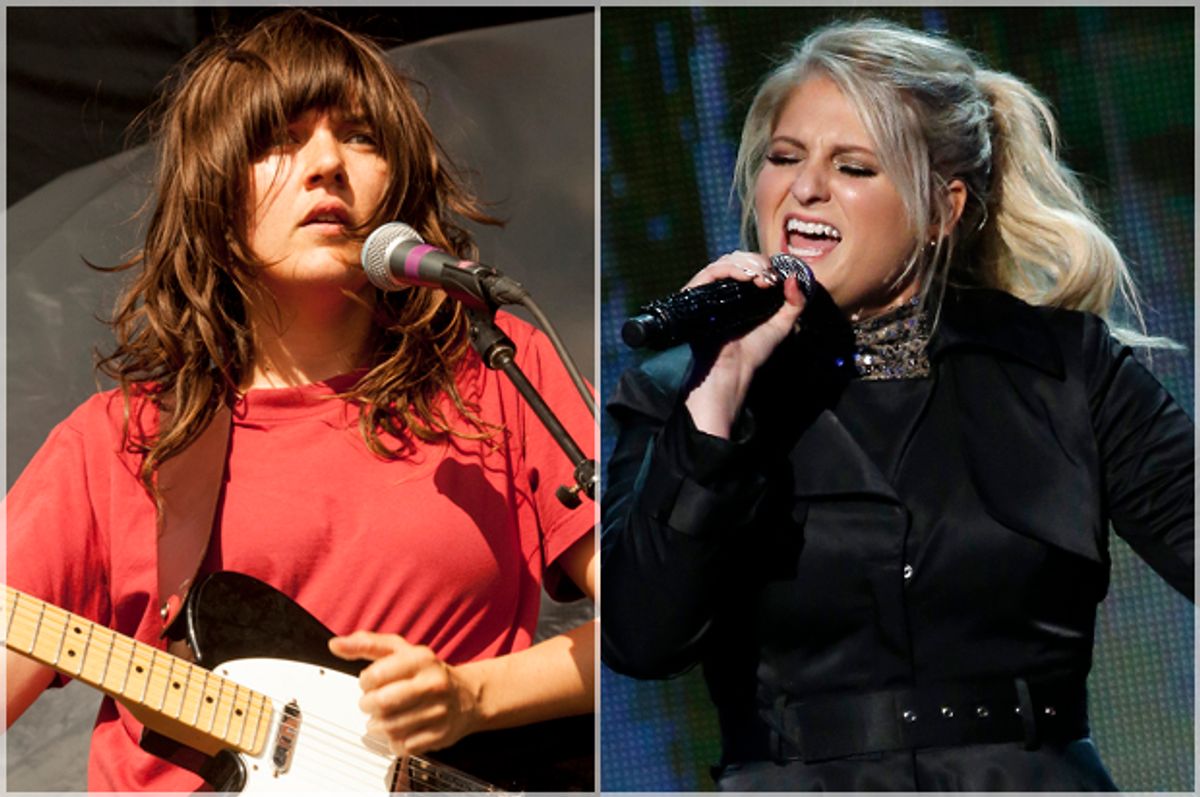 Nominee lists are always, by their nature, a mix of disparate things. But just when it looked like the Grammys had come to its senses with most of its nominees this year, it creates a very weird juxtaposition: Putting one of the freshest figures in indie rock, Courtney Barnett, alongside one of the most annoying and unoriginal singers in history, Meghan Trainor. Both show up in the Best New Artist category, a place where the Grammys don’t exactly have a great batting average in the first place.

To make it even more bewildering, Trainor was nominated last year for her song, “All About That Bass.” Even overlooking that, and the fact that her first album came out in 2009, irritating songs like “Dear Future Husband” and “Lips Are Movin’,” along with one of the most mannered vocal styles imaginable, should have disqualified her first.

Barnett is the drowsy-voiced Australian who combines some of the best qualities of Bob Dylan, early Liz Phair, and Cat Power. Her LP, “Sometimes I Sit and Think and Sometimes I Just Sit,” builds on her earlier EPs that showed her capable of low-key melancholy (“Avant Gardener,” “Don’t Apply Compression Gently”): The new album is more forceful (“Aqua Profunda!,” “Dead Fox”) without losing her essential skepticism and reserve.

Over all, Barnett is one of the most distinctive musicians to show up on the Best New Artist list in years: She’s not only a gifted singer, she’s got a knack for memorable melodies and woozy, Velvet Undergroundish instrumentation that’s both detached and full of subdued feeling. There is nothing, by contrast, subdued about Megan Trainor.

The category’s other three nominees – James Bay, Sam Hunt, and Tori Kelly – are the usual Grammy fare, a mix of slickly commercial and blandly earnest.

But Trainor is the one who must be stopped. If she wins, a whole generation could be scarred as endless peppy, retro chanteuses roll off the millennial assembly line.

I’d offer a “let the best artist win” here and just watch the votes fall where they may. But the Best New Artist category is a strange one. There have been some substantial winners – Amy Winehouse, Adele, Bon Iver – as well as some real lightweights. Evanescence beat 50 Cent and Fountains of Wayne in 2004, Maroon 5 (!) beat Kanye West the year after, Fun. beat Alabama Shakes in 2013, and Macklemore & Ryan Lewis beat Kendrick Lamar in 2014. Sam Smith was the big winner last year. How many of those Best New Artists went on to best their competition, really?

Otherwise, the Grammys did better than usual this year. Neither Kendrick Lamar (11 nominations) nor The Weeknd (seven) are surprising, but they’re both original artists capable of both toughness with vulnerability and they deserve to be all over this. The three nominations help ratify D’Angelo’s return from dormancy with his first album since 2000. (“Black Messiah” deserves to win Album of the Year, but seems to have been left off the list of nominees.) And it’s good to see names like Wilco, Tame Impala, Flying Lotus, and Bjork, even if Sleater-Kinney, Belle & Sebastian and Real Estate should be somewhere on those lists as well. (The Grammys have never been particularly sharp in dealing with indie rock.)

But let’s go back to Meghan Trainor for a minute. Much of the discussion around her has to do with her gender politics. She’s a champion to some for the body-positive lyrics of "All About That Bass," but at the same time, her song “Dear Future Husband” has lines like “I’ll be the perfect wife, buying groceries, buy-buying what you need.”

“All About That Bass,” Music.Mic writes, has a mixed political message as well. “By simultaneously claiming a feminist mantle and advocating an anti-feminist agenda, Trainor has become a threat to all the gains that pop music has made in feminism recently.”

Well, maybe. But it’s not necessary to figure out where Trainor falls on the feminist spectrum to find her music unpleasantly perky. Let me repeat: She must be stopped. And it's hard to think of a better musician than Courtney Barnett to do it.