President Obama is doing something difficult in the aftermath of a terror attack: he's pleading for rationality 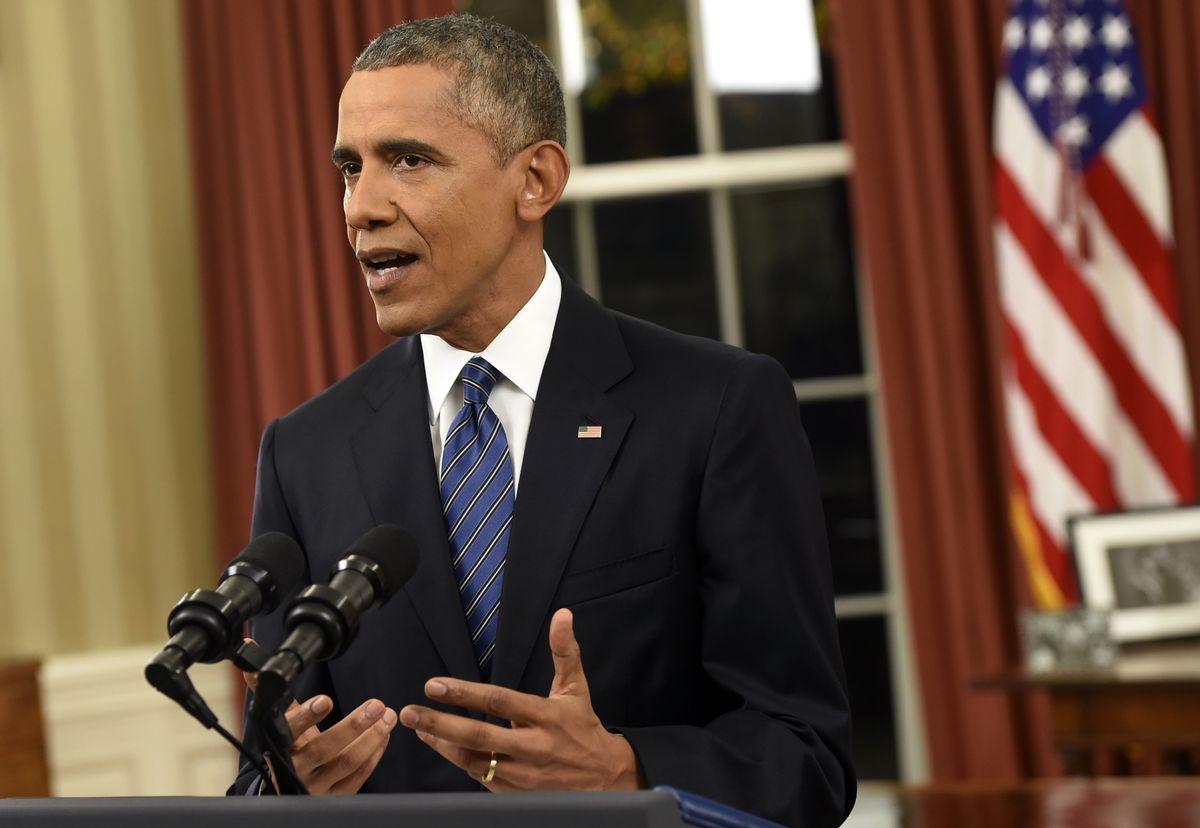 President Barack Obama addresses the nation from the Oval Office at the White House in Washington, Sunday night, Dec. 6, 2016. In a rare Oval Office address, Obama vowed the United States would overcome a terror threat that has entered a "new phase" as he sought to reassure Americans shaken by recent attacks in Paris and California. (Saul Loeb/Pool Photo via AP) (AP)
--

After the Paris terrorist attacks, President Obama gave a joint press conference with French president François Hollande in which he made a direct plea to the American people to be thoughtful and prudent in how they chose to react to the gruesome spectacle of Islamic State violence. “As Americans, we all have a role to play in how we respond to threats,” he said. “Groups like ISIL cannot defeat us on the battlefield, so they try to terrorize us at home – against soft targets, against civilians, against innocent people. Even as we’re vigilant, we cannot, and we will not, succumb to fear. Nor can we allow fear to divide us – for that’s how terrorists win. We cannot give them the victory of changing how we go about living our lives.”

A couple of weeks later, Obama was again in the position of speaking directly to the American people about terrorism, this time about the attack in San Bernardino, which appears to have been inspired by the Islamic State. And, once again, he framed the issue in terms of how we react to attacks of this nature. But this time he discussed it in the specific terms of what the Islamic State – not “terrorists,” broadly defined – hopes to accomplish, and how we should avoid falling into the traps it sets. Here’s what the president said last night:

We should not be drawn once more into a long and costly ground war in Iraq or Syria. That’s what groups like ISIL want. They know they can’t defeat us on the battlefield. ISIL fighters were part of the insurgency that we faced in Iraq. But they also know that if we occupy foreign lands, they can maintain insurgencies for years, killing thousands of our troops, draining our resources, and using our presence to draw new recruits.

We cannot turn against one another by letting this fight be defined as a war between America and Islam. That, too, is what groups like ISIL want. ISIL does not speak for Islam. They are thugs and killers, part of a cult of death, and they account for a tiny fraction of more than a billion Muslims around the world – including millions of patriotic Muslim Americans who reject their hateful ideology. Moreover, the vast majority of terrorist victims around the world are Muslim. If we’re to succeed in defeating terrorism we must enlist Muslim communities as some of our strongest allies, rather than push them away through suspicion and hate.

Obama is correct that the Islamic State very much desires an American-led intervention on the ground. The group is guided by end-times prophecies that envision a final, apocalyptic showdown between the true followers of Islam (itself) and the West. As Brookings scholar William McCants writes in his book “The ISIS Apocalypse,” the group “fought ferociously to capture” the strategically useless Syrian village of Dabiq in 2014 because “its members believed the great battle between infidels and Muslims would take place there as part of the final drama preceding the Day of Judgment.” ISIS uses these prophecies and symbolic victories to draw in foreign fighters who think they’re signing up to slug it out with the West and hasten the end of the world.

The president’s message here is simple: don’t give the terrorist group what it wants. Don’t legitimize it by treating it as anything more than the ideological rot and perversion than it is. Don’t build it up in the imaginations of its adherents and lend credence to its insane worldview. The goal is to destroy ISIS, so the best strategy is one that does the group the fewest favors.

As for that strategy, Obama is taking heat from Republicans and pundits for sticking with the anti-ISIS plan as it currently exists. MSNBC’s Joe Scarborough, a reliable extruder of the center-right conventional wisdom that dominates national security politics, complained that Obama’s post-San Bernardino speech offered nothing “new” in terms of military strategy. “He’s got to give Americans a reason to believe that he’s not just going to stay hunkered down in his ideological bunker and continue to ignore this threat.” (Apparently we’re at a point where several thousand airstrikes on ISIS targets over the last year or so count as “ignoring” the Islamic State.) The focus here is more on politics than on what is actually in the national interest.

One can and should be frustrated at the current strategy. It’s being oversold politically, it’s experiencing steady mission creep, and it is of dubious legality. But, for all its weaknesses, the alternatives to the current strategy – in particular the growing clamor to insert a large number of American forces – seem much worse. “Attacking from the air will degrade the Islamic State but will not destroy it,” McCants writes in “The ISIS Apocalypse.” Arming Sunni tribes “doesn’t guarantee they’ll fight against [ISIS].” The political toxicity in Iraq’s sectarian government and the spiraling chaos of the Syrian civil war are both fueling ISIS, and they’re nowhere near any sort of resolution. Sending in American troops to do the fighting “would enflame public opinion at home and abroad, ensuring that the United States would not be able to see its mission through.”

It’s a nasty fight with no options for a quick and clean resolution, and the Islamic State’s goal is to apply pressure – in the form of terrorist violence – on its geopolitical adversaries to goad them into action. Obama is doing something very unpopular and difficult in the aftermath of a terrorist attack: he’s pleading for rationality and warning against politically satisfying policy options that stand a good chance of making a bad situation worse.