Republicans react like silly children to the San Bernardino massacre, showing why we need grown-ups like Obama in charge

GOPers can't help but respond like kids to the complex, serious threat of ISIS and terrorism 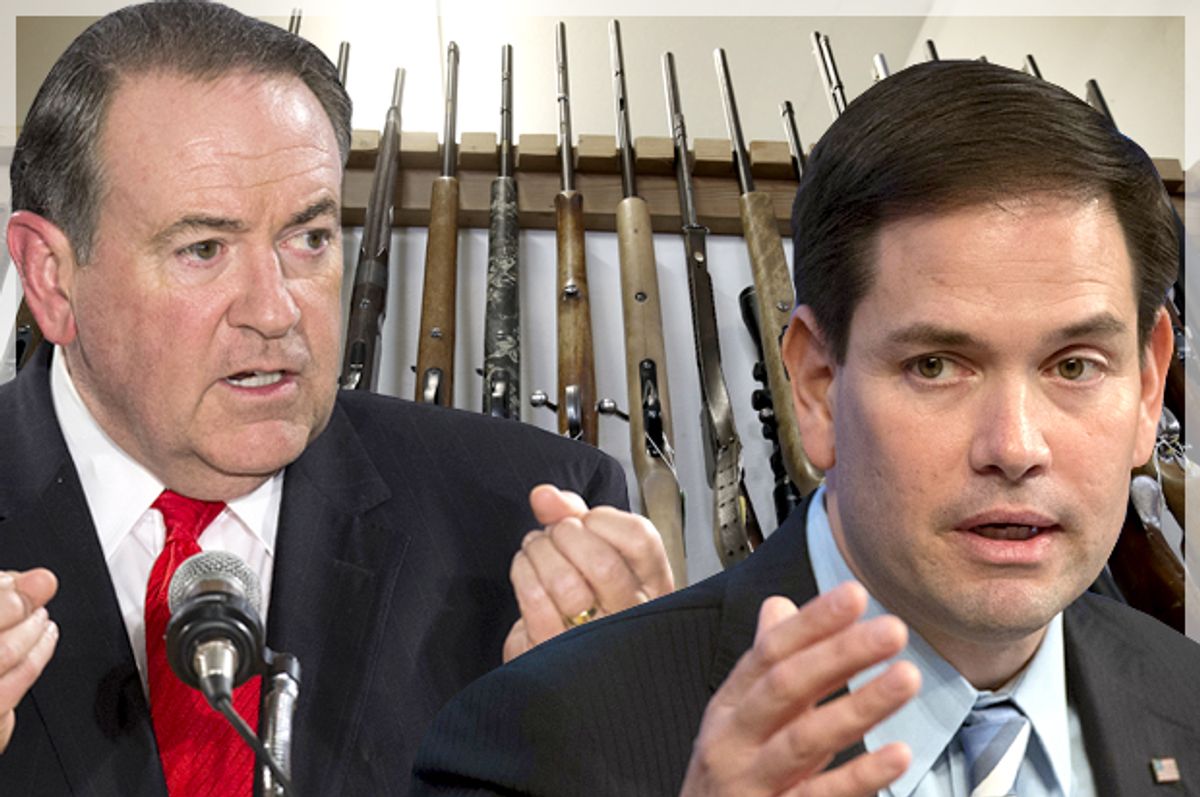 Over the weekend, the political establishment really started to register reactions to the horrific shooting in San Bernardino, California, and the process was a chilling reminder that the Republican Party has completely abdicated any responsibilities towards coherence, intelligence, or maturity in favor of just pressing a bunch of right wing buttons over and over again.

We really are living in an age where the Democrats are the Grown-Up Party and the Republicans are little more than a bunch of mini Rush Limbaughs, spouting off base-pleasing talking points that are void of any real content and often don't even fit together in a logical fashion.

This was most obvious when it came to this issue of gun control. As President Obama laid out in a major speech Sunday night, "we’ve become better at preventing complex, multifaceted attacks like 9/11" and so "terrorists turned to less complicated acts of violence like the mass shootings that are all too common in our society."

ISIS might even be taking its inspiration from radical anti-choicers in America, who long ago learned that you don't need to organize terror plots when simply hinting broadly in propaganda will motivate a madman with a gun to do your bidding.

Because of this, as Obama said in his speech, law enforcement "cannot identify every would-be mass shooter" and so gun control is quite literally the only reasonable option. Democrats backed up this commitment to acting like grown-ups and constructing real-world policy responses last week, offering a series of bills to improve mental health care and prevent dangerous people from buying guns. Naturally, Republicans shot down every single attempt, because at this point, actually doing their jobs and passing legislation to deal with problems is anathema to them.

Sunday night, Obama called the shooting by Syed Rizwan Farook and his wife, Tashfeen Malik, that killed 14 and injured 21 "an act of terrorism designed to kill innocent people."

Instead of fixing problems, all Republican efforts have gone towards trying to spin out a bunch of nonsense to justify the do-nothing attitude. That they would do this was entirely predictable to anyone who's watched even a minute of the Republican debates, which is why one of the Democratic-penned bills — which would have banned people on the terror watch list from buying guns — was tailor-made to bait Republicans. After all, Republicans are always eager to inflate the risk of terrorism, even going so far as to offer blanket condemnations of millions of innocent people on the off chance that one of them might have terrorist sympathies. Surely someone who thinks that "terrorism" is serious enough of a problem that we need to end our country's commitment to religious freedom and open immigration would be open to a much smaller restraint on people's ability to buy weapons almost no one actually needs that only exist to take life?

Ha, of course not. Marco Rubio in particular walked right into the trap built for him by Democrats, by defending his vote against banning people on the terrorist watch list, including the no-fly list, from buying guns. "They shouldn't be used as a tool to impede 700,000 Americans or potential Americans — people on that list from having access to be able to fully utilize their Second Amendment rights," he told Jake Tapper on CNN. "Because there are, the majority of people on the no-fly list are often times people that basically just have the same name as somebody else who don't belong on the no-fly list."

Rubio was being dishonest (shocker!), exaggerating the number of people on these lists by several hundred thousand. But even more disturbing is the implication of this comment. Rubio seems to be suggesting that it's OK to put people under surveillance and to ban them from flying, but not letting them have a gun is a step too far. Remember, fewer than 1 in 4 Americans even owns a gun, but to Rubio, being able to own one is far more important than, say, being able to travel for work or to see your family.

John Kasich also took the bait, pushing out an even bigger load with some jibber-jabber that we have to let terrorists buy guns because if we don't, they might realize they're on the watch list. Of course, denying them a flight because they're on the watch list accomplishes the exact same thing. But the airline industry hasn't bought off the Republican Party like the gun industry has.

To make all this worse, Republicans ran around pretending they were the ones who actually had a solution to the terrorism problem, though what this plan is remains maddeningly vague. It appears to be some combination of chest-thumping and clawing at the air while disdaining the Democrats for being all boring with their talk about policy and intelligence-gathering.

"We need terrorist control," Rubio bleated at a fundraiser. Cute phrase, but it means absolutely nothing, especially since he's already rejected out of hand any attempt to keep people who are suspected of terrorist organizing from buying guns.  Certainly, he can't be talking about things like intelligence-gathering or working internationally to break up ISIS's propaganda and territory-holding efforts. After all, we are already doing these things, and it's working insofar as ISIS is losing ground.

But obviously, Rubio doesn't actually care about things like what terrorism actually is or what it actually takes to fight it. His only interest is pushing right wing buttons and getting the base to applaud. Guns good! Terrorists bad! Me no likey Obama! It causes one to worry that the 2020 campaign will just feature a bunch of Republican candidates flexing their biceps and growling at the camera, dispensing even with the pretense of words.

This combination of posturing while offering absolutely nothing in terms of substantive ideas is all Republican candidates will do, from Mike Huckabee saying Obama "blew a great opportunity" without actually saying anything he'd really do differently to Ted Cruz emptily promising that he "will direct the Department of Defense to destroy ISIS," without, you know, actually explaining how that would work exactly.

Even Jeb Bush, who positions himself as the serious candidate, pulled this sleight-of-hand. "We’re at war with radical Islamic terrorism and the president continues to deny that," he said, which is a lie. (Obama may use different, more exacting language that Republican panderers, but there is zero evidence that he denies the existence of Islamic terrorism.)  "Instead of saying what we shouldn’t do, the president should encourage the American people to get behind a strategy that will work.”

It was an ironic statement, because the only thing Republicans are willing to do is outline all the things they are not going to do (restrict gun sales, be Democrats), but are absolutely mum on any realistic options for doing something. Obama, in contrast, actually did lay out a series of detailed plans and options: Gun control, targeted military strikes against ISIS, intelligence-gathering. You know, grown-up stuff.

Republicans are "critical" indeed, but that criticism seems to be little more than yelling "nuh-uh!" to gun control like a child throwing a pacifier to the floor, while preening about how they are big tough boys, unlike that wimpy book nerd Obama.

All of this should be a chilling reminder of how important it is to keep a Democrat in the White House. The threat of ISIS and terrorism in general is still relatively small, despite the recent shooting, but it's still important that we have actual adults in charge to deal with it. The last Bush administration showed the dangers of letting childish, pandering Republicans run counter-terrorism operations. After all, the Bush administration's response to 9/11 was mostly to blow it off, using it primarily as cover to invade Iraq, which had nothing to do with 9/11 and was something they were wanting to do before the attack even happened. This country cannot afford another go-round with impetuous children at the controls in the White House.