Springsteen worked slow for a reason: New “Ties That Bind” box set chronicles the fascinating and frustrating road to “The River" 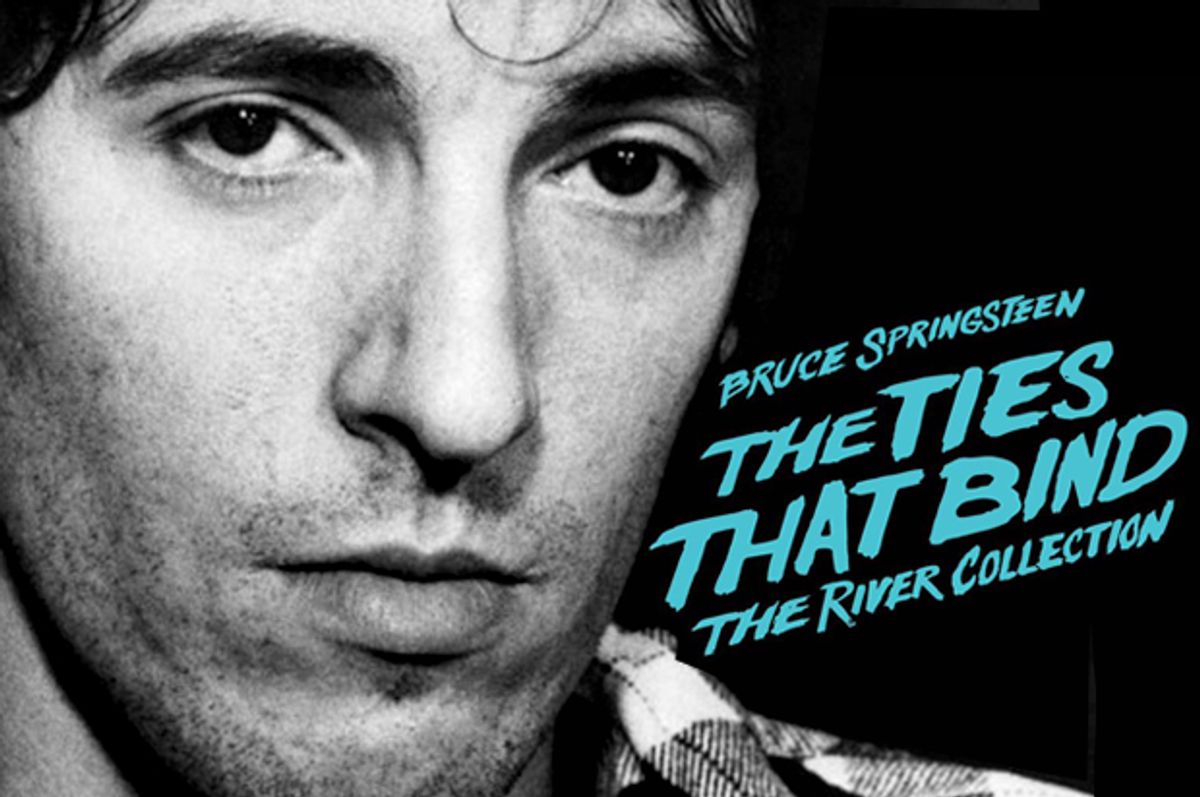 In March of 1979, Bruce Springsteen would begin work on his fifth album, the follow-up to 1978’s “Darkness On The Edge of Town.” A year and a half later, after having written (or rewritten) and recorded (and re-recorded) over 50 songs, accumulating hundreds of master tapes, preparing three different album track listings, and trying the patience of everyone around him both personally and professionally, the record was done. “The River” would finally be released in October 1980.

35 years later, Columbia Records brings Springsteen fans “The Ties That Bind: The River Collection,” a deluxe box set that chronicles not just the music created during the sessions for “The River,” but also documents the fascinating and frustrating journey behind the recording process. As you might expect with an archival box set, the set contains a newly remastered version of the final product and a generous collection of outtakes. But it also presents the original single-album version of the record that was submitted to Columbia before Springsteen changed his mind, called “The Ties That Bind.” This is accompanied by a new video documentary featuring an in-depth interview with Springsteen very candidly telling the story about the making of the album, where one learns that the rumored difficulties around the making the record were not overstated.

Springsteen’s perfectionist tendencies in the studio were nothing new. He’d pulled similar agonizing stints with "Born To Run" and "Darkness On The Edge of Town," and was quoted as saying, “That’s me, that’s what I do, I work slow, and I work slow for a reason: to get the results I want,” when it came to his approach in the recording studio.

This time out, Springsteen had multiple goals for his next record, and while attaining them all wasn’t exactly mutually exclusive, it definitely wasn’t going to be easy. He wanted to capture the feel of the E Street Band playing live, something that he felt hadn’t been achieved yet. Bruce wanted to write about relationships; he was just about to turn 30, and the people around him were settling down, getting married, having children. He also wanted to place all of this inside a larger societal context, and somehow accomplish all of this this with 44 minutes of music (the limit of a single LP record).

Through a few months of writing and then rehearsing with the E Street Band at the studio at his house on Telegraph Hill Drive in Holmdel, New Jersey, he felt he had a reasonable group of songs to start with. By demoing and then working them out with the band in advance, Bruce thought he was was being efficient: “The idea being that I would write all the songs, and spare us studio time, and I would have a relatively good idea of what I was doing before I went in,” he says in the documentary.

By early August, there was an initial cut of 10 songs (recorded at the Power Station in New York City) and Columbia began to believe they might have a new Springsteen record in time for Christmas. But Bruce continued to tinker, writing songs and making demos, and in early September, he made some changes: He swapped out three songs from the first version, added three new songs, and shuffled the song sequence to fit the new material. “Ricky Wants A Man of Her Own,” “The Man Who Got Away,” and “Ramrod” from the first version were replaced by “Cindy,” “The River” (written in late August, and debuted live the next month when the band played the No Nukes benefit concerts) and “You Can Look (But You Better Not Touch).” Springsteen signed off on the second sequence--officially named “The Ties That Bind”--and the tapes were sent off to begin the production process in early October.

But no sooner did the record come back from EQ’ing--the first step in the process of making a record--than Springsteen called a halt. “When I listened to it later on, I felt that it just wasn’t good enough. The songs lacked the kind of unity and conceptual intensity I liked my music to have,” Springsteen wrote in an essay in the set’s liner notes. But you can judge that for yourself, because the box set includes the single-album version of “The Ties That Bind.” Some of the song titles will sound familiar, but don’t skip spending time with this disc, because there are differences worth hearing, like the rockabilly version of “You Can Look,” an alternate verse in “The Price You Pay,” and a very different version of “Stolen Car.”

It was at this point that manager Jon Landau made the suggestion that maybe this record needed to be a double album, in order to be able to encompass everything Springsteen was trying to achieve. So, back to the Power Station they went--for another seven months before the sessions would come to an end.

More than 50 songs would be considered as candidates for the record during the 18-month recording process, and 20 of those would make it onto “The River.” The box set assembles 25 of the rejects, so the listener can dig into Springsteen’s studio output and make their own judgment call about whether the right songs hit the cutting room floor.

About half of the outtakes from this time period were included on Springsteen’s 1998 “Tracks” box set of unreleased songs, so most diehard fans will already be familiar with them. That said, it still makes sense within the concept of this release to have all of the available material from this era in one place, even if it might be duplicative for the super-fan. That leaves 10 songs that are being officially released for the first time.

(Some trainspotting: A studio version of the instrumental “Paradise By The C” is included as an outtake, existing previously only as a live cut on the “Live 1975-85” box set. It’s definitely vintage, as there’s no doubt that Clarence Clemons and Danny Federici are playing on it. But no recordings of the song appear on the studio logs from this era.)

Some highlights from the outtakes:

There was definitely some modern-day sweetening of some of the outtakes in order to bring them up to release quality, but comparing them to existing bootleg outtakes, it’s not done with a heavy hand, and doesn’t detract from the historical value of having these tracks available. (There are unfortunately no detailed notes in the set to help armchair archivists.) The big question regarding outtakes on a set like this is always: Did anything get left behind? The answer is no, nothing of substance got left behind from the Power Station sessions, and anything only recorded during band rehearsals at Springsteen’s Telegraph Hill studio wouldn’t be fit for release; Telegraph Hill was less a studio than it was a large room in the house that could accommodate the entire band (see pages 19-20 in the box set’s photo book), and the recordings made in that space were obviously for reference only as there is zero separation and Bruce’s vocals can be inaudible. So fans can (and should!) lament there aren’t studio recordings of (for example) “Chevrolet Deluxe” or “Janey Needs A Shooter,” but the lack of inclusion isn’t an oversight.

The E Street Band hit the road behind “The River” at the beginning of October 1980, and would remain on tour through the fall of 1981. It’s in early-tour form that the box set’s piece de resistance is captured, via pro-shot footage of the band’s set in Tempe, AZ, on November 5th, 1980. (The Tempe footage is covered in more detail here.) There’s also a disc of 20 minutes’ worth of pre-tour rehearsal footage, where the band works out their moves on the tour’s stage setup. The last video element is, as previously noted, the “The Ties That Bind” documentary, 60 minutes of recent interview footage, created specifically for the box set. (You can read more about the documentary in more detail here.)

Finally, the physical packaging of the set is good, but not quite up to the award-winning standards of the “Darkness On The Edge Of Town” box (which won the Grammy for Best Boxed Or Special Limited Edition Package). There’s a 148-page coffee table book with 200 rare or previously unseen photos, some with occasional handwritten captions from Springsteen; in the one titled “Listening to playback” on page 16, every member of the band appears to be in acute pain. Lyrics are presented in a replica of one of Springsteen’s work notebooks (on which he’d written “Bossenheimer Jones” in the “Name” field; the fact that he included that says a lot about him, for good and bad). The book includes an essay from Mikal Gilmore, who reported on Springsteen in the '80s, and one from Springsteen himself, recycled from his “Songs” anthology; he notes, “Looking back it pretty much says it all,” which seems just a tad thin given the context of the release.

“The Ties That Bind: The River Collection” is a comprehensive and immersive package that succeeds at capturing not just the history of an important record, but also manages to bring fans into the artistic process behind the music.